Legendary Truth monitors the web. It’s been a fan favorite interactive experience at Halloween Horror Nights for several years. The experience has taken the theme of Halloween Horror Nights, and expanded it into the parks and online through interactive games, in park tasks and special meet ups. Though the interactive experience has been a huge part of the event in the past two years, it was noticeably absent for HHN 24. Instead, Universal has chosen to build up their social media impact for those casual attendees with HHN Compound. While Compound has been a huge success for fans and Universal, it hasn’t drawn the same level of fanaticism that Legendary Truth has. However, with four nights left in the event, Legendary Truth is returning…and the truth is now in your hands. 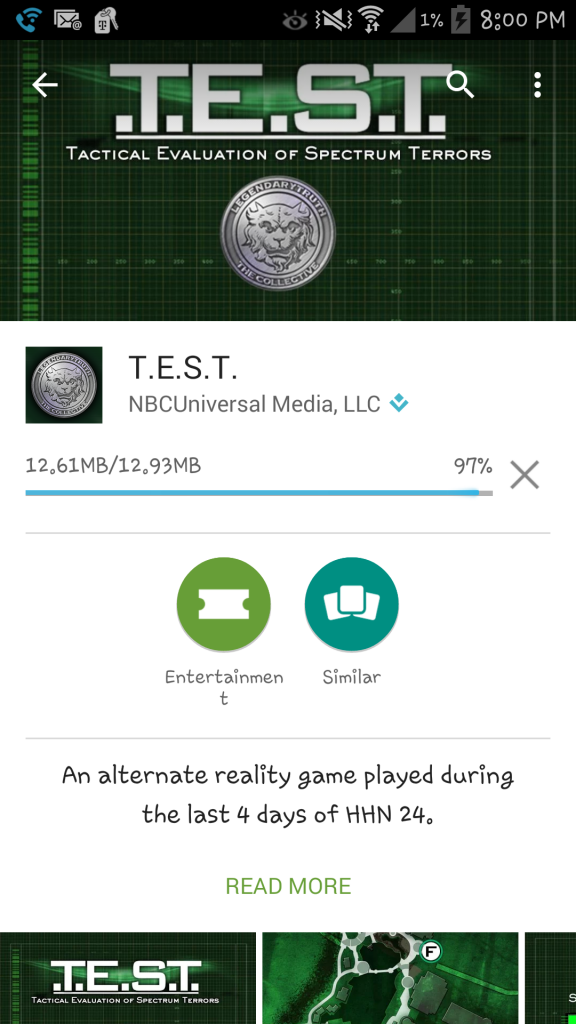 An all new mobile app called T.E.S.T. (Tactical Evaluation of Spectrum Terrors) has surfaced online and is geared towards continuing the Legendary Truth tradition. For the final four nights, members of the Collective will be put to the test, scanned and loyalties measured as Legendary Truth continues the story. 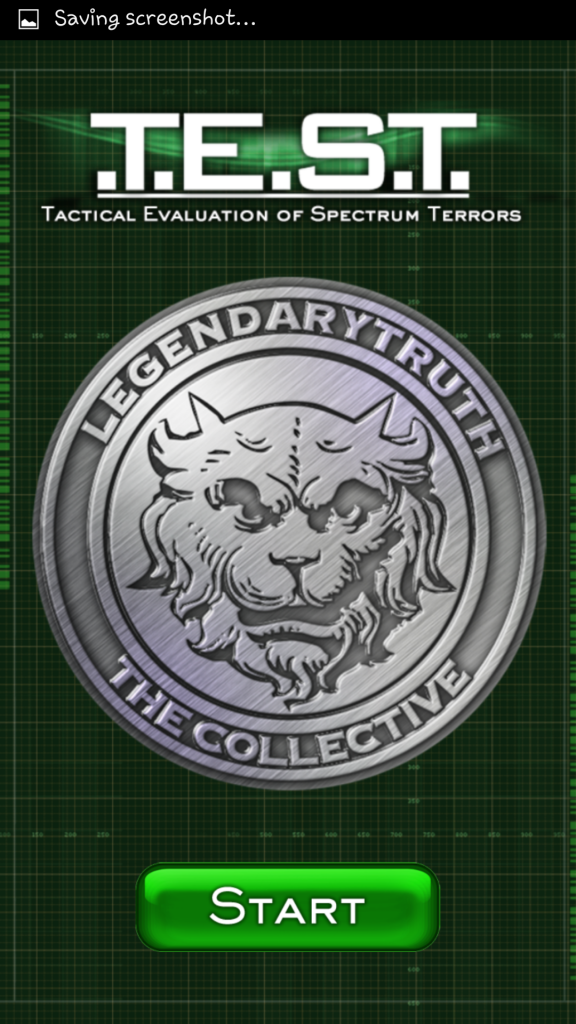 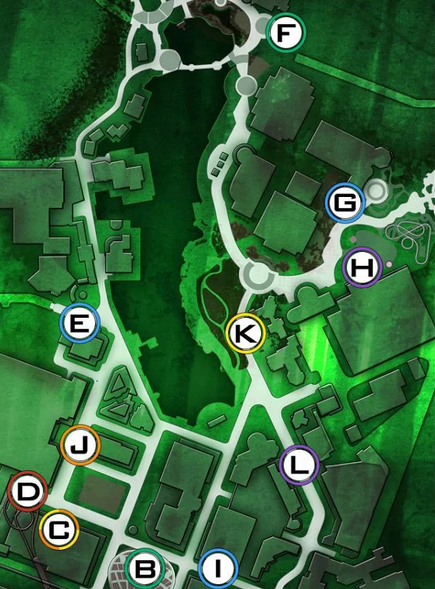 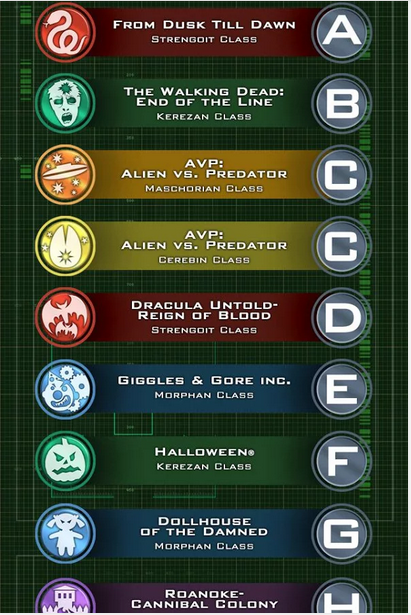 The app is available in the Google Play Store (more than likely in Itunes as well), and is free to download. You’ll have to have your bluetooth enabled, as it will be used for the game. The game will take Collective Members through several tasks, each based on the “Legions of Horror”. The houses and scare zones are, naturally, matched to each one of the legions.

Like everything that Universal’s  A&D Team does, there’s several meanings. They are all hidden meanings, but with enough digging, they can be found. 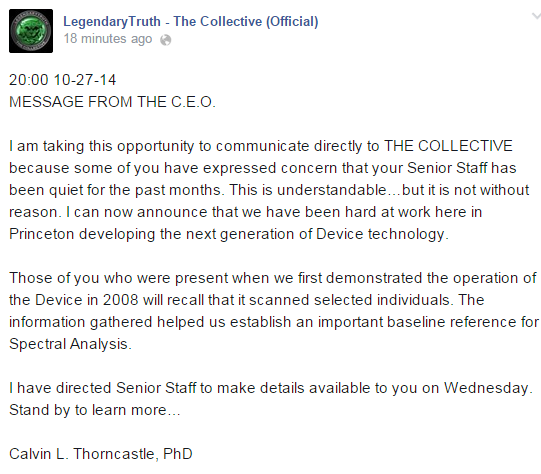 Additionally, the official Legendary Truth Facebook Page has been updated with several new teasers, including information about the new app…without saying it’s about the new app. So what does this all mean? Why would the park release this now, on the final four nights of the event? Traditionally, the event is very slow on the final nights, especially when Halloween falls on a weekend. This will draw in huge crowds of fans who love the games. But there’s also the chance that we will get to see a clue as to what is coming for next year’s Halloween Horror Nights. It will be the 25th year, and there’s a lot of horror history to revisit.

We haven’t gotten confirmation of this, but we are hearing a big rumor that there will be a ninth house added to Halloween Horror Nights. This isn’t confirmed, but we are hearing that towards the end of the night tonight, an entrance for the house will be revealed in the New York area, near Macy’s. The house will be directly tied to the games, so you’ll have to play to gain access. Again, this isn’t confirmed, so if you’re in the park tonight, we need to hear from you!

While at this time there is no extra house, the task had players find six “Legion Markers” in the park. The good news is that if you couldn’t get all six in one night, you could pick up where you left off. 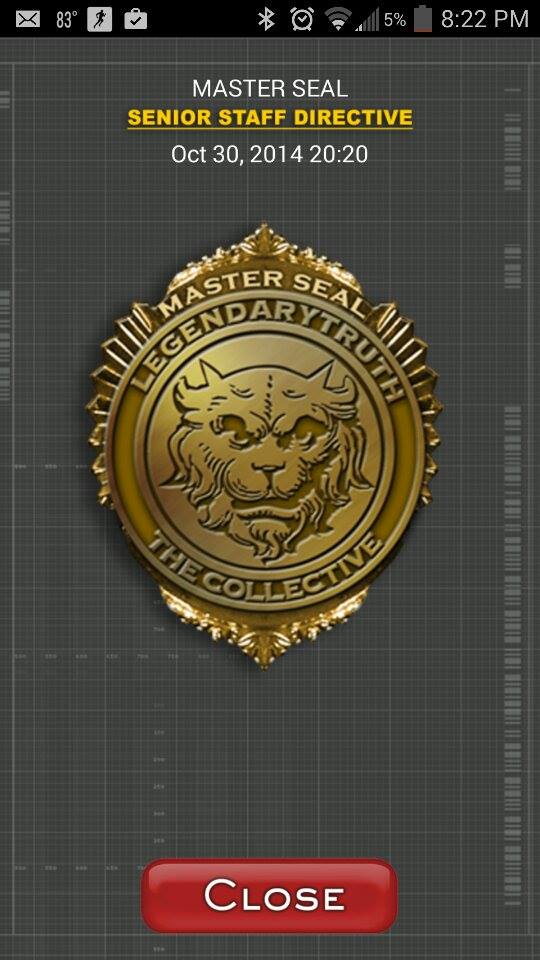 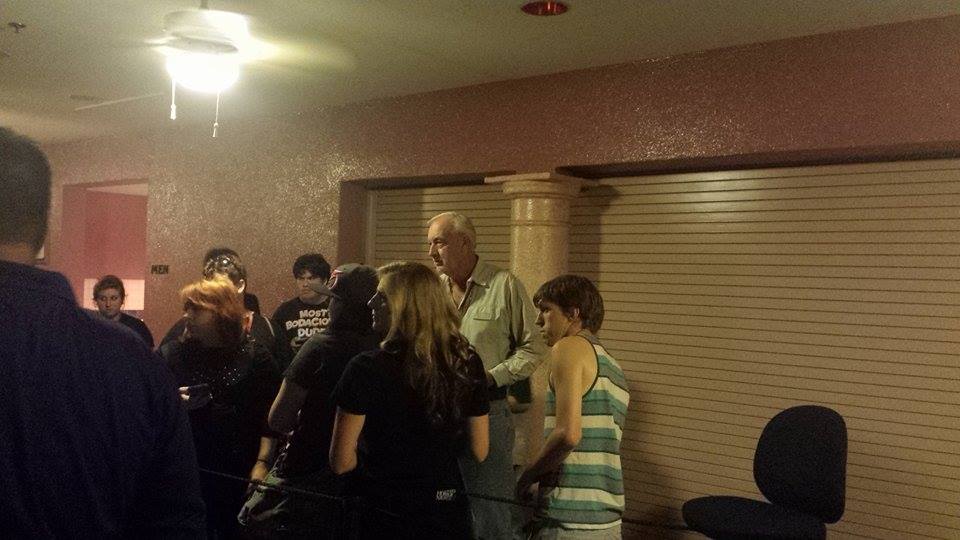 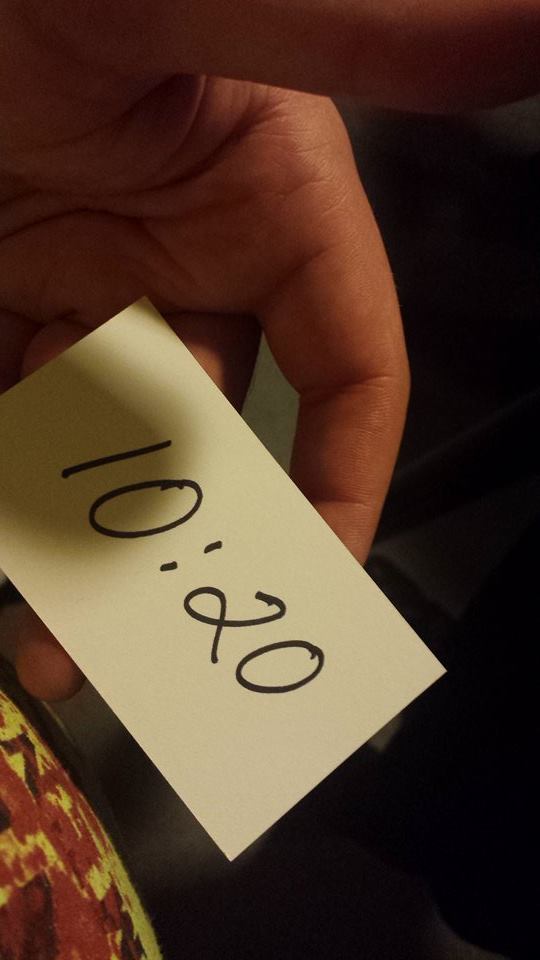 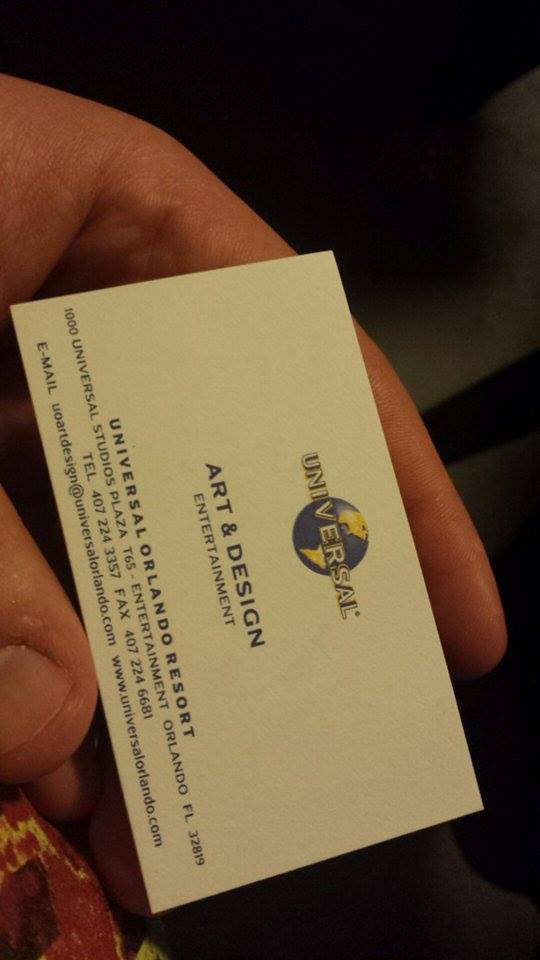 Members of the Art and Design Team were on hand to congratulate those who completed the task, and to also give yet another task. The time for the first group will be around 10:20 or so. The rumored area for a ninth house is located near Macy’s in the New York area. 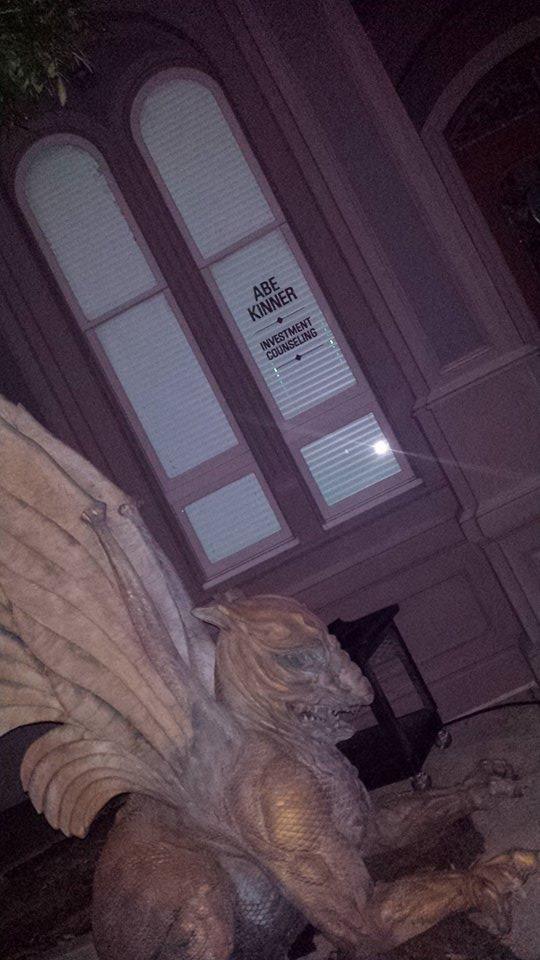 Curiously enough, the Legendary Truth Statue, which was a huge focal point in the past few years of the event, has been spotted outside the area. There’s a good chance our rumor is true.

After the waiting, and puzzling, the rumor is true. Sort of. The Legendary Truth end game, so far, is to be able to explore what can only be described as Legendary Truth headquarters, or a branch of it. The experience took guests inside the Macy’s area, near Mummy and placed them among artifacts. There were props from the first HHN, as well as maps from others, and props from Bloody Mary. The objective here was to find out the killer of a Legendary Truth operative, Mr. Singleton. The investigation would take guests into several rooms, and give them a tablet that would help the investigation. The guests had to surrender all phones and cameras.

The investigation combined actors, props and videos, creating a very unique and startling environment. It took guests into the past, and connected old storylines from Legendary Truth. While the story was new, everything is connected. The use of new technology here was impressive, and the experience definitely had huge potential for future uses in the park. Guests were also told that the experience was in technical rehearsal.

So why wait until the final four nights of the event to unveil all this amazing storytelling? Simply put, there was so much to see at the event this year, that this experience would distract from. It appears that the team wanted guests to see as much of the event as possible, enjoy it, and then go on a mission during the final nights. The mission would have guests running through the streets, and into different houses which, if you only had one night at the event, would eat all of your time. It was under technical rehearsals, which tells us this experience will be coming back. It’s possible that we could see this used as an upcharge house, or VIP experience. The themeing and storytelling in it was what you would expect from HHN.

Want more? Here’s a brief run down from FUBAR-It’s very spoilery, so read ahead with caution.

We met at the gargoyle statue in NY by Macy’s and were escorted in to a meeting area. It had lots of LT signs and a standing board with lots of LT history on it. There was also a screen with the LT logo and 3 LT operatives had us sit with 3 others. TJ Mannarino came out and described the experience and stayed in character as an LT member until he reminded us that it is a tech rehearsal and then asked for feedback and critiques on the test app. We watched a video from Calvin Thorncastle regarding the history of the LT and our mission to find the killer of their operative Mr Singleton. Our group was separated into groups of 3. At this time we were asked to surrender our phones and escorted to a new area that had a table with body parts on it. All had LT logos and we were given a tablet to scan them with. We then matched the body parts to the legion. We were asked to then observe the various legion artifacts and this is were things got crazy. Alarms went off and green fog jets went off. We were wrangled into a containment device and scanned for ecto residue. We were then released to a second area were a scientist asked us the effects of the previous encounter. We were all fine and so we went to a seance room that had a table with all the legion symbols on it. We along with a scientist used the tablet to create a rift/ vortex in a circular motion and words began to occur on the screen. Over the next few minutes sounds and growls started happening on parts of the room until we stopped and were told we may have encounters a level one. We were led to more scientists who argued over if it was a level one. We were given a smaller tablet and instructed to make sure we did not have any residue. We were looking all over the place and tipped of to look at the walls which had writing on it. After about five different spots we were hesitantly brought to the final room which was a funeral parlor. After a bit we were told to look at the painting next to the coffin which was a stormy lighthouse picture, On the tablet we saw the ghost of the man in the coffin and he spoke of the death of Mr Singleton. At the time he said he observed the killer and the killing. One of us asked if it was the person known as old lazy bastard and the ghost interacted with him and said yes, it was old lazy bastard. We were having direct contact with this entity and he continued to speak of this mission and then we were cut off. This was where the experience ended. We left this room and then were given our phones back and we had a LT photo op. It was a very fun interactive experience and I hope they do more f this stuff. The app was really fun as well today with direct interaction with actor who either brought life force up or down positive or negative.

Very special thanks to James and FUBAR for keeping us updated throughout the night.