One thing that most people love about haunted houses in October is that they know what to expect. There’s a certain feeling of safety in that. You don’t really know where the scares are going to come from, you’re not really certain of what kind of scares, but you know the typical scares you’ll get. If you’re a fan of theme park haunts, you also know that there’s a certain line they will not cross. It’s safe. It’s a warm blanket that you can take comfort in, all while pretending like you step out of your comfort zone. For the second year, The Shallow Grave in Winter Haven, Florida is making you stepping out of your comfort zone. They make you think that it’s just another haunted house, and that you’re going to experience the exact same thing at their haunted house that you will at the big name haunts. They make you think that, and then out comes Thadeus, and you know right then and there, that they lied to you. We had the chance to check out the two haunted houses at The Shallow Grave. We were not prepared for what we faced. 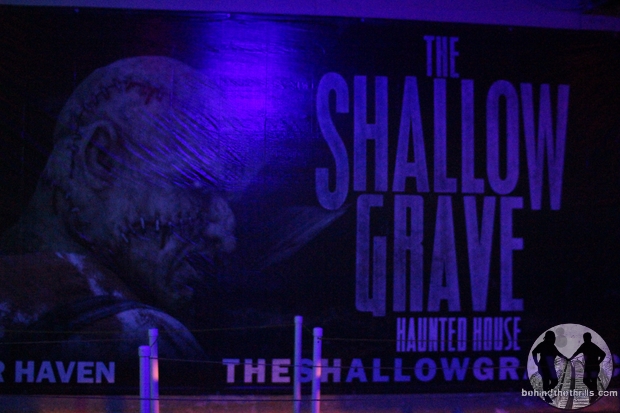 That’s it. That’s the negative. 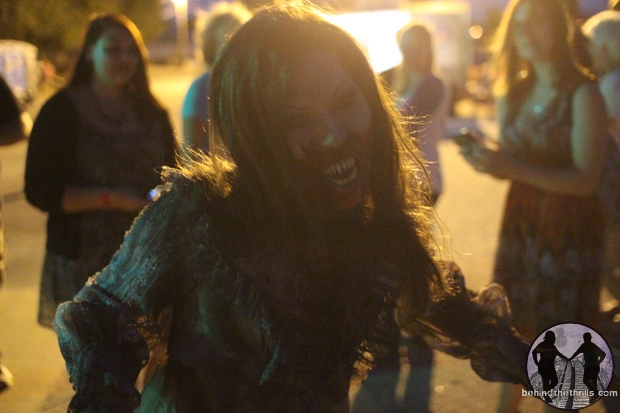 The location of The Shallow Grave is out of the way, but somehow that adds to the total experience. The haunt is located inside an old warehouse facility. You half expect zombie rednecks to come spilling out of the building on a regular day. What looks like an unassuming building is home to one of the most horrific haunts in Central Florida. 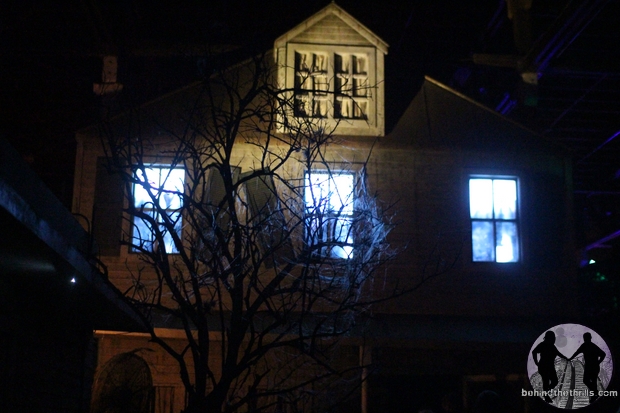 The Shallow Grave is actually two haunts in one. First, there’s Haunted Hills. The story of Haunted Hills begins during the Great Depression. He was a local caretaker that loved his job, and was good at it. As times got harder, the dead piled up. However, the money didn’t. That left his family hungry and broke. There’s something that can snap in a man when his family suffers, and it snapped harder in Thadeus than it’s ever snapped in anyone. He began to feast on the flesh of the dead, feeding his family. As times began to get better, the bodies stopped coming, which again, put the families on hard times. Only now, it was the hunger that human flesh created. Thus begins the story of Thadeus Van Buren, the madman of the cemetery. The souls of those he ate try to drag him to hell where he belongs, and the living try to stop the madness that he’s become. Haunted Hills takes you through the madness, and gives you a chance to escape Thadeus and his family.

Those that escaped were never the same, and suffered from ADHD (Attention Deficit Haunt Disorder) for the rest of their lives. The encounter drove them mad, and their every fear became a nightmare they couldn’t escape from. 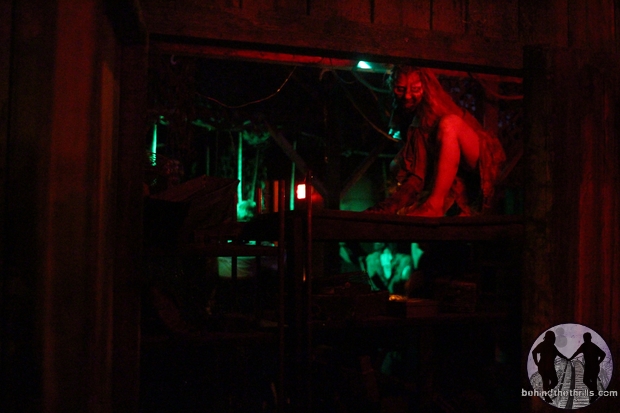 Haunted Hills gives guests a steady onslaught of mayhem as they are stalked, chased and scared throughout the entire house. There’s several great moments in the house where you think something is just a prop, only to see that it’s a real person. The house does a great job of bringing Thadeus to life, and bringing his anger and madness at you from all angles. He is a classic slasher waiting to happen. The house uses actors, and props very strategically. And the attention to detail is just the same, if not better than some of the larger theme park haunts. The facade to Haunted Hills alone is very immersive. 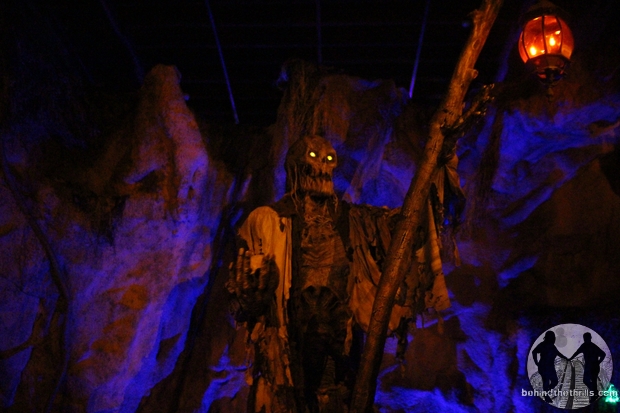 ADHD offers a variety of different scares and tactics. There’s giant puppets, and do we mean giant, the classic boo doors, and several distraction scares. ADHD takes just about every typical fear, and puts in a big bloody blender, and dumps it all over your head. Spiders, snakes and clowns are just a few of the fears that ADHD preys on. The tactics are also a little over the top, and shocking. We don’t want to give anything away, but there’s a scene where your natural reaction is to back up. Then you feel a slight tingle in your back. 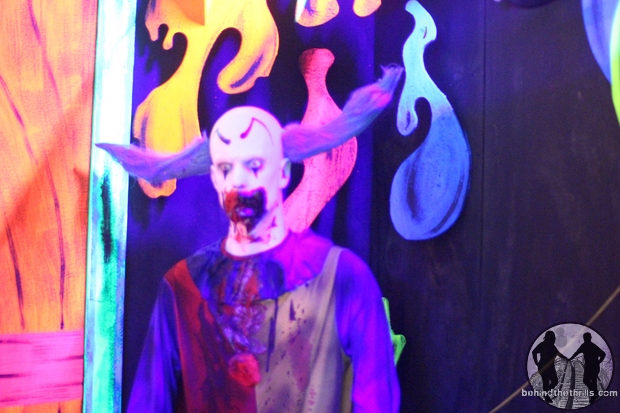 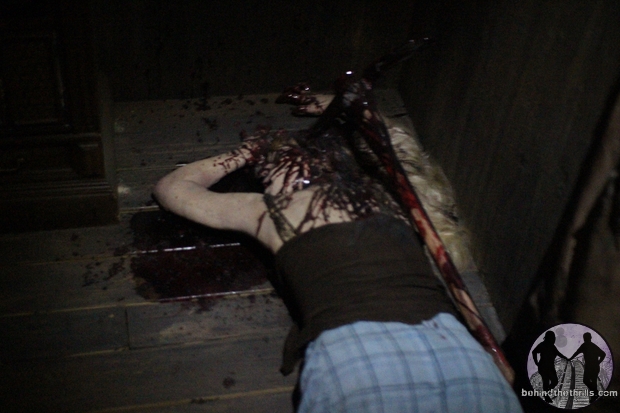 In fact the entire experience, from Haunted Hills, to ADHD gives you the feeling that you’re not safe. Haunts are supposed to be like that! You’re supposed to have this illusion of being scared, but you know in the back of your head that you’re safe. And that’s where The Shallow Grave differs. Yes you’re safe, but they do everything in their power to break that illusion that you have in your head, and make you think that you’re not. They do this by tipping things over at you, pushing things in your face, following you, and touching you. Yes…they CAN touch you. That’s not something that Central Florida is used to. You’re told by all these haunts that they will not touch you. Here, they can. Will they? Maybe…maybe not. 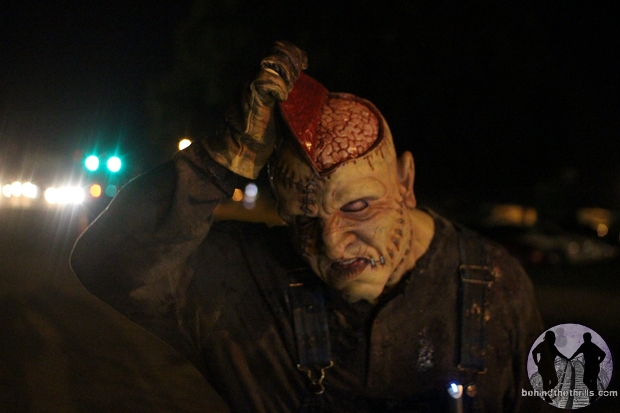 In haunts around the country, they call haunts that touch you “extreme houses”. With Shallow Grave, the experience of being touched isn’t “extreme” because it’s not the touching that is scary. The rest of the damn house is scary, and being touched, IF it happens, is just part of that experience. The touches never come in inappropriately, or aggressively. They are usually bumps by actors, or brushes of the hair or shoulders. There’s nothing violent, or even harmful in the way you’re touched, and most of the time they WON’T touch you…but the thought that they can, and could gives you a whole other feeling of dread. 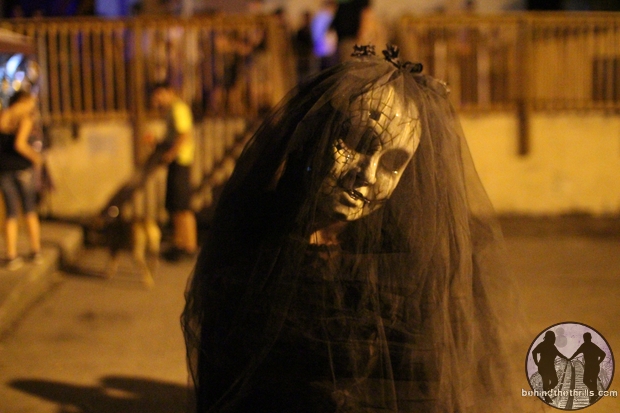 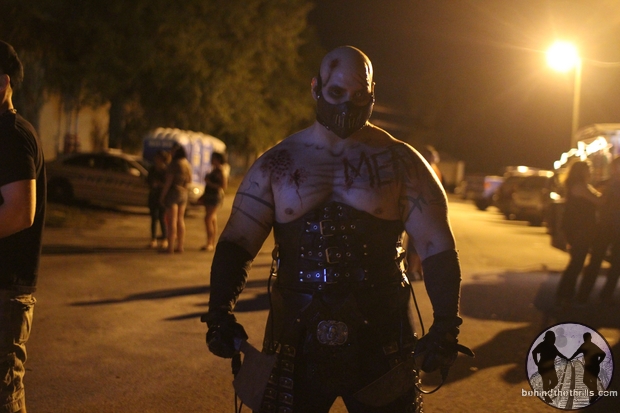 The scares don’t stop once you’re out of the haunt either. Actors roam the parking lot, chasing guests from place to place. We saw one person seek refuge in a port-o-potty, only to have it rocked violently by the actor. While the props and scenic of the haunt really makes The Shallow Grave a must see, it’s the actors that do the house the most good. It’s their performances, and dedication to the roles that push what could be just another haunted attraction over the top. It’s also worth noting that the staff is made up entirely of volunteers. That should scare you right there. They don’t do this for the money, but for the love of scaring the hell out of you.

The Shallow Grave is open on Thursday-Saturday nights from now until November 1st. The haunt is located in Winter Haven, just a short drive between Orlando and Tampa. It’s only the second year of the haunt, but they have already expanded, and are looking to make more changes for the coming year. Unlike the other haunted attractions, The Shallow Grave only allows small groups in at once, which gives you a very personal experience. It also means that the lines can get long on busy nights. They do offer a FearPass, which allows you to cut the normal line. It’s totally worth the extra fee to get right to the fear. Merchandise and food are also available for sale on site. It’s very clear that the cast and crew of The Shallow Grave are dedicated to what they do, and love it.

Stay tuned for more gory goodness as Halloween gets ever closer, and be sure to get social with us on Facebook, and follow along with us on Twitter @BehindThrills for the latest updates!

For more information about The Shallow Grave, including tickets, visit the official website by clicking here!