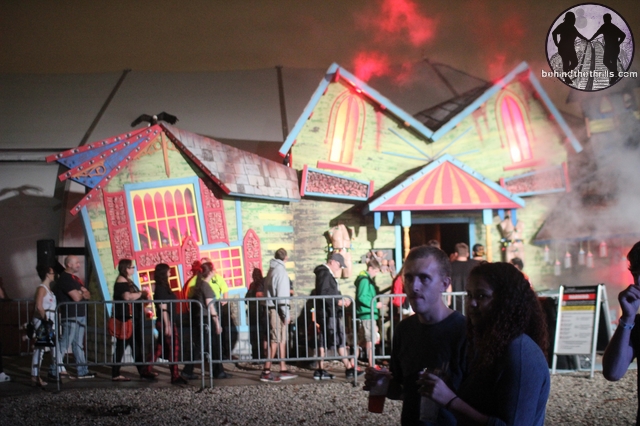 Unmasking the Horror #2-Dollhouse of the Damned

Dolls are inherently creepy. There’s something about them that really kind of eat away at us. Maybe it’s their dead glass eyes, or even the way that they just seem to see everything. It doesn’t help that there’s tons of stories out there about demonic, evil, or just plain creepy dolls. Annabelle hits theaters in October, and tells the story of a doll possessed by a demon. Universal Orlando takes it one step further this year with Hallowen Horror Nights and their house-Dollhouse of the Damned. 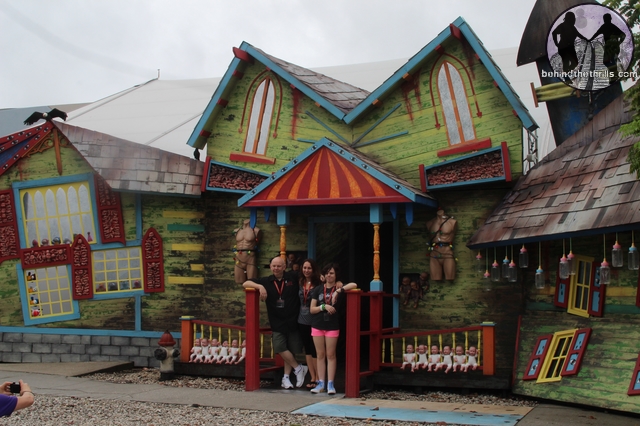 Like all haunted mazes at Universal Orlando, Dollhouse of the Dead has a story. However, unlike most of the houses, the characters came first. Dolls were just plain creepy, and the characters for this house came about naturally. It was the house that had to be created later. And so the story of the Dollhouse that appeared out of nowhere was born. The house itself is made up of doll parts, and pieces. The idea actually came from the actual Isla de las Munecas (Island of the Dolls) just outside of Mexico City. The island is littered with thousands of dolls that were meant as tribute to a little girl who drowned. One man placed a doll, and slowly thousands of others began placing dolls. 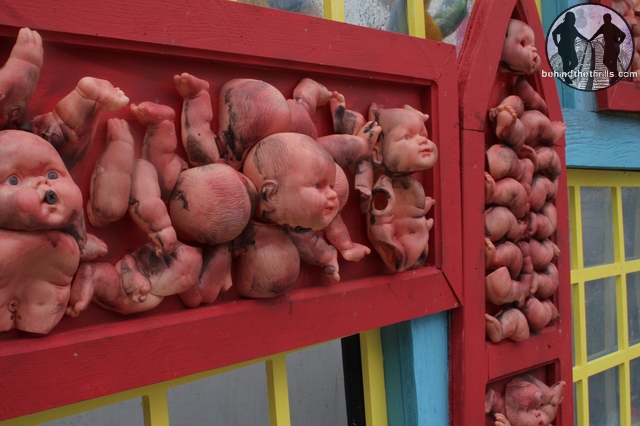 It’s a bizarre tribute that sparked and even more bizarre idea. The dollhouse appears out of nowhere, and the dolls are actually made out of those foolish enough to walk inside. Inside there’s a demented little girl who keeps everything and everyone that happens inside her dollhouse, and uses them as her playthings. 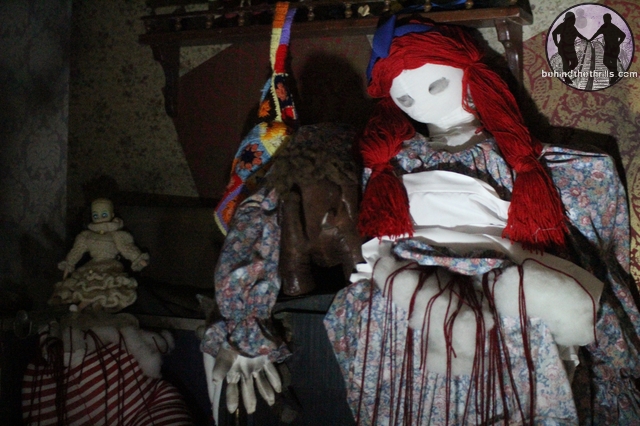 The house has just about every type of doll imaginable. The first room includes yarn dolls, and has a special appearance from Raggedy Anne. Fun fact, in the movie the Conjuring, Annabelle is a porcelain doll, but in real life Annabelle is a Raggedy Anne doll. She’s present in Dollhouse of the Damned. This room also uses some very unique techniques to create your first big scare. An actor portraying a yarn doll being torn apart is a huge distraction while “button boy”comes from another area. 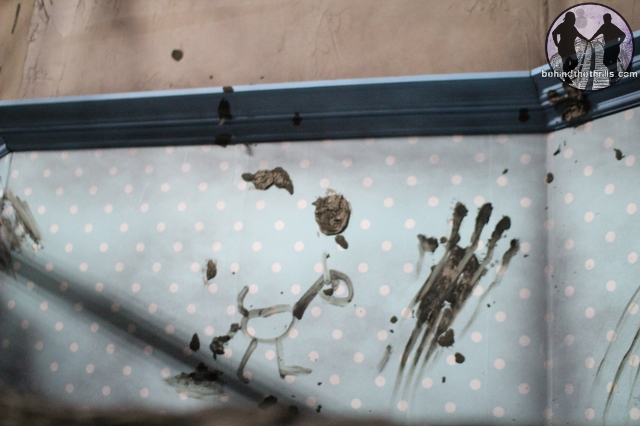 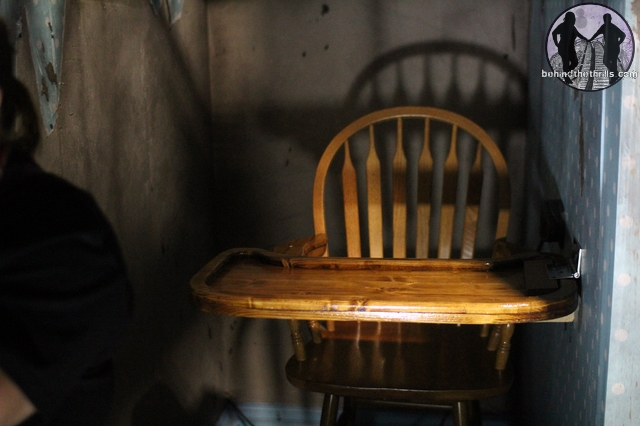 Baby dolls are a huge part of the house, and they are brought to life with very unsettling results. The babys are represented as actual babies, and their signature smell of baby powder and poop is very much present. The effect is achieved by special fog additives that are pumped through the room. Different smells make up much of HHN, but this one is a very distinct smell that brings the scene to life. Another way the scene is brought to life is the use of larger than life sets. Guests are shrunk down, as the cribs are blown up to make it seem like the babies are the right size. Here they use mirror effects to get a huge scare, that and  huge headed baby helps. 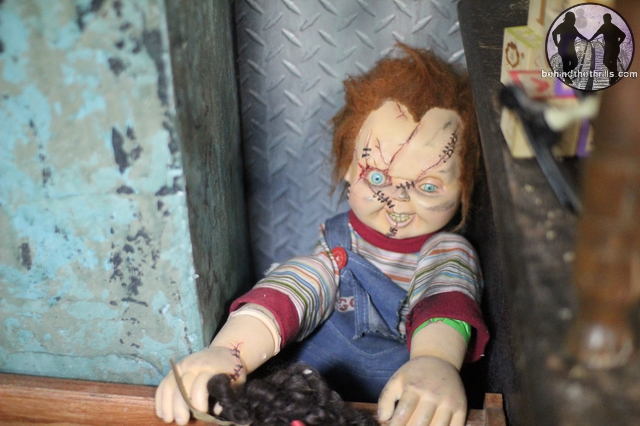 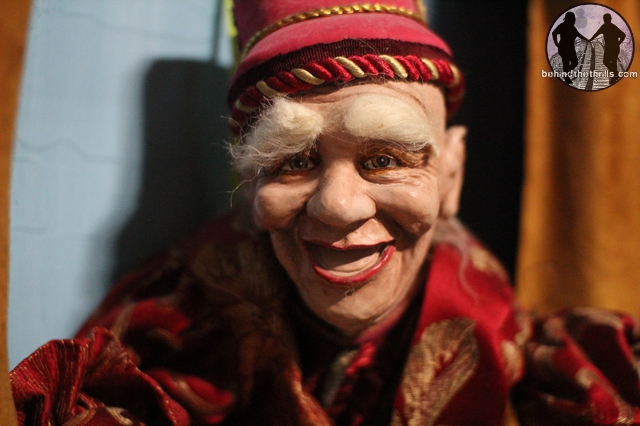 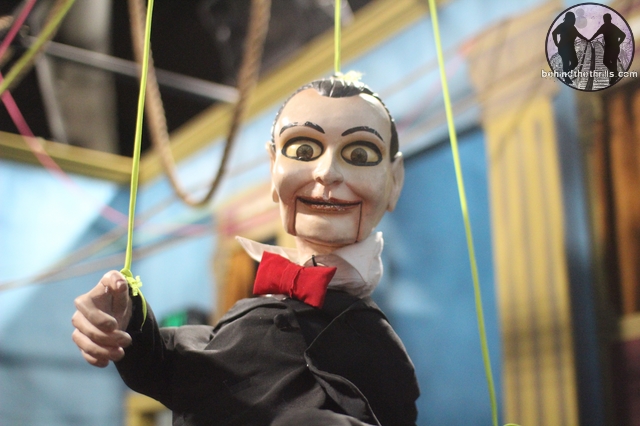 Famous creepy dolls also make an appearance in the house. Guests can expect to see Charlie McCarthy, Chucky, and Billy from Dead Silence as well as many others. Annabelle is said to be creeping about, as well as the famous Robert the Doll from Key West. Robert is the most demented doll of them all, as bad things are said to happen to anyone who doesn’t ask his permission to take his picture, or say nice things about him. We love Robert, he’s such a good doll, and we hope that someone else finds him. 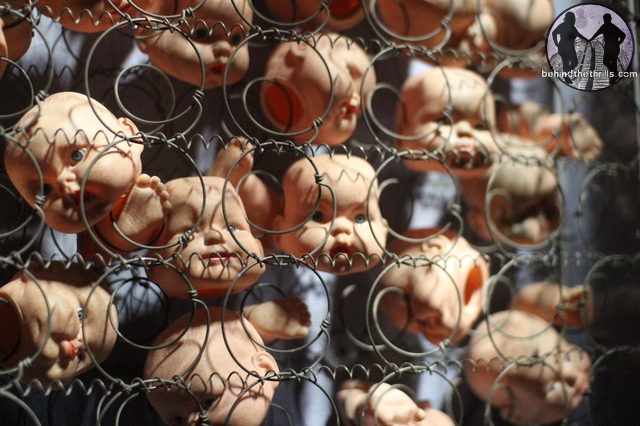 Dolls were found at toy stores, thrift shops, and other places to create Dollhouse of the Damned. The creators had to rip the heads, arms and legs off of thousands of dolls to give this creepy house it’s very evil vibe. After all, what’s worse than dismembering toys? 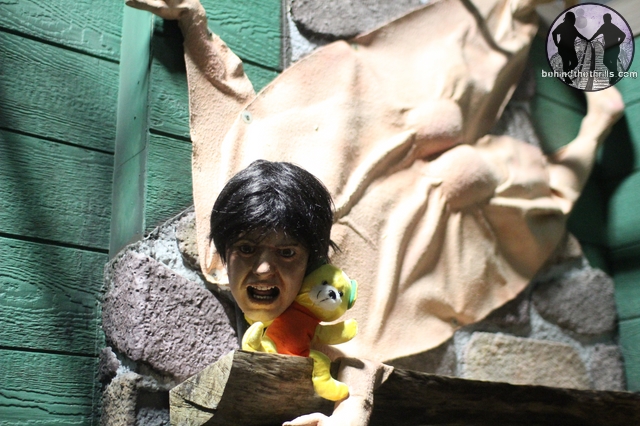 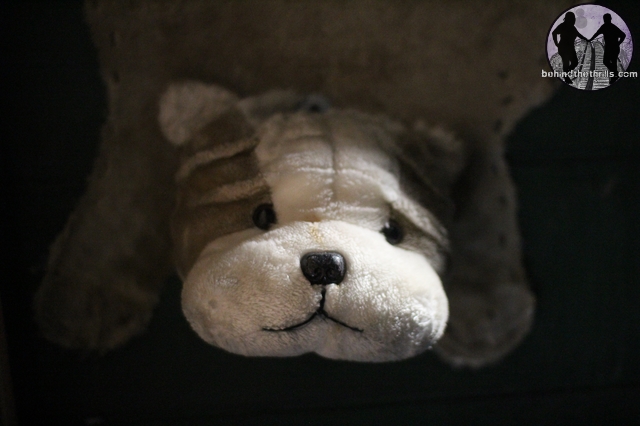 It wouldn’t be a dollhouse without some wild game stuffed on the walls. Teddy Bears are the choice game, but they are only a second to man. Teddy bears, interestingly enough, were named for Teddy Roosevelt, who actually rescued a baby bear. The bear was meant to be a joke, but the man was so damn tough that they became a childhood institution. Teddy Ruxpin, a talking teddy bear from the 80’s can be spotted mounted to the wall. 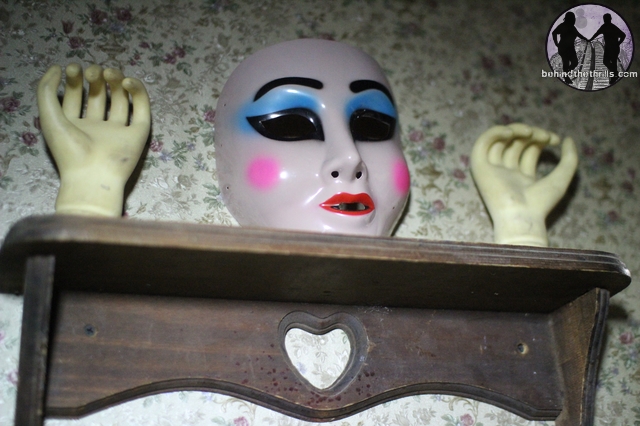 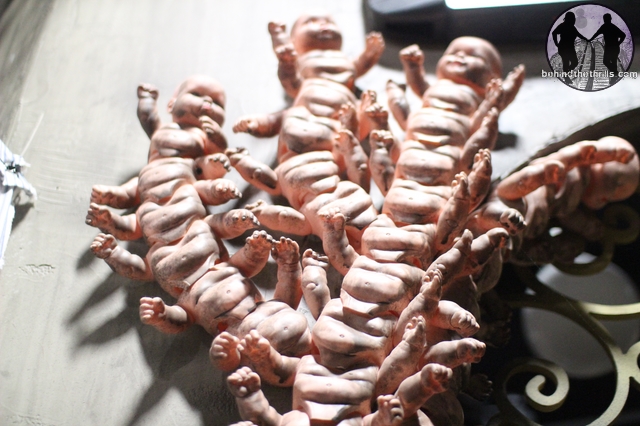 Tributes to horror films are found all throughout the house. Universal did “The Strangers” in a scare zone a few years ago, and one of the masks from that scare zone can be found. There’s also a baby doll version of “the human centipede” which looks like it’s ripped right out of your nightmares. 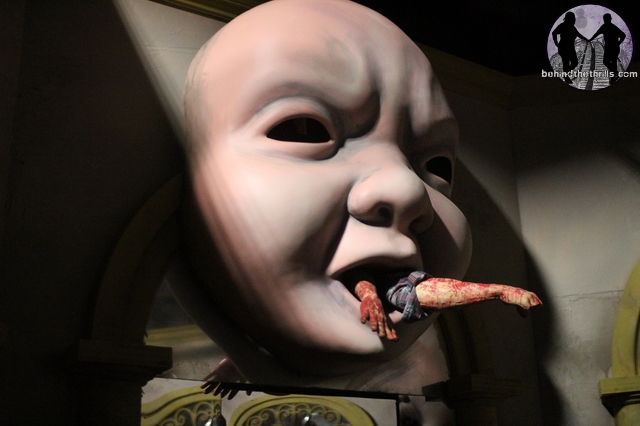 These huge heads are meant to be guardians of the dollhouse, eating those who try to escape. They are probably the most nightmare inducing thing in the whole damn house.

Dollhouse of the Damned is one of six houses that guests can venture through in an Unmasking the Horror Tour. The tours run about two hours, and are available only on event nights. Seeing Dollhouse of the Damned in the daylight didn’t help the creepy factor at all. It’s just as disturbing (if not more so) during the day. Fans of Annabelle and other murderous, creepy, demonic dolls will love this portion of the tour.
Slideshow-Check out even more creepy details in Dollhouse of the Damned!