When it comes to recognizable horror icons, you don’t get any more recognizable and more iconic than Michael Myers. The Halloween franchise has spawned 10 films in total, some being direct sequels, others films that they wished had never been made. Throughout ten films, however, it’s solidified Michael Myers as the most terrifying slasher ever. This year Universal Orlando brought Michael Myers to life by giving him a maze all his own. The team has recreated one of the most recognizable films in history by taking guests and putting them in the movie. They are stalked, hunted and stabbed as they retrace the steps of Michael Myers. The Unmasking the Horror Tour takes us into some of the secrets of the all new house at Universal Orlando, and it all starts with the front of the house itself.

Video-Watch as evil is born in Halloween at HHN 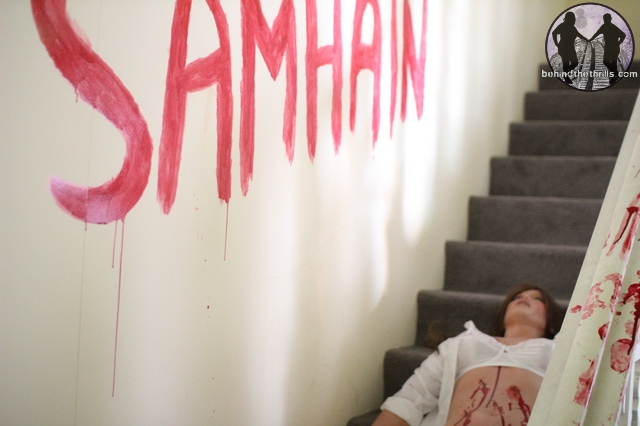 There are a total of ten films in the Halloween franchise, and only nine of those films dealing with Michael Myers. The first three films are some of the most iconic films in horror history, and the creators at Halloween Horror Nights have paid tribute to those films with little nods and Easter Eggs all through out the house. The first nod is the word “SAMHAIN” which is a heavy theme in second film. Samhain was used as the original inspiration behind Halloween. It’s the Celtic name for Halloween, and the writers took the script back to the original idea of Samhain being the night where all souls are let out from where ever they are to wreak havoc on the living. In that belief, you can’t kill evil, evil pure and simple is undefeatable which is the perfect explanation of Michael Myers. There’s also one of the first kills we see laying on the stairs, as the blood is smeared all over the walls. As guests come around the corner into the first hall, the mirror also has a nod to Halloween 2, with Michael in the clown costume holding the knife. 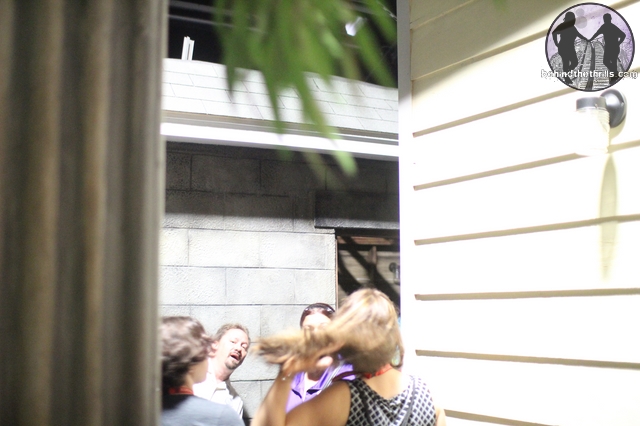 The maze takes guests in and out of the house, winding into the yard, between the house and the garage and back in. The scenic team built the houses almost to full scale, so that the guest never leaves the experience. They wanted the guests to feel like they were walking in the real house, and down real alleyways, just like Michael Myers did, so they built the houses to huge scale. There’s a part in the film where a dog is killed, it happens off screen, and in the house you also hear it. It’s a very effective part that acts like a bit of a distraction. Speaking of sounds, the soundtrack is exactly the same as it is in the film, with little stabs and sound queues sprinkled at key points in the house. 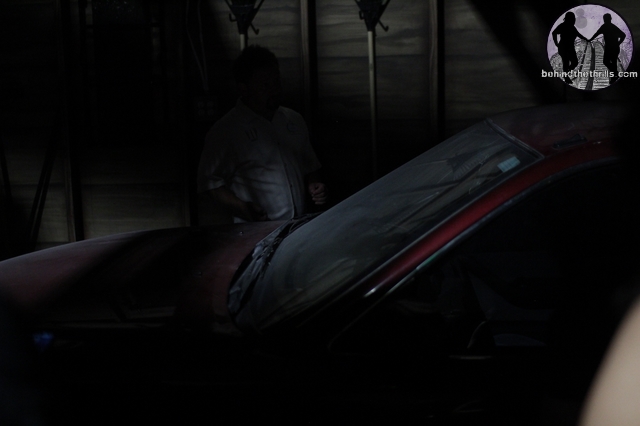 The scene in the garage is again taken straight from the film. Guests walk in and see a teenager struggling with Michael Myers who crept into the backseat of the car. The car is real, and functional, it’s been rigged with lights and sound to recreate the perfect scene of Michael Myers strangling a victim from behind. The way that it’s done is that Michael Myers is a dummy, while the girl just wraps his arm around her and acts like he is strangling her. It’s a simple, yet very effective trick that makes for a huge impact. 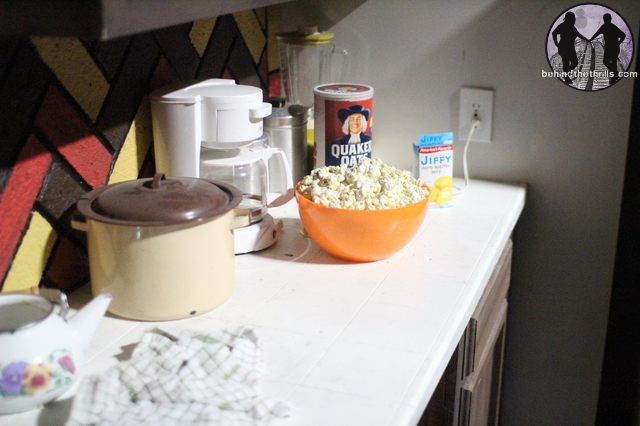 One of the challenges in creating the look of the 70’s from Halloween, was to actually have a look of the 70’s. The more time goes on, the harder it is to find things that match that look. Things like the stove were very hard to find in the exact same colors, so similar items were found and simply painted to look like it. If the kitchen looks a little familiar, it was the same kitchen that was used in 2013’s Evil Dead house. It’s very common for Halloween Horror Nights to reuse certain props and items from previous year’s houses. Items such as popcorn are real edible items, only “preserved” with special chemicals, nailed and glued down to keep the scene in tact. 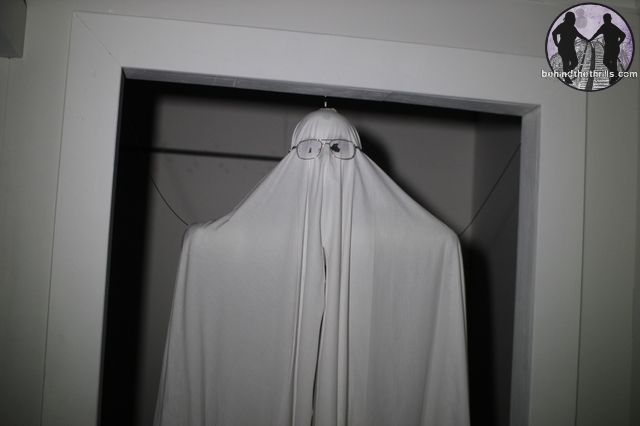 Very simple effects like the “ghost” effect provide for very good scares, using very cheap and very basic effects. The ghost is a very iconic moment from the film, and in the house it’s used as a great scare area, as an actor can pop out from behind the sheet. 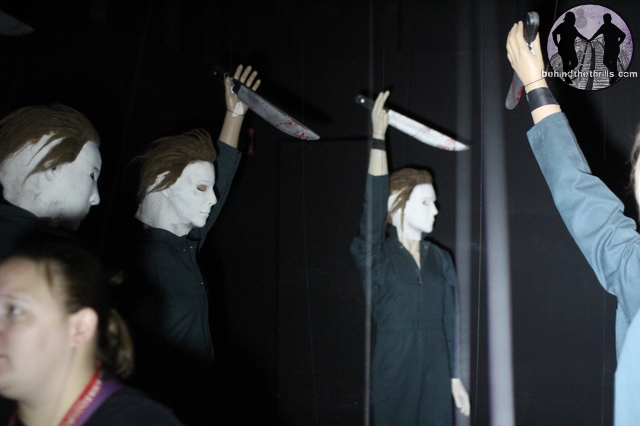 One of the most terrifying scenes in the Halloween maze, isn’t even in the film. There’s a room where you are face to face..to face…to face…with Michael Myers. This scene is enhanced by light effects and just absolutely messes with your mind. Creators have taken it one step further, and placed extra items in your path to add to sensory overload. We won’t say what they are, but added with the lights and Michael Myers, it’s been enough to stop grown men in their paths. 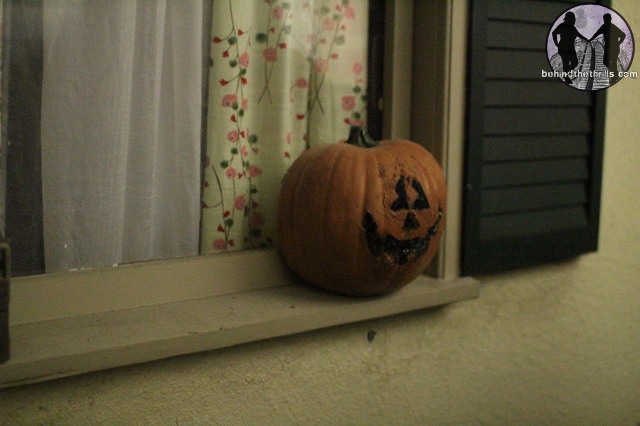 Another nod to the other films in the Halloween franchise comes in the form of something in the alley way from Halloween 3:Season of the Witch. Fun fact:Halloween was originally envisioned as an anthology series, much like American Horror Story is today. The film would take a different story for each film, and be released every year in time for Halloween. However, the filmmakers released Halloween and Halloween 2, which featured Michael Myers, and the third involving Silver Shamrock. The 3rd film was a huge disappointment, but later became a cult classic, with tons of people rediscovering the film years later. In the house, masked figures from Halloween 3 appear, and on the TV in the living room, the Silver Shamrock theme plays periodically. The Thing from Another World also plays, which would later be remade by director John Carpenter as The Thing, another Universal classic horror film and house. 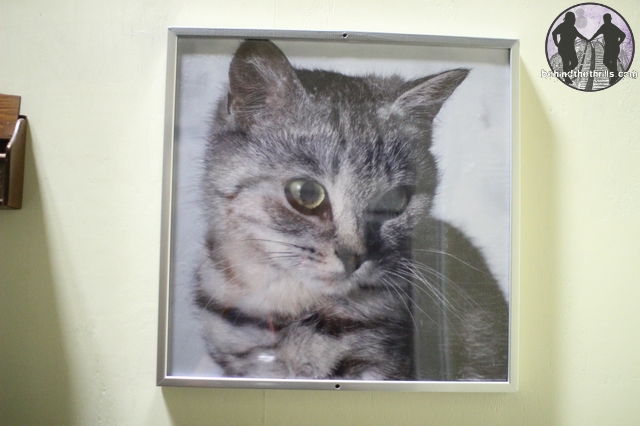 The picture of the cat was pointed out by someone on Twitter to the A&D team. They had to go back and find it in the film, then find it to hang in the house. The team was that committed to recreating the house. The shoestring budget of the film had the crew finding whatever they could to make the house look like it was the perfect suburban Illinois home. 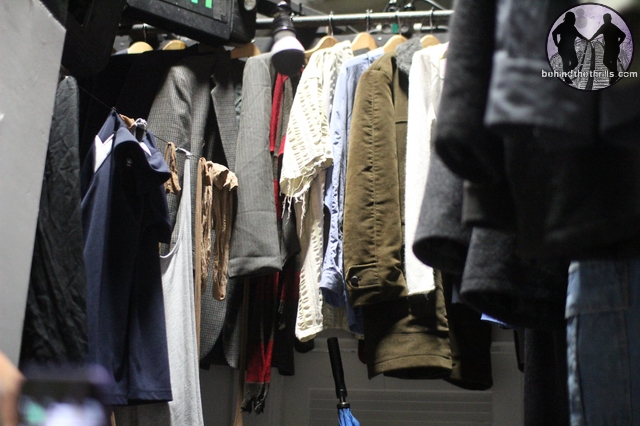 As we go through the house, we venture through the closet. Jamie Lee Curtis was required to purchase her own wardrobe for the film, which she did from JC Penney’s for about $100 dollars. The clothes in the HHN closet aren’t exactly from JC Penney, but if you look closely you’ll see some clothes from other horror icons hanging in the closet. Can you see them? Here’s a hint, they were both featured at Halloween Horror Nights in 2007, along with a third.

We see Freddy’s sweater, along with the shirt of Leatherface (Texas Chainsaw Massacre), and though it wasn’t officially stated, it looks like to the left of it is Jason’s jacket…albeit a little less tattered than we’re accustomed to seeing.

Video-Come face to face with Michael Myers with the lights off in Halloween!

Michael Myers is one of the most iconic faces in horror. Whether you like the films or not, the house at this year’s Halloween Horror Nights is downright one of the best at the event. It’s a testament to how much detail Universal Orlando puts into their events. From a personal standpoint, we’ve seen more people come out of Halloween visibly shaken than any other house. People find him just absolutely frightening, and the true face of horror. We’ve seen people break down in hysterics after walking through the house, needing medical attention because they were that scared. Horror is subjective.

Slideshow-See even more details from Halloween and get one good scare!