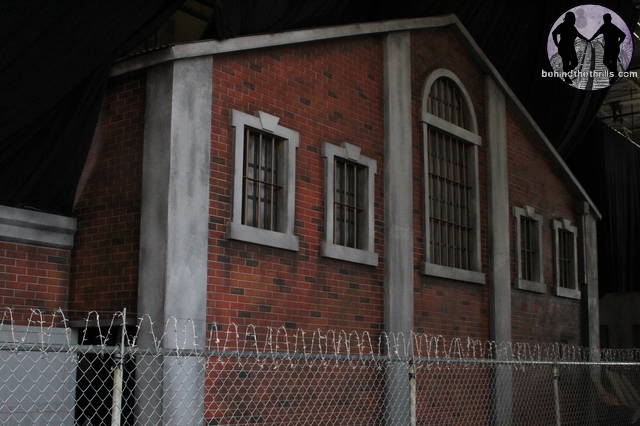 Unmasking the Horror #4-The Walking Dead

We take a walk through this house, with the lights on, to show some of the hidden things that you might miss. However, this WILL NOT contain any spoilers for Season Five. 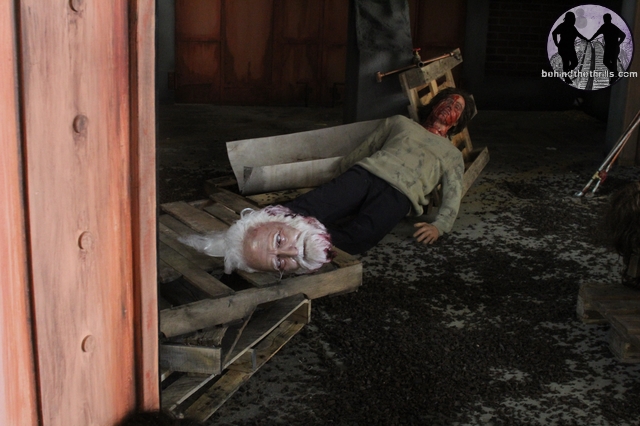 The Walking Dead:End of the Line, picks up right where Season 4 left off. Guests are walking right through the aftermath of the attack on the prison. As you walk up to the Prison, you can see a big smoldering hole, as well as the trail of corpses. We see a beheaded Herschel, as well as a Michonne’s sword. We also have a hole in the huge fence, as well. The fence is not the real chain link material that you might find on real fences. There’s also razor wire on top of the fence, which is also not real. The materials used are softer and can’t harm guests.

Once inside the house, the first thing we see are the pigs from the beginning of the season. They’ve been killed and you have a very unique smell. Smells are used all throughout the house as a way of not only immersing you in the story, but to also distract you from what is happening. 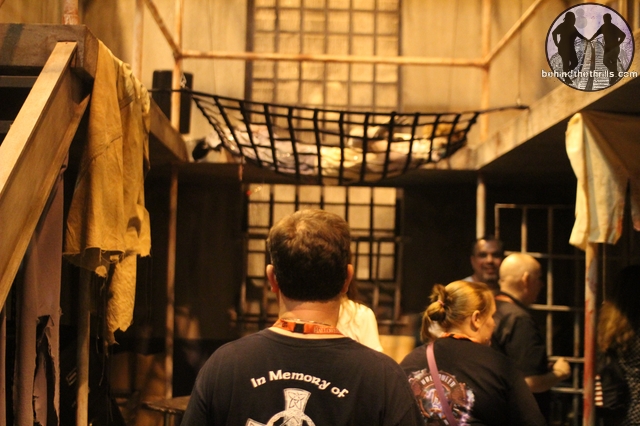 Right off the bat guests are thrown into the prison wing where the outbreak of disease happened. There are key props from the show used, such as the net and the different cells. Guests wind their ways through the prison, and into the shower area where we see the first victim of the illness. Many of the props in the house are reused from last year, and are only tweaked to show the change in the story. There are lists of names in the house, as well pieces of paper glued into the floor. The detail that the design team puts into the house is usually unnoticed, but it’s these little pieces that not only immerse you, but sometimes distract you. 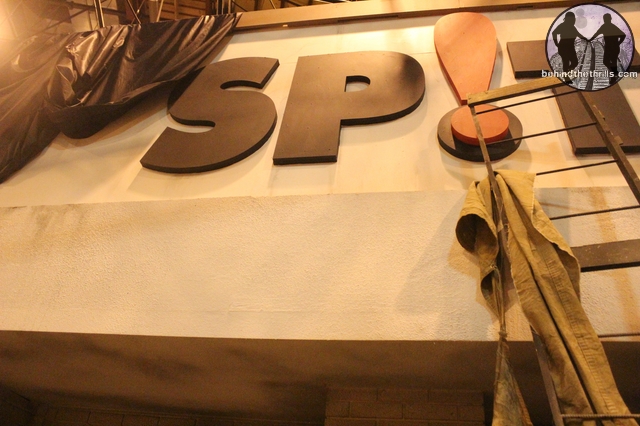 One big scene from season four is the Big Spot store. That store is ripped right from the show, and put into the house, complete with sign. In the scene, we see walkers fall through the ceiling, as well as a huge helicopter. The guests actually walk into the store and see rows of merchandise, all while getting attacked by walkers. 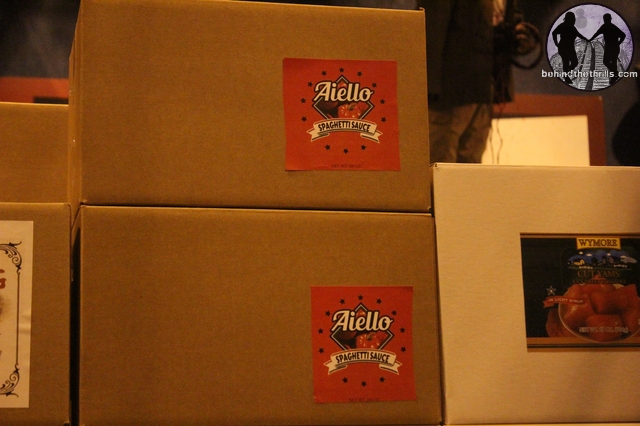 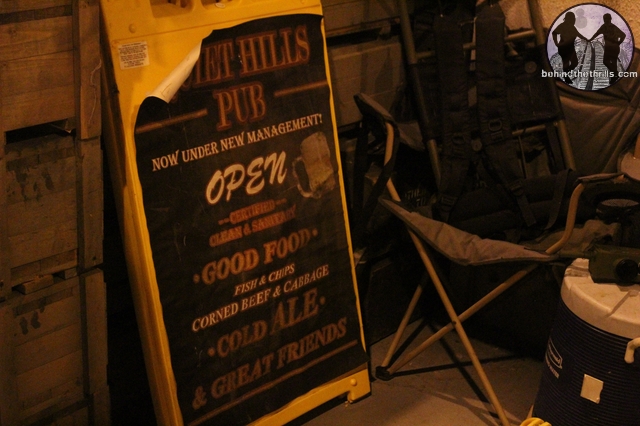 Little nods to the design team and past houses are scattered throughout the house, and this year the biggest nods happen in The Walking Dead. Instead of using real items, the design team creates items. Things like “Grommol” brand Peach Schnapps and Aiello Spaghetti Sauce are little nods to the creative team, like Kim Grommol and Mike Aiello. The Big Spot is slap full of these little tributes. There are also nods to previous houses, like the sign for the “Quiet Hills Pub”. That sign was used in The American Werewolf in London house in 2013, and itself is a nod to Silent Hills from 2012. There are more nods to the past years of HHN that we’ll look at later in the house. 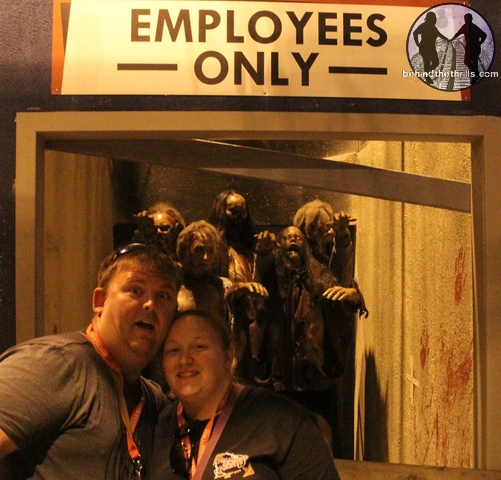 One great and relatively effective scare is the huge animatronic walker horde. It slides back and forth, but it does so at such a fast pace that it really catches guests off guard. It’s on a track system that resets itself every few seconds. 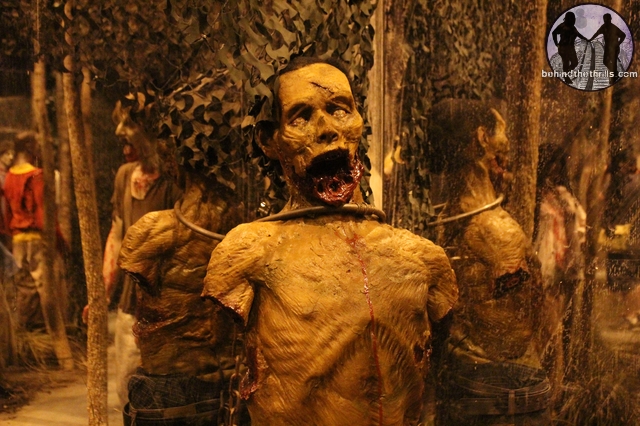 Walkers come in many forms in the house, from animatronics, to live actors and even static figures. This figure is obviously one of Michonne’s pets. It’s used in a scene involving mirrors that is quite amazing. There are several trees (yes they use real trees) in the room, with mirrors behind them. The room is filled with fog, and live actors which move in and out of the trees. The effect makes your brain think that there are more walkers in the room than there actually is, and the actors use that to their advantage to scare the hell out of you, in between the flashes of light. 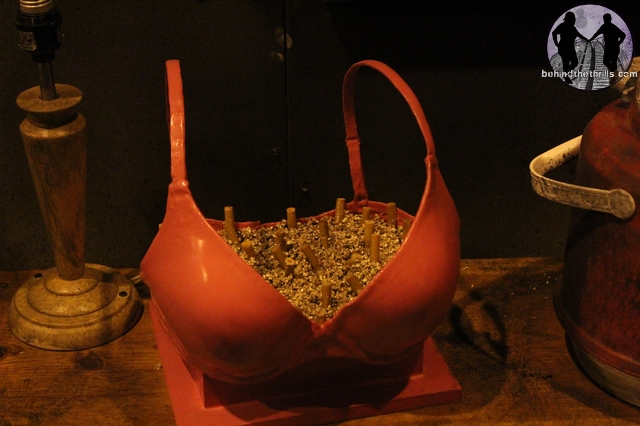 One prop that was too good not to feature was the bra ashtray. Crews had to actually make it, after not being able to find it to purchase. It’s one small detail that fans will get, if they’re looking for it. The bra makes it an over the shoulder, smoulder holder. 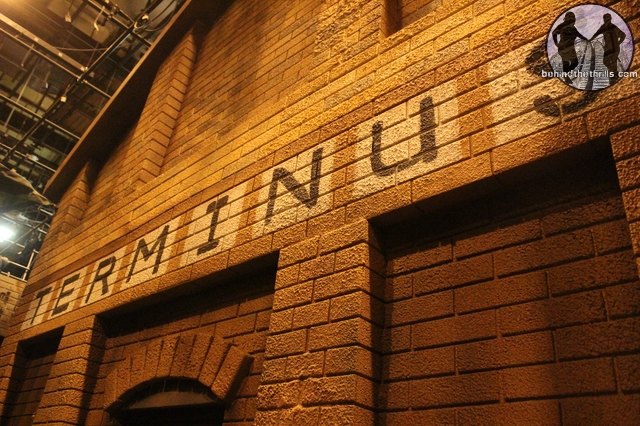 Just like the show, we end up in Terminus. Things look great on the surface, but they really aren’t what they seem. Are they cannibals, are they just survivors? If you’ve seen the first episode of season five, you’ll have a better idea of exactly what they are, though it’s not expressly said. Terminus is recreated perfectly in the house, with many of the walls towering above you, and providing distraction scares. 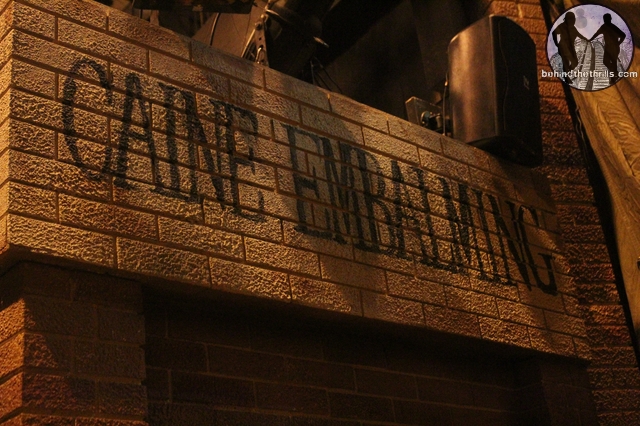 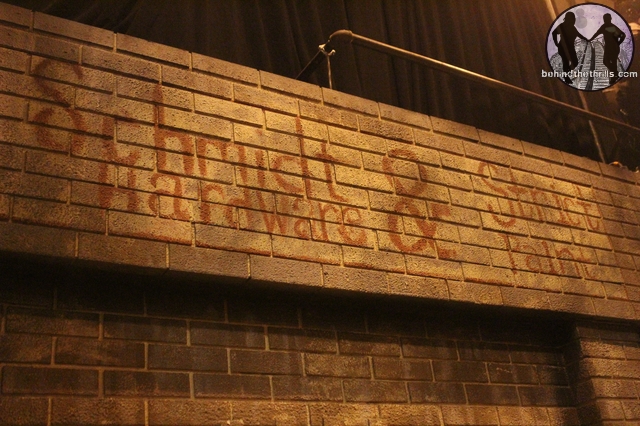 Four of the main icons from HHN are featured in Terminus, as shop names. We have Caine Embalming, an obvious nod to the Caretaker, Schmidt Hardware, Strict Paint and Ravinksi Film. Jack, The Storyteller, and The Director, all represented in a town they just might call home. There are other nods to several other houses sprinkled throughout the event, and if you look hard enough (between the scares) you just might find some great old prop from an old house.
Slideshow:Check out even more from The Walking Dead at Universal’s Halloween Horror Nights