Christmas at Gaylord Palms brings The Nutcracker to life with ICE!

The Nutcracker is possibly one of the most celebrated traditions of Christmas in history. The classic tale, set to the timeless music of Tchaikovsky, has become a celebrated part of the holiday season. This year Gaylord Palms in Kissimmee is making The Nutcracker part of their annual tradition, by bringing the classic story to life in almost 2 million pounds of frozen splendor with ICE! ICE! at Gaylord Palms is just one of the many things happening this year during Christmas at Gaylord Palms. 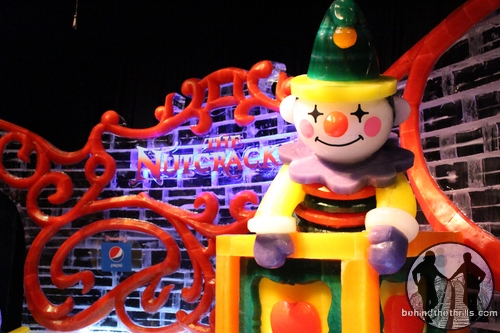 Every year, ICE! at Gaylord Palms brings an all new theme to life with almost two million pounds of sculpted, colored ice. This year is no exception, as ICE! presents The Nutcracker. Ice sculptors from Harbin China spend months carving sculptures into scenes from the classic tale. This year feature more intricately carved figures and designs than ever before. From the simple designs on the walls to the curves of the collars on the character, no design has been overlooked. 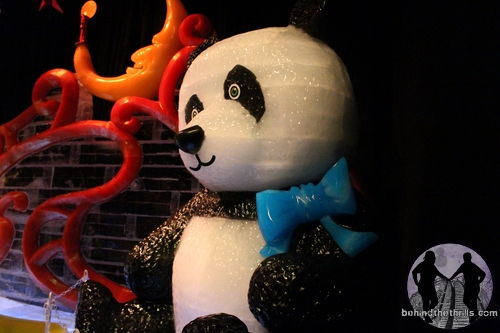 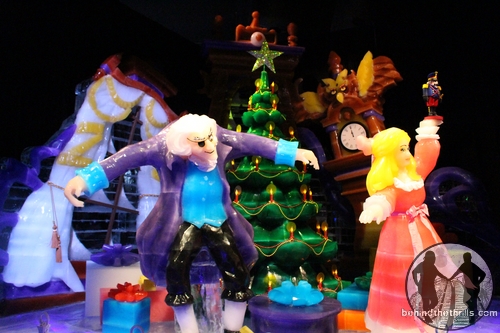 Every iconic scene is here from the story, from Grandfather and all the toys to the toy soldiers. Each scene in The Nutcracker is replicated using colored water, and very intricate carving techniques. To keep the sculptures in pristine condition, and to add to the feeling of Christmas, the exhibition area is chilled to a balmy nine degrees. That’s a very stark contrast to Orlando’s normal 65-70 degrees this time of year. 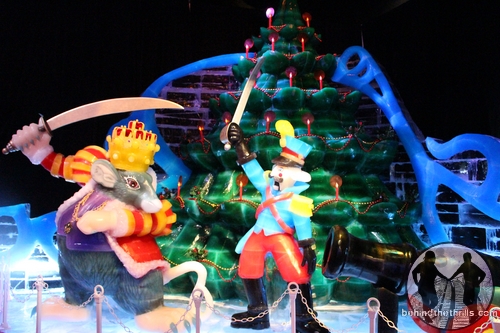 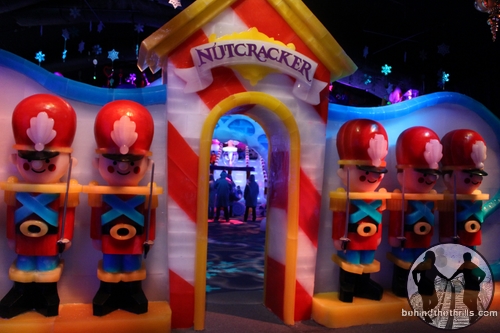 Gaylord, however, isn’t satisfied with just giving you ice sculptures. They take the music from the classic story and entwine it with the sculptures. Also, many of the sculptures move. Instead of just statues, there are a variety of elements that make ICE extremely unique. Tunnels, and different pieces add to the fun of the presentation. 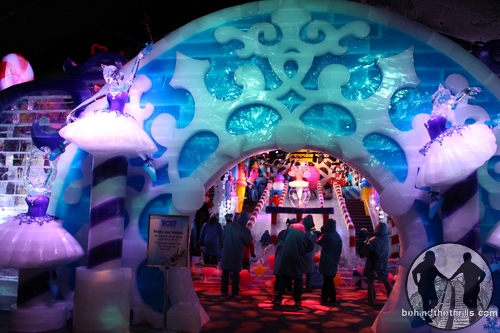 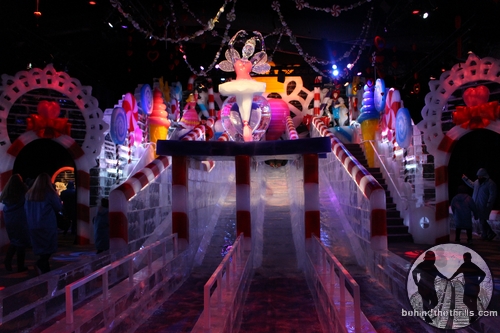 Our favorite way to interact with ICE is the super fun ice slides. Each slide is really made of ice, and is a blast. Of course there’s a trick to getting the best speed, and actually getting down the slide. It’s all in the parka!

Video-Get frozen on the Ice Slides at Gaylord Palms 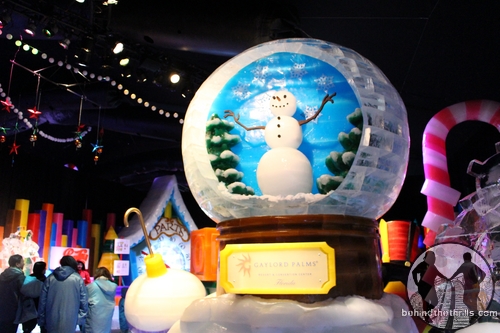 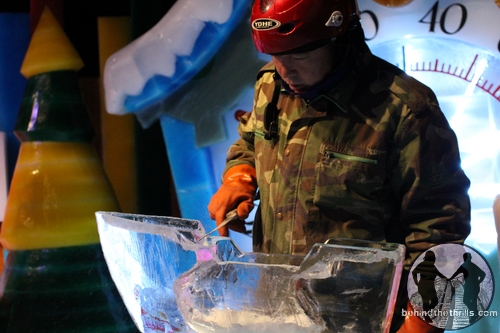 The Frostbite Factory gives guests a look at not only some fun facts about the event, and the process of creating all of the figures, but it also gives you a glimpse of the artists in action. One of the sculptors who created the display is hard at work on yet another piece. He, and others, will work on the figure throughout the event, and will allow you to see it pieced together. 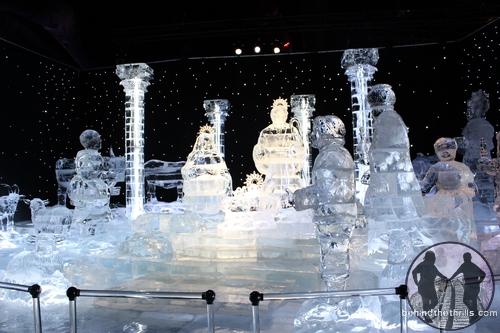 A yearly tradition of ICE! is the Nativity in pure, non-colored ice. The simple sculptures have no frills, and are pure as pure and simple as the true meaning of Christmas itself. While the rest of ice is dazzling and vibrant, this is very solemn and gives guests a place to reflect. It’s absolutely gorgeous. 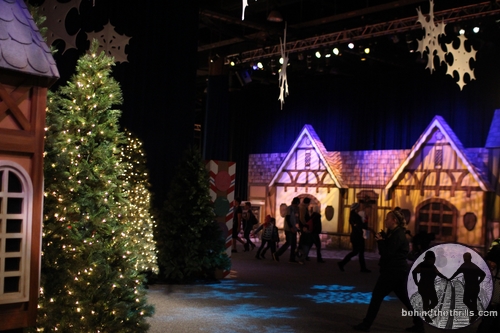 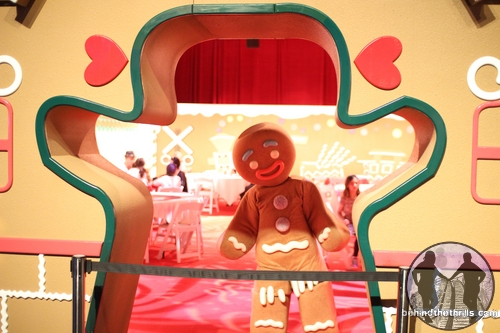 Once you’re done with ICE! the fun doesn’t have to stop. There are several other opportunities for fun in the Alpine Village, located at the exit of ICE! The village features cookie decorating with Gingy from Shrek as well as snacks, and GiGi’s Cupcakes. Guests can also warm up with very rich hot chocolate. 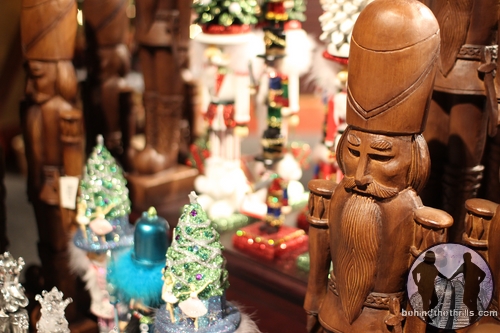 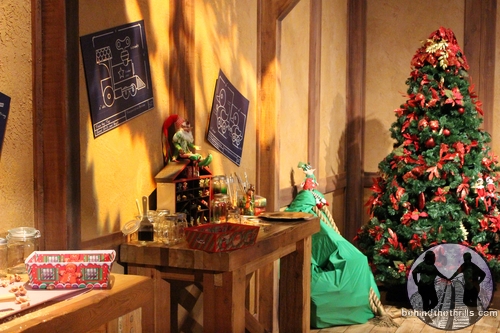 For those looking for a gift, there are tons of Nutcrackers as well as other Christmas ornaments, toys and ICE! souvenirs. Santa’s Workshop is a great place that fits with the whole Alpine Village theme of the surrounding area. The big guy himself is even there, hard at work on toys. Of course he has time to stop and take a picture with you in his shop. 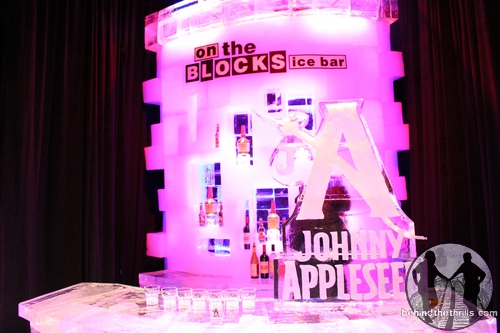 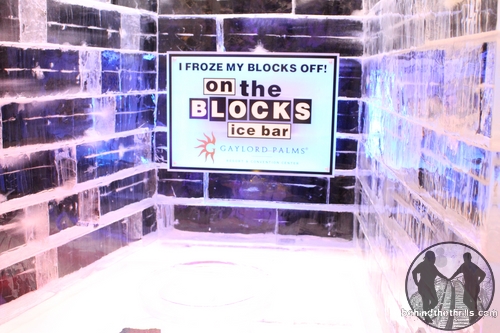 For something with more of an adult flair, there’s On The Blocks Ice Bar, located inside ICE! itself. The bar is an extra charge, and runs roughly about $15 dollars. You get exclusive access to an ice bar, a sampling of Johnny Appleseed hard cider, and a drink in a souvenir blinky cup. We were in and out in less than ten minutes. You can not purchase other drinks in the bar, however there is a bar outside of ICE! that serves Johnny Appleseed and other signature cocktails.

Video-Go through ICE! with the sounds of The Nutcracker!

Christmas at Gaylord doesn’t end with ICE! either, it extends into a huge snow tubing area that opens Friday the 21st to guests. You climb up a huge snow hill, armed with a tube and go jetting down the ramp. It’s a ton of fun for those who love the snow, and just don’t like the mess. For those who have never had fun in the snow, it’s a great place to start.

Gaylord also does Christmas bigger than any other hotel in the area, and even bigger than some theme parks. Nightly they light the massive Christmas tree in the middle of their giant atrium. There is also an amazing nightly show that begins November 21st as well. Luminescence mixes a live band, singers, acrobatics and a huge light show. While Luminescence is included with ICE! admission, it’s also available to all guests at the hotel.

Slideshow-Check out even more from ICE! at Gaylord Palms!

Guests at Gaylord Palms during Christmas can take part in several other amazing activities, including character breakfasts with Shrek and other Dreamworks characters. There’s also milk and cookies with Mrs. Claus and tons of fun in the huge hotel.

Stay tuned for even more from Gaylord Palms, and be sure to get social with us on Facebook and follow along with us on Twitter @BehindThrills for the latest updates!

For more information about ICE! at Gaylord Palms, including reservations and tickets, visit the official Gaylord Palms website by clicking here! 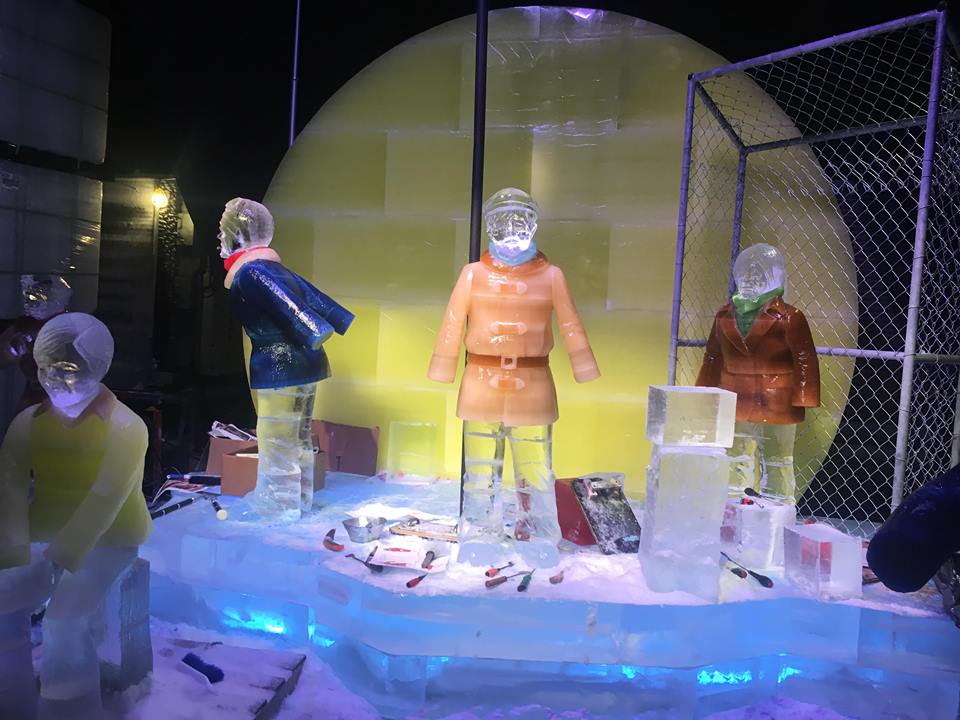