Days of the Living Dead: A Behind-the-Screams Look at the Haunt Industry

Have you ever wondered what it takes to put together a professional haunted house? Zombie Army Productions knows, and while they have been featured in documentaries, television pitch videos, and web series programs since 2001, “the haunted house industry is an exciting and unique world that most people [just] don’t know very much about,” owner and designer John LaFlamboy told us. “We felt that we had a fun way to expose the viewing audience to the creative artists in the haunt industry.” Since 2008, Zombie Army Productions, their events, and their attractions have been the stars of Days of The Living Dead, a reality web series that primarily chronicles each season of Statesville Haunted Prison, from initial design all the way through closing night. 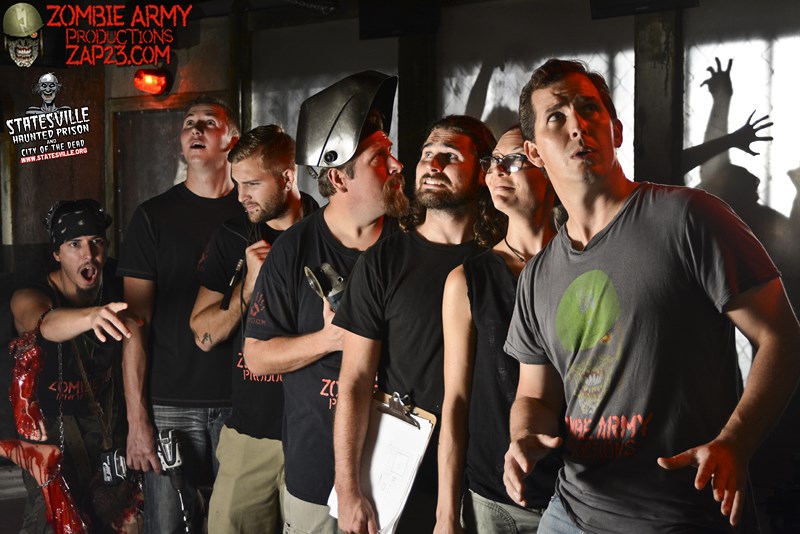 Statesville Haunted Prison is consistently voted one of the top haunted attractions in the Chicago area (read our review by clicking here), and Days of the Living Dead offers a full access look behind the scenes. The show documents the adventures of John and his crew as they visit trade shows, struggle against the clock to meet construction deadlines, go through actor auditions and training, and deal with surprise challenges that arise during their journey to deliver a top notch haunt every October.

The seasons are engrossing, showcasing both the highs and lows of creating a professional haunted attraction. The cast is honest, genuine, and uncensored, resulting in a captivating watch that finds the viewer pulling for them through the tough times and cheering with them at the successes. And it’s proven to resonate with visitors of the attraction. “I admit, I was concerned that this might spoil [the audience’s] haunt experience,” John told us, “but we have found that the customers not only enjoy learning about what we did to create the haunt, but they now consider it an essential part of their Haunted House Experience. You can hear them talking about episodes while they are waiting in line at the attraction, or calling us over to ask us about something they saw on the show.”

However, due to the fact that the web series is almost entirely dependent on sponsorships, there have been continual funding issues. After unsuccessful attempts to find consistent sponsorship, original production company Joone Studios was forced to move on. After a year and a half hiatus, Mike Myer and Chris Sato of Yokai Films stepped in and breathed new life into the project. This new partnership has seen the production values of the show increase to an all-new level, but the ever-present funding problems are still a major hindrance to the series’ continued survival. As a result, Zombie Army Productions has utilized crowdfunding and put the fate of the show in the viewers’ hands. The Kickstarter has 10 days to go, and a majority of the funds are still desperately needed to keep the show alive.

If the show does continue, what can we expect to see in Season 6? “We will be preparing Statesville Haunted Prison for the national audience of the Legendary Haunt Tour that will visit us in November 2015, our crew will be resurrecting our sunken haunt “Zombie Containment”  and rebuilding it for next year, we’ll be visiting haunted house conventions around the country, rocking out at Zombie Prom Chicago, doing several “Do It Yourself” segments, travelling to Film Festival Tours with our new film The Adventures of Kitty Zombie, and there will be a few surprises for our audience along the way.”

Days of the Living Dead offers a unique peek behind the curtain to see how people from all different walks of life come together and become family, with the goal of putting on an amazing show and scaring the pants off of visitors. Although they run across their share of problems both on set and behind the scenes, the passion, dedication, and just pure love for what they do shines through the series. “We have really enjoyed bringing our audience backstage of the haunted house industry over the past few years,” concluded John. “It is a crazy world filled with so many talented and creative people. I would like to thank all of those who have supported our little web series; I hope its as much fun to watch as it is for us to do.”

With each episode only being between 5 and 10 minutes, it’s easy to watch the whole series in one afternoon. Please donate to the Kickstarter (click here) if you can to help keep this show on the air.

For more information on Days of the Living Dead, or to watch the first five seasons, visit their official website by clicking here!