It’s hard to write an article about Frozen without writing all the silly little puns. Sure, we want to build a snowman, yes…it’s the first time in forever. However, we’ll just have to Let it Go…sorry couldn’t resist. This year at Mickey’s Very Christmas Party, the whole gang is at Magic Kingdom for a special Christmas in the very Magical Kingdom. It’s the latest effort to bring the film to life in the parks, and guests are lining up for it, and so far selling out every Christmas Party that the park has thrown. So, what is it all like? We take a look at the Frozen fun at Walt Disney World. 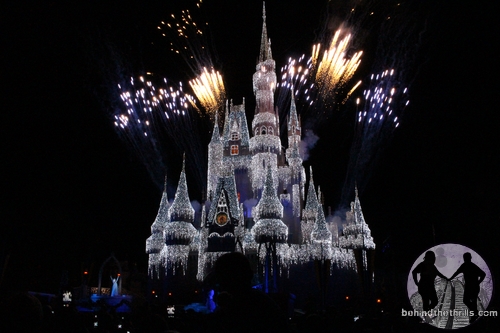 Frozen has taken over the Magic Kingdom for the holidays in a big way, with the characters taking over many of the popular shows and parades. The biggest is, of course, the nightly castle lighting. Anna, Elsa, Kristoff and Olaf have come to the magical kingdom as guests. The holidays are great, but they wish it had a little more ice and snow. Of course, Elsa has the power to make it happen, and she does in a big way. She transforms Cinderella Castle into an ice covered spectacle that glistens and shines.

Video-Get a glimpse at A Frozen Holiday Wish

The show features the first appearance of Olaf, as a walk around character. He is a tad tall, but plays a huge part in the show.
There are two shows nightly, and one as the park gets dark, and the other later in the evening. Both are super packed, but we recommend trying to stay for the later show, as day guests are cleared out of the park by then. 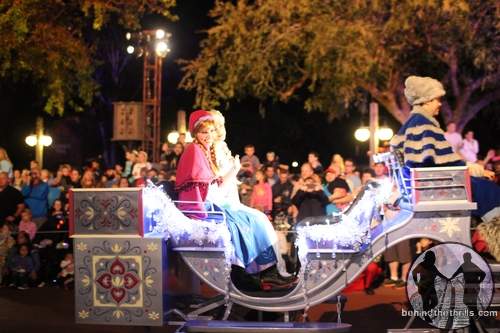 If you want to get a little closer to the gang from Frozen, you can also see them in Mickey’s Once Upon  a Christmas Parade. The segment features Anna and Elsa being pulled by horse in an ice covered carriage. There are three different floats in total for Frozen, and each one has a unique set of dancers. There’s skiers, flag twirlers and axemen. 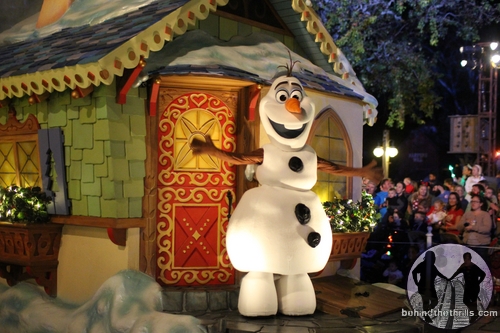 Olaf and Kristoff both get their own floats as well, and you get a great look at Olaf. Something about that design that we just love! He jiggles when he walks, kind of like in the movie.

Video-Get Frozen in the Once Upon a Christmas Parade!

If that wasn’t enough Frozen fun, Frozen has also taken over the popular Sorcerer’s of the Magic Kingdom cards. Elsa makes her debut on the card with a powerful spell, Elsa’s Icy Shield. 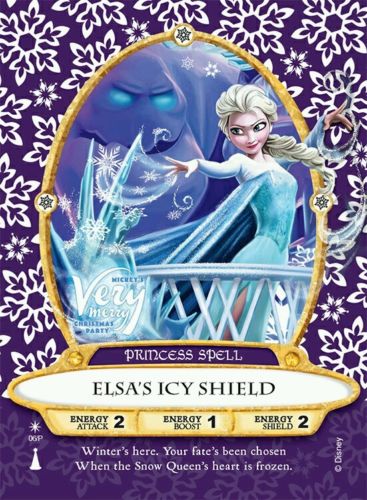 The Frozen fun at Magic Kingdom is in addition to the huge Frozen Sing Along and Wandering Oaken’s Trading Post at Disney’s Hollywood Studios.

Slideshow-Check out even more pictures of all the Frozen Fun at Walt Disney Disney World!

Mickey’s Very Merry Christmas Party happens on select nights in November and December, and is an extra ticketed event, meaning that it’s not included with daily theme park admission.