For haunt fans, there’s nothing worse than losing your haunts for another year. Unless of course you lose your haunts at the bottom of Lake Michigan. That’s exactly what happened to one of our favorite haunted attractions of the year when high winds caused the barge that held The Fear to partially sink. The house was one of the best in the Chicago area. However, if you’ve seen any zombie films, you’ll know that you just can’t keep a good zombie down. 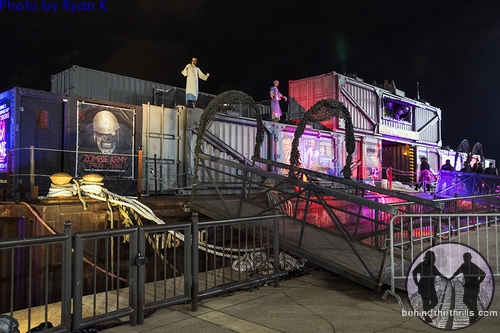 The Fear was one of only a handful of haunted houses actually built on a floating base. The huge barge housed the haunted attraction, and all of the props, sets and figures used in the house. On Halloween night, high winds caused huge waves on Lake Michigan, which caused the barge to take on water and partially sink.

The sinking caused thousands of dollars in damage, as well as the loss of many of the zombies. Thankfully, none of the actors playing zombies were injured, as the storm caused the production to shut down for the night. Still, many of the set pieces were completely destroyed and many of the zombie figure have not been recovered as of yet.

Still, this is a huge setback for the haunt, and heartbreaking for the fans of the attraction. The haunt was sponsored by Zombie Army Productions. Read the huge review, and see tons of pictures by clicking here!

Stay tuned for more on this story, and be sure to get social with us on Facebook, and follow along with us on Twitter @BehindThrills for the latest updates!