Universal Orlando is great about getting guest opinions about upcoming attractions. Some attractions are going to be a hit, not matter what, others…well, sometimes they just aren’t so sure. To get a better grasp of what the audience wants, the park occasionally sends out surveys to select individuals about upcoming attractions. They have previously done this earlier this year with Halloween Horror Nights 25 (click here). Now, it appears that the park is working on a new show, as new surveys went out to some select individuals. While we were not one of those individuals, we were sent some of the choices on the surveys by several people.

Universal is looking at new show concepts. Shows that could come and replace one their existing properties. Let’s take a look at the different concepts that we were sent, and see which one would fit best.

America’s Got Talent-This is a show produced by NBC, which is a division of Universal. The network and theme parks have been working closely together with several projects, most notably The Today Show. The premise of the show on Television is that a group of people audition and showcase their talent. It’s a fun show, but mostly ends up being a singing competition. The idea behind Universal’s show would be a group that celebrates that spirit. So, unlike American Idol Experience at Disney, they will not be pulling from the audience. Instead, it will be professional performers, doing a song list, or set of tricks. Most likely the audience will choose who “wins”. Fun concept, but without the randomness of the audience participants, it will be just another singing show.

Ghostbusters:Back in Town-This is an interesting concept that could very well work. Of course, we say that because we are huge fans of the franchise, and what the park has done with it before. Universal originally had a show with Ghostbusters that utilized some really amazing effects. This time around the boys would be in a musical, and fighting ghosts with effects. We imagine the centerpiece being the Stay Puft Marshmallow Man.

Matt Hoffmans’ Agro Circus-This show is not a new feature to Universal. In previous summers, the show would make an appearance at Universal’s Islands of Adventure. The show features high flying bikes, skateboards, and a trip around the cage of doom.

Sprout-This would be a show based on the popular kids network, and would feature some of the biggest characters, such as Barney, Chica the Chick and others. It would be about 25 minutes long, and would go for six daily shows. We assume that this would replace “A Day in the Park with Barney”, as that show is very dated. 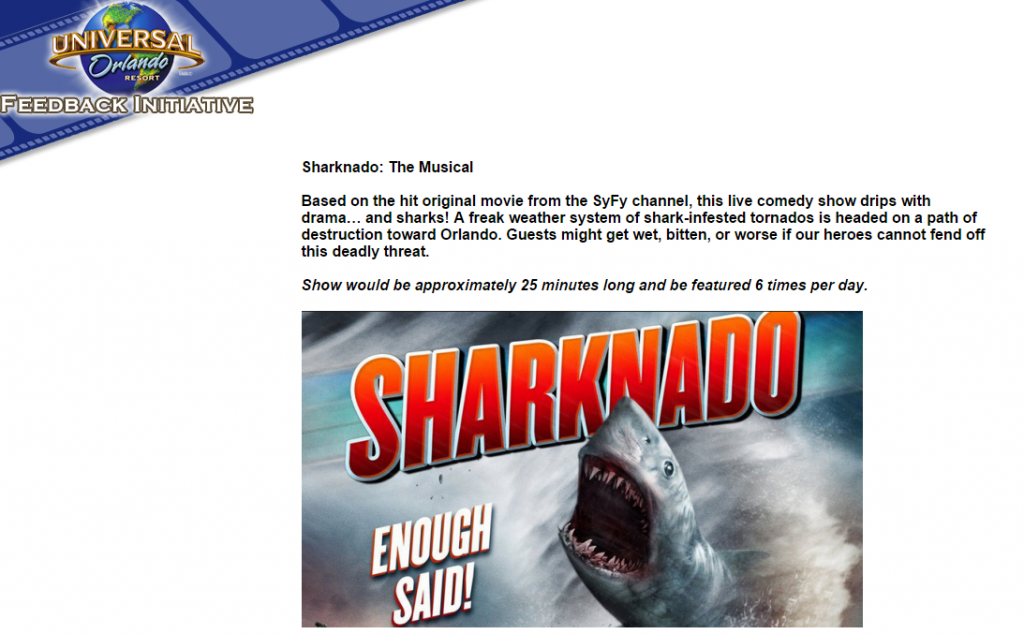 Sharknado:The Musical-We had to get a screen shot of this. There was no way in hell this could be real…but it don’t make no sense, but there it is! Sharknado-The Musical. Yeah, I can see it happening. A tornado full of sharks is making its’ way towards Orlando, and it’s up to the cast to save it. This would be an obvious replacement for Twister, and the effects would be just cheeseball, over the top.

So, which shows are actually being thought about? Many theme parks just throw ideas in the air, hoping to distract you from the real idea. Why? They don’t want you to know what they are really thinking about. With that said, everyone who sent us reports on this mentioned America’s Got Talent. That looks like it will be the next big show at Universal.

Twister is said to be on the chopping block, which could be the location for this new show. The inside would have to be absolutely gutted, and changed around, but it would be a quick fix.

Ghostbusters seems like a great choice, naturally, but it’s really too much of a good choice. Universal has history with the franchise, and there will be a “reboot” of the series very soon. It could be time to bring them back. There was also the little hint of having Ghostbusters at HHN 25, so it could be something serious that the park is working on.

Sharknado: The Musical seems just way too crazy to work, but it has a huge fanbase, two films (with a third on the way) and is just a ton of fun. Easily could be a great show.

Sprout is most likely happening, and would most likely replace Barney as the staple kids show. It’s a great idea, and still keeps the big purple guy in the park. No matter how annoying you may find him, kids still go nuts over the dinosaur, and it’s actually a great show that has been running for over 20 years.

So which show would you like to see hit Universal Orlando? Let us know in the comments below!

Keep in mind that this is just a survey to gauge opinion, and not a definite announcement of things to come. If one of these shows are going to happen, Universal will make an official announcement at a later date. For now, file this as rumors.