The Massacre Haunted House, located in Montgomery, IL is well known in the Chicago area for its intensity and high levels of fright. It’s consistently rated as one of the area’s top haunts, and even scored top spot in The Chicago Tribune’s haunt rankings this season; and it’s easy to see why. Massacre Haunted House has found that perfect balance between actors, sets, and animatronics to deliver a terrifying experience where your deepest fears have come to life and are waiting for you in the depths of your worst nightmares. 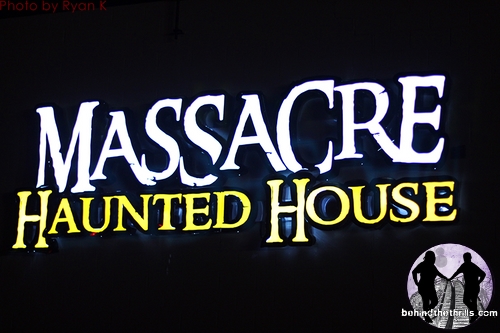 Now in it’s seventh season, Massacre Haunted House found its home earlier this year in a permanent, 22,000 sq ft location for the 2014 season. This haunt features two attractions, Massacre and Fear Factory 3-D, and owner Ryan Burke uses the space to its full advantage. From the moment visitors park their car, scare actors ooze out of the darkness to entertain and scare. Inside, horror films are projected onto the wall of the queue area, and more actors mingle in the lines. And with wait times that approach two to three hours on busy nights, the amount of queue line entertainment really helps pass the time.

The sets are immersive, and you get the sense that you’ve stepped into a different, more twisted version of reality. Things feel gritty, used, and weathered; Massacre has even brought in real cars and a Cessna plane to fully flesh out the environments that visitors traverse. The houses use an impressive array of technologies, from small props, to practical and special effects, to large scale puppets and animatronics. There are some truly astounding props that are as scary as they are breathtaking, including a giant Tyrannosaurus Rex and a rather hungry carnivorous plant. But even the small details are there, like feeling blasts of air when guns are fired, or forgotten light fixtures that flicker and threaten to fall as you pass underneath. And the use of special effects in set pieces like lights and doors not only add another layer to the immersive sets, but also helps ratchet up the terror, as scares quite literally come from every direction. 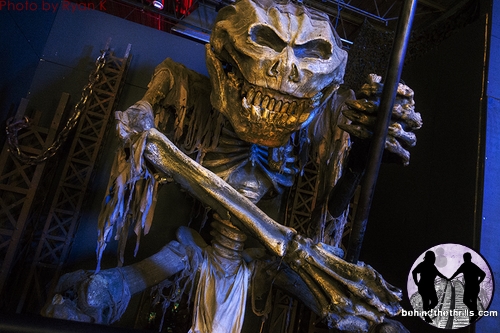 Massacre employs a variety of scare styles, and their use of innovative technology even extends to boo holes and scare actor placement. Actors hide in plain sight, sometimes within the environments or in the props themselves. While you will find some classic boo holes in the houses, there are far more insidious ones hidden along the way, guaranteed to startle even the most grizzled of haunt visitors. There are over 100 actors on an average night, and with many of them experienced veterans in the industry, visitors can expect more than just loud yelling or snarls as they encounter the inhabitants of Massacre Haunted House. Interaction levels are high, and the actors know their characters well. The houses are laid out in such a way that you get multiple interaction points with some of the actors. One particular highlight was a street walker in a decaying urban sprawl that used the multiple contact points to full effect, engaging us in a longer discourse and being equal parts hilarious and incredibly disturbing at the same time. 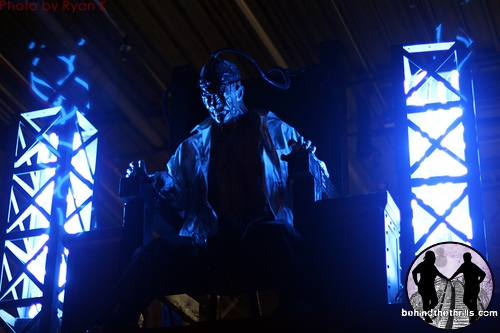 There were a few issues in the house during our walkthrough, such as some light pollution in spots, and a few places that felt a bit rough or unfinished. Additionally, the Massacre house itself felt a little random in places rather than utilizing a larger, more cohesive theme to tie everything together. But with only three months to build everything up from nothing in a new space, what was accomplished was astounding.  And when not in operation, the houses are continually being worked on to add polish and fix the known issues. If what was there is any indication of what’s still to come, Massacre Haunted House will remain a must-see attraction to visit next season.

Slideshow-Check out even more pictures from Massacre Haunted House

Massacre Haunted House runs through Sunday, November 2. Tickets are $23 for both Massacre and Fear Factory 3-D, or $45 for VIP. Discounts are available on-line. The event is not recommended for children or those who are easily offended. This last part is especially true, as there is more adult-oriented humor throughout the attraction.

For more information about Massacre Haunted House, or to buy tickets, visit the official website by clicking here!