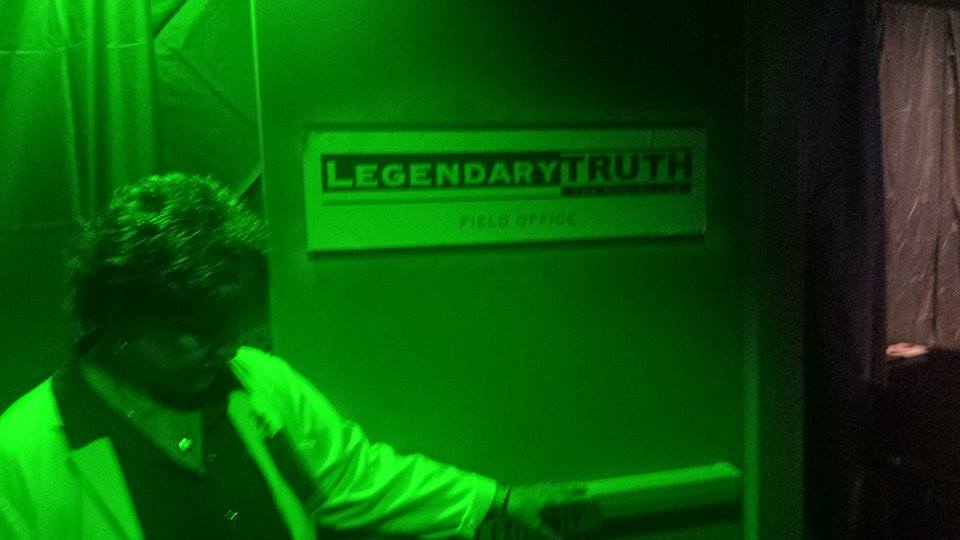 Guests are armed with their cellphones, and a special app they can download for free. As soon as they enter the park, guests are playing the game via Bluetooth, and are on their way to solving mysteries. Players must go through scare zones, houses and even interact with certain characters to gain points. Some interactions will give you points, while some evil characters will take them away.

It’s all part of a unique new system that Universal has developed to take guests farther into the stories they create.

2005 a small game was hidden within the Halloween Horror Nights website,  and only the sharpest of eyes picked up on it. It lead to a special meet up with the designers on Halloween.  In 2008, Universal Orlando’s Art & Design team came up with Legendary Truth to not only get the fans more involved,  but to also tell the story behind that year’s icon, Bloody Mary. After a short break in 2009, the team was back briefly for 2010 as they introduced the first actual haunted house at Halloween Horror Nights. In 2012 the game came back with online challenges, and in park play. In 2013 the games and challenges became more interactive than ever with RFID technology. Now the team is going to mobile devices to take the next level of interactive storytelling and the actual story of the event to new levels.

Legendary Truth was dismissed at the early part of Halloween Horror Nights, however, during the last four nights the event Legendary Truth returned with an all new mobile app. The app uses Bluetooth technology to complete tasks, and find the goal, which is the “Master Seal”. Those that achieved that goal were taken to the next step, solving a mystery. Players were taken into a room, given a tablet and given the task of solving the mystery. Ghosts came to life via the tables, interacted with guests,  and would help in the mystery. At the end, there was the fun of solving a mystery and getting the bragging rights.

While Legendary Truth was a fun nod for fans, it actually served for something much higher, both at Halloween Horror Nights and Universal in general. The tech used was low end RFID that you would find with phones. Think Apple Pay, or Google Wallet technology, as well as Augmented Reality. This type of technology would definitely be useful and come into play in the parks in the future in terms of ticketing and payment. Instead of developing all new tech like “Magic Bands” at Disney, which is expensive, they’re piggybacking on existing technology in your cell phone, or other device. Much like at Disney, paper tickets at Universal could soon be a thing of the past. In the next five or so years, things like Apple Pay and Google Wallet will become more prevalent. The devices used, along with the application used could not only make attractions come to life in a big way at Universal, but also make it effortless to pay, much like MagicBands at Disney are supposed to.

And let’s talk a bit more about the technology in theme park attractions. The Legendary Truth Experience used it to bring things to life. This year at the Wizarding World of Harry Potter, wands were equipped with RFID sensors to bring certain aspects of the park to life. In two years or less, the park could enhance that technology to bring aspects of rides to life, or even equip it on rides (similar to how parks use blasters on shooter rides now) to allow guests to fully interact with attractions.

Rumored future attractions include more Harry Potter, only now guests will be able to actually duel with dark wizards as they ride, which could very well affect how the attraction performs.

Let’s also not forget where the technology comes from. It was used very effectively for a “test” during Legendary Truth. Universal has been toying with the idea of a VIP upcharge experience for many years. Could this be the key to that new experience? Could we see a house so extreme that it uses not only live actors, but also technology to scare the hell out of guests?

While it would be great to see the tech used in all HHN houses, it presents very interesting problems. First, cell phones are a huge no-no in the houses. While the Legendary Truth experience relied on having your phone out, team members were always threatening to remove you if you didn’t put it away. Second, the crowd levels simply wouldn’t allow it. Could you imagine over 2000 people (estimated) an hour trying to figure out a mystery with their cell phones? It simply would not work. A VIP upcharge experience would be the only way for it to work. It’s something that isn’t a matter of if, but more when.

Be on the look out for new things all over Universal Orlando, technology is making huge leaps and theme parks are starting to take notice. Before long, we will be interacting with theme parks in ways that we never thought possible.