Gwazi is the poor child of Busch Gardens Tampa that didn’t age too well. The coaster was opened to rave reviews in 1999 as one of the fastest and largest wooden dual coasters in the country. Soon the new of the coaster wore off, and it became known for very rough rides. So what will become of it? Screamscape has learned the fate of the coaster and if you are a fan, you may want to get one last ride in. 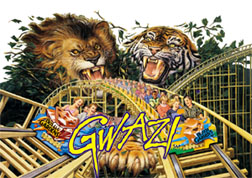 Busch Gardens Tampa tells Screamscape that Gwazi will close in 2015. The ride will close permanently in 2015, most likely at the end of February,  though a final date will be announced after the start of the year.
The coaster was unique in the fact that it would give the impression that you would hit the other train at several points in the ride…or at least that was the idea. The coaster, which consisted of two tracks (Lion and Tiger) would have several points in the ride where the coaster cars would pass close to each other.
The coaster wasn’t without it’s problems. The cost of maintaining a wooden coaster in Florida was one reason the coaster gave such rough rides. In 2006 a 52 year old man collapsed and died shortly after riding the coaster. In 2012 the coaster was retracked and fitted with Millennium Flyer trains, which gave a somewhat smoother ride. The Tiger side was later closed permanently.
No word if there will be a replacement coaster, but the removal of the two wooden coasters brings the Busch Gardens coaster count down to seven (including Air Grover). Rumors, at one point, said there would be a redo of the track with Rocky Mountain Coasters, which would convert it into a hybrid coaster. Other rumors pointed to a shuttle coaster going in the area behind Tuts Tomb in the Egypt section of the park.

TAGBusch Gardens Tampa Gwazi
Previous PostPhoto: Santa places a star on top of The Orlando Eye Next PostClyde and Seamore go back to school in 2015 at SeaWorld San Antonio in all new show