The pumpkins on your neighbors’ lawns may have been replaced with plastic candy canes, and snowflakes have supplanted the leaves blowing in the wind, but it doesn’t mean the Halloween season is over. In fact, many haunted attractions across the nation have opened their doors to put some horror into the holiday season, and this month we’re looking at two such haunts in the Chicago area. In this second part, we take a peek at the sinister sugar plum fairies and demented elves lurking about the grisly corridors of Massacre Haunted House’s Christmas Nightmare. This attraction has struck a perfect balance between heart warming and bone chilling, and will leave you grinning between screams. 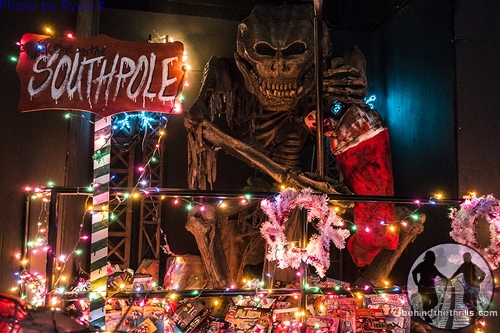 Now located in Montgomery, IL, Massacre Haunted House found a new permanent home this past season (read our review here). Owner Ryan Burke says that being in a permanent structure “gives us the opportunity to open up for special events in the off season for customers that couldn’t make it during October, as well as customers that just love horror and want something fun to do.” For Christmas, both attractions at Massacre Haunted House (Massacre and Fear Factory 3-D) have been given the festive treatment. The monsters and psychopaths are home for Christmas, and they’re decorating their trees with whatever they can get in their clutches, including you. Christmas lights are wrapped around corpses, gingerbread men are nailed to the walls, wreaths are hung in the asylum, and shards of ornaments and candy canes have been jammed into victims’ faces. “I have an amazing team of creative designers that all came up with great ideas. Everyone really brainstormed on this one,” said Burke, adding “we would be at the store and see something Christmas related, and say ‘that would look cool with blood.’” The new touches really add to the existing environments, creating a great juxtaposition of sweet and scary, holly and horrifying. Complementing the the visuals, Christmas songs have been twisted and stretched into carols that only lunatics could love, and are played throughout the attraction. The culmination is a walkthrough that is equal parts fondness and dread, and you’ll find yourself humming along to familiar songs as you run for your life. 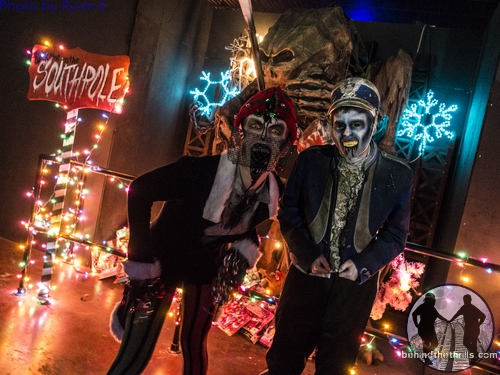 The environments aren’t the only thing to get a holiday makeover in Christmas Nightmare. Familiar faces have been contorted in monstrous visages, and instead of the normal motley crew of sociopaths and ghouls, visitors now come face to teeth with twisted versions of classic holiday characters, including snowmen, elves, toy soldiers, and even psychotic old Santa Claus himself. There are over 100 scare actors residing in the 22,000 sq ft house and queue area, including a lot of guest actors from other area haunts that jumped at the opportunity to get some off-season scaring in. The actors are passionate, and it comes through in their performance. Everyone is high energy, improvise their roles perfectly, and let both horror and humor shine where appropriate. 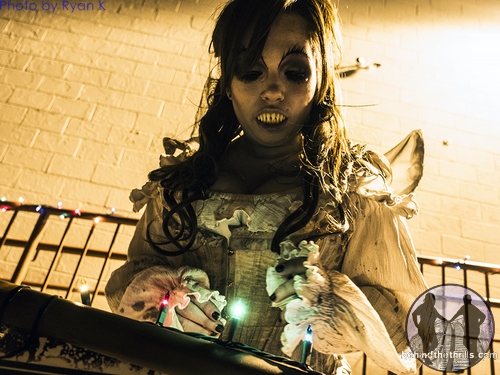 Massacre Haunted House’s Christmas Nightmare is an exceptional experience. If you’re feeling a little blue this Christmas, this is the perfect cure. From the moment you step out of your vehicle, you’re transported to a winter wonderland of nightmares, where the halls have been decked with blood and stockings have been hung by the chimney with care, some still with feet inside.

Christmas Nightmare’s final night is tonight, Saturday, December 20, from 7PM – 11PM. General admission tickets are $25 at the door, or get $5 off by bringing an unwrapped new toy that will go to the families of Montgomery in need who cannot afford toys this holiday season. This event is on the extreme side, and is not recommended for those who are are easily offended or scared.

Stay tuned for more gory goodness, and be sure to get social with us on Facebook and follow along with us on Twitter @BehindThrills for the latest updates! And if you haven’t already, go back and read our first part on Lombard Commonwealth’s The Frightmare Before Xmas.