The Cursed have moved out of Busch Gardens Tampa, but that doesn’t mean the terror isn’t lingering. Howl O Scream had a huge year with Cursed, and two new houses, but just because Christmas is upon us, doesn’t mean that the mayhem is over. Planning for 2015 has already started, and dates for the event has been released. We’ll take a look at this past year, and speculate what we might see for the coming year of fear. 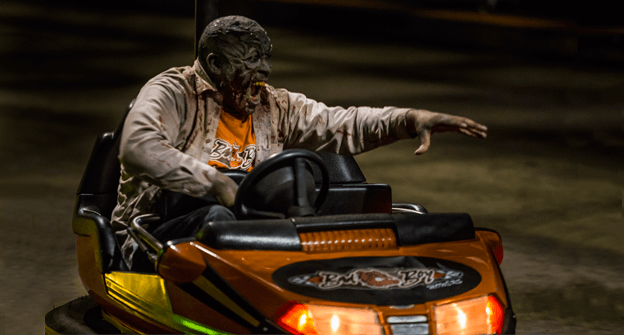 Zombies rode in bumper cars, and the Cursed were all over the park. Busch Gardens Tampa’s Howl O Scream 2014 got rave reviews, and broke new ground with their new houses, Dead Fall and ZCU. While Dead Fall was a bit of a traditional haunted house, with tons of new elements for the park, ZCU took the zombie experience to an all new level by putting a gun in the hands of guests, and letting them blast the dead away.

Okay, so maybe they just played laser tag, but it was a great new jump in the way that theme parks do haunted houses. The game itself needed a little work, but the idea of going into a house and keeping zombies at bay is a great one. The house is definitely a huge step towards more interactivity in theme park haunts.

The other house, Dead Fall, was a great throwback to classic haunted houses, with a story of a haunted garden where the dead could never leave. The house incorporated more scenery and interactive elements, like huge puppets than had ever been done at the park before.

The official site has launched the dates for 2015, with the opening night being at the end of September. The event will run select dates from September 25th until October 31st, 2015. This follows the announcement of Universal setting their Halloween Horror Nights 25 for the same dates.

While no specific dates have been announced yet, this follows what Howl O Scream did in 2014.

So what will we see in 2015? That depends on this whole “budget cut” thing that SeaWorld parks are currently going through. That is the key factor in what we will see happen to the event in 2015. The good news is that it’s happening, the bad news…could it be tamed down to bring in more families?

The rumor has been going around for many years-Busch Gardens Tampa will follow in the footsteps of Busch Gardens Williamsburg and make the event included with theme park admission. In addition, they will offer a family friendly Halloween Program during the day. Why does this rumor seem more possible this year? Christmas Town.

Christmas Town started as an upcharge event, but was included this year with admission. Granted, the two events are completely different, but again…we have no idea what is happening with the budget, and the goal of a theme park is to get people in the gates and spend more money. With guests not having to pay for tickets, they are more apt to spring for things like front of the line passes, tours and of course more merchandise. It’s a method that has worked wonders at Busch Gardens Williamsburg. The park adds several dining options, with shows.

So what about the houses and scare zones?

Zombies in the bumper cars were a brilliant idea. Other ideas could include zombies or monsters manning the gates of the coasters, coming to scare the hell out of people as they are strapped in.

Scare Zones could become a thing of the past, as audiences seem to love the roaming actors in the different parts of the park. It worked this year, and could come back bigger than before.

As for houses, again this is all dependent on budget. If the budget is the same, we could expect to see the same as we have in the past. Rotate two houses out, and bring in two new houses, possibly three.

We could see Zombie Mortuary and Blood Asylum leave, as well as Circus of Superstition. We could also expect to see “The Experiment” upcharge house leaving, since the area is rumored to be the spot for the next coaster in the park. However, we could also see a new upcharge house coming to the Gwazi area. The coaster is being closed permanently, and is a huge space taker. The station and maintenance bays could make for a some really great haunted house space.

Of course, this year also marks the departure of Creative Director Scott Swenson. He was instrumental in bringing the event to the way it is now. However, it’s also important to remember that there are several others still at the helm that make the event great.

Keep in mind, this is only speculation, and until it’s confirmed by the park, it’s not really happening. We should see some more information coming in around June or July, as the marketing begins to pick up and the house construction starts.