Madame Tussaud’s recently unveiled a new statue of Latin superstar Ricky Martin that will be housed at the new Madame Tussauds in Orlando which will open early next year.  Known for hits such as Livin’ La Vida Loca, She Bangs, and his latest single Adios, Martin  has sold more than 85 million albums worldwide and certified platinum more than 95 times in over 20 countries. He is also a New York Times bestselling author, philanthropist, and critically acclaimed Broadway star. 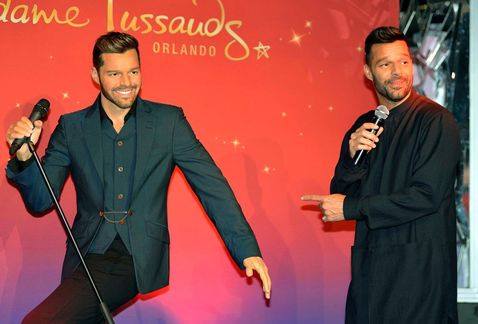 After personally choosing his statues clothing Martin was quoted as saying how  “ … incredible experience to take part in the Madame Tussauds process, I’m truly amazed at how much work has gone into making this figure  as authentic as possible.”  Madame Tussauds Studios  has had a lot of practice- they been making wax figures for over 150 years. Each masterpiece takes four months, and a team of 20 dedicated sculptor, to create.  Over 500 precise body measurements are referenced, real head hairs are inserted one by one, and countless layers of paints and tints are applied to build up skin tones – all to achieve astonishing realism.

Madame Tussauds Orlando will house brand new, immersive and interactive wax experience. Guests can move through themed areas meeting all of their favorite stars from actors, to historical and modern world leaders, sports stars, music legends as well as figures important to Florida. Visitors can shake  hands with the president, get on stage with rock stars and pop princesses, and get up close and personal with a Hollywood heartthrob to take the ultimate selfie!

Madame Tussauds Orlando will be part of the Idrive 360 complex, which includes the Orlando Eye, an aquarium, and many new restaurants to the international drive area.
Stay tuned for even more from Madame Tussauds, and be sure to get social with us on Facebook, and follow along with us on Twitter @BehindThrills for the latest updates!

For more information about Madam Tussauds at I-Drive 360, visit the official website by clicking here!