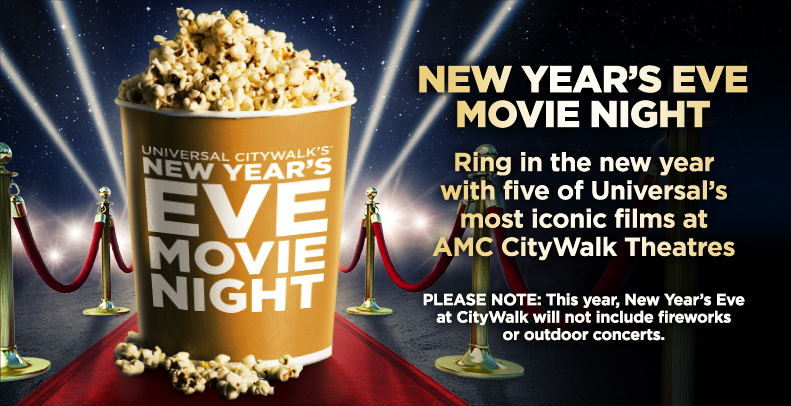 The movie night will feature classic Universal films such as “Jurassic Park”, “Back to the Future”, “Dracula”, “Frankenstein”, and “E.T. The Extra Terrestrial”. Guests will also be able to enjoy red carpet entry, a live DJ dance party, and special character appearances.

Admission to the New Year’s Eve Movie Night is $25 per adult and $15 per child. The admission ticket includes admission to a movie of the viewer’s choice, a complimentary soft drink, the DJ dance party, all you can eat popcorn, and a New Year’s goodie bag. The Movie Night will be taking place on the second level of CityWalk’s AMC theater.

In addition to the New Year’s Eve Movie Night, Universal CityWalk Hollywood has many other venues that are offering a great place to ring in the New Year, including Howl at the Moon, Infusion Lounge, Jillian’s Hi Life Lanes, Saddle Ranch Chop House, and Wolfgang Pup Bistro.

Due to ongoing construction at Universal Hollywood, Universal will not be offering a firework display this New Years Eve or outdoor performances.