On your average night in Orlando there are several live shows that visitors and residents can choose from. You can check out La Nouba at Downtown Disney, get splattered with paint at DRIP on Idrive, or check out a comedy show at the Orlando Improv. One of the best shows that is a “must see” when visiting Orlando is watching the Blue Man Group at Universal. Many, unfortunately look at the ticket prices for this family friendly show and pass it over. However, the bargain hunting coupon site Groupon allows those who have never experienced shows like Blue Man Group or those who wish to see those tall, silent Smurfs again possible. 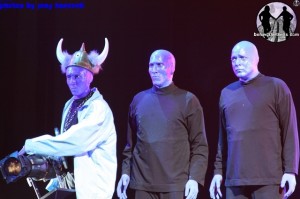 The Blue Man Group show at Universal Orlando has been a staple of CityWalk since opening in 2007. The show mixes high energy dance, pantomime, and even some very comedic musical routines. The show is a welcome mix of family fun, and subtle adult humor. It does have a little for everyone. If you haven’t seen the show since 2012, then you really haven’t seen the show. In 2012, the theater brought an all new show to life, mixing some of the old show, with tons of new bits and routines. It made the show less of a concert, and more of a rave.

Currently, mega-coupon site Groupon, has an amazing deal on tickets to the show. In fact, Groupon often has great deals on many Orlando based shows and attractions. Anything from Blue Man Group, to Cirque Du Soleil’s La Nouba, to even Characters in Flight can be found on Groupon at hugely discounted prices. The one thing to remember, there’s usually some catch to the deal. Sometimes deals can only be used during the week, or at a certain time. For example, the Blue Man Group tickets are good on select dates from now until February 20th.

Other great current deals include, half off of mini-golf, huge discounts to Pirates Dinner Theater, and more. Past deals have included unlimited rides at Fun Spot America in Orlando, and even huge discounts on SeaWorld Orlando.

Here are five more Groupon Deals that are too good to miss!

Check out even more deals by browsing the Groupon Orlando area, and be sure to also check out deals in your local area as well!

Similarly, there are tons of great deals on the other mega social coupon site, Living Social. Like Groupon, Living Social offers huge discounts for a limited time.