Harry Potter fans all over the world have a huge reason to rejoice, A Celebration of Harry Potter at Universal Orlando is almost here! Universal has released the full schedule of events and activities that’s happening for the whole weekend (click here), but there is just so much to take in that it’s tough to know where to start. So, to help you get the most out of your weekend, here’s seven things you need to know about  A Celebration of Harry Potter. Whether you’re a casual watcher of the films, you just enjoy the theme parks, or if you’ve been sorted into your house, there’s a little something for everyone this year, as well as some big changes. 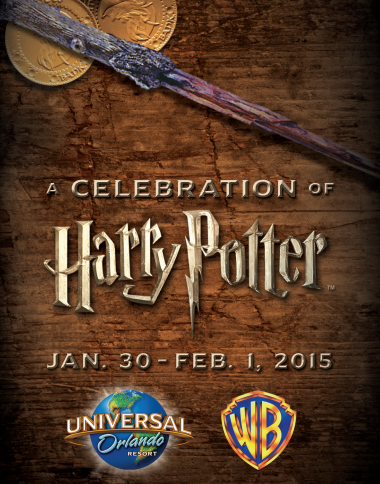 Universal Orlando has created an amazing world with The Wizarding World of Harry Potter, combining two parks with one huge story. The world lives and breathe at Universal Orlando, so much so that it’s only fitting that it should be the place that an annual celebration of the films and books happens. 2014 was the second year of the Harry Potter Celebration, and it marked the kick off of what appears to be an annual tradition.

With the huge celebration comes tons of different events, as well as chance to see some of the stars from the films, as well as the people who brought the Wizarding World to life. But what are some of the MUST SEE events and happenings? We’ll run down the top seven things you can’t miss, and the things you have to know!

Everything is in ONE Park

Last year the Celebration of Harry Potter took place in both parks, with some things happening at Studios, but the majority of the Q&A Sessions happening at Islands of Adventure. This year, according to the schedule,  the fun happens at just one park, Universal Studios Florida.  All of the panels and Q&A sessions with the film cast, as well as the many other discussions and demonstrations will all happen in the Music Plaza Stage.

One of the best things about last year’s Harry Potter Celebration was the Cosplayers. The fans really got into the fun, and dressed up in some amazing costumes, ranging from the professors at Hogwarts all the way to just Quidditch Players, witches and wizards. Cosplay is allowed at the park, but there will not be any masks allowed. There’s also no huge props, such as swords bats or anything that could be dangerous allowed in the parks…oh, and no live snakes either. If you were going to dress up as the dark lord, you’ll have to leave Nagini at home!

Guests have the chance to not only see select members of the cast speak about their experiences making the films, but they can also meet them and get an autograph. The sessions are free with theme park admission, The autograph sessions will run on Saturday 1/31 and Sunday 2/1 only. There are three autograph sessions a day, with different cast members, but they all take place at the same time, meaning you won’t be able to get time with all the cast. There’s also a limit of one autograph session per day. The tickets for the autograph sessions will be distributed at 7:30 a.m. each day in the Blue Man Group courtyard. If you want a ticket, you must be present. The big crowds will most likely be for Michael Gambon, and Robbie Coltrane who rarely make appearances. More information at the official site.

The Harry Potter Expo was a huge highlight of 2014, with so much happening that it is almost impossible to see it all in one day. This year promises to be just as busy, and just as hectic, with tons of great events happening. There will be the chance to talk to the design company responsible for the visual style of the films, learn the techniques used for wand dueling, and even get sorted into your house. The Expo is a popular destination, and can get a huge line for the exhibits rather quickly. We recommend getting to the Expo first thing, and then later in the evening to help avoid the lines.

Thanks to sites like Pottermore, many fans have legitimately been sorted into houses. Of course, many fans have sorted themselves into houses to be like their favorite characters. This year, there will be a huge meet up of every house taking place. We’re not quite sure what’s going to happen (besides probably a group photo), but it will be a great chance to meet others in your house, who share the similar qualities that you do. All of the house meet ups will take place at the Music Plaza Stage, right under Rip Ride Rockit.

The house photo meet ups schedule looks like this:

There are going to be so many chances to see your favorite Harry Potter stars on stage. All of the huge talks and Q&A Sessions will take place on the Music Plaza Stage, right under Rockit. The area is standing room only, but you will be able to get a great spot, close to the stage, if you arrive early enough. There are also some really great Q&A Sessions that bring out the technical side of things, with a talk from Mina Lima, the designers of the sets from the Harry Potter films.

We got the chance to speak with them last year, and they are just simply amazing at what they do, and they love it.

All of the demonstrations, Q&A sessions and cast discussions will take place on the Music Plaza Stage, right under Hollywood Rip Ride Rockit!

Universal Orlando offered vacation packages in early August when the Harry Potter Celebration was announced. They sold out extremely fast. This included access to special nighttime events, which will give guests VIP access to Diagon Alley and Hogsmeade. It also gives early access to the Harry Potter Expo, as well as priority spots to all Q&A Sessions. Why are we telling you about this now? The biggest reason is that there will not be any special Express of Front of the Line Options available. You’re going to have to plan to arrive early, and map out just what it is that you want to experience. We recommend studying the schedule (click here)  to figure out what you might want to experience the most. Keep in mind that the cast of the films are going to be at the two events scheduled for the stage experience, and that you will have to line up extra early for the tickets to the autograph sessions.

The other reason, there’s a pretty good chance that the Celebration will happen again in 2016, so you’ll want to be sure to be on the lookout to purchase the media packages.

Stay tuned for more Harry Potter fun, and be sure to get social with us on Facebook, and follow along with us on Twitter @BehindThrills for the latest updates!

For more information about A Celebration of Harry Potter at Universal Orlando, including tickets, visit the official website by clicking here!