It’s going to be another few years before The Lego Movie sequel hits theaters, but that doesn’t mean that everything can’t be awesome until then. In fact, all Legoland Parks and Lego Discovery Centers are going to be a little more awesome in the next few months when a Lego Movie 4D experience hits! Are you ready to be awesome again? 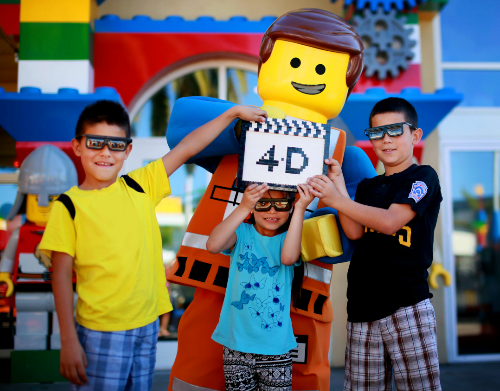 Merlin Entertainment and Warner Brothers have teamed up for an all new Lego Movie adventure that will take guests on a whirlwind ride inspired by the movie, and including all your friends from the film.

We’re excited to be partnering with Warner Bros. Consumer Products and The LEGO Group on such a, dare I say, awesome, adventure,” says Merlin Entertainments Chief Executive Officer Nick Varney. “Emmet and Wyldstyle have become immensely popular at our theme parks and Discovery Centers across the globe and bringing this new 4D movie exclusively to our guests continues our Merlin philosophy of creating memorable family experiences.”

The new film will premiere in six Legoland Parks worldwide, including Legoland California and Legoland Florida. Using elements such as wind, water, smoke and special lighting effects, the larger-than-life experience brings the film’s main characters, Emmet and Wyldstyle, back together with their friends for another awesome adventure.

There is no date on when the new film will premiere, but we’re going to say it’s likely to be later this year.

Stay tuned for more from Legoland, and be sure to get social with us on Facebook and follow along with us on Twitter @BehindThrills for the latest updates!

For more information about Legoland, including tickets, visit the official website by clicking here!