Legoland Florida is getting very close to becoming a full fledged, multi-day resort. How close? So close that they need a dragon to guard the entrance from any early sneak peeks! The Legoland Florida Hotel has just installed a massive new figure, the second figure to arrive at the hotel, and he gets so mad that he breathes fire! Okay, not really, but the figure is just another indication of how close to opening the new hotel really is! 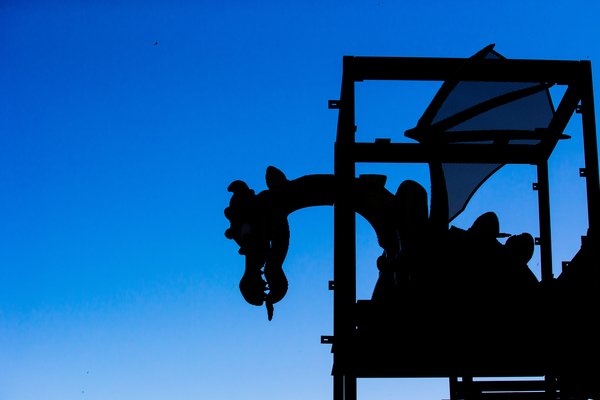 Crews have installed the huge dragon on top of what will be the clocktower that guests will pass under to enter the hotel. The dragon weighs an amazing  2,800 pounds and took about 445,000 Lego bricks to complete. Master builders and construction workers worked very carefully to move the massive monster into place.

Just in case you were worried about the dragon, there’s also a few knights around to keep him in line. He will welcome guests as he billows smoke down as you walk into the all new hotel. The hotel will be a five story, 152 room addition that will see all new Lego models, and tons of figures and fun in each room. 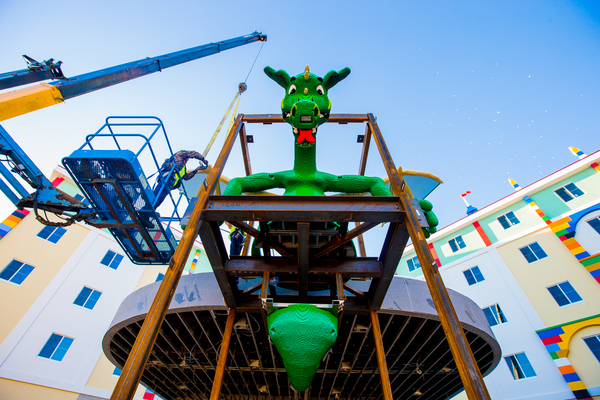 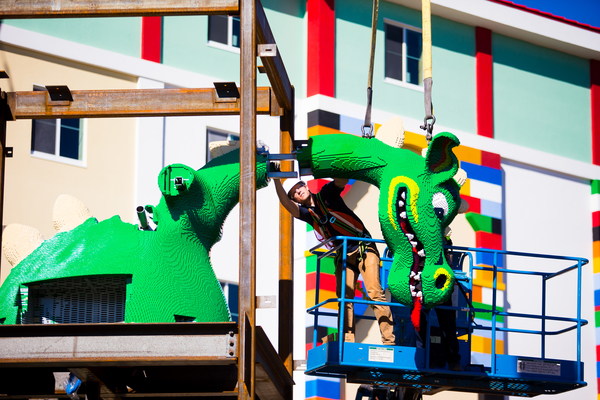 LEGO knight, a LEGO pirate and a LEGO adventurer are all onsite to not only keep the hotel safe from dragons, but to also represent the three of the four room themes. A mysterious fourth room is being kept under wraps, but if we had to guess, we’d say it will be Lego Friends…or The Lego Movie…IT COULD BE ANYTHING!

There will be more than 2,000 different Lego models in the hotel, which is taking about two million Lego bricks to complete! There will be a minimum of eight Lego models in the hotel, and a bucket of bricks for the kids to play with and make their own creations. The hotel will feature tons of activities, including the Disco-vator…an elevator that allows you to boogie your way to the top.

The Legoland Florida Hotel will open on May 15th, and will be the final step in making the Winter Haven park a full fledged, multi-day resort.