Leonard Nimoy passes away at 83

Sad news on a cold gloomy Friday as news comes that Star Trek great Leonard Nimoy has passed at the age of 83. He was best known as Mr. Spock in the classic television show, as well as in several movies. He not only starred in several of the Star Trek films, but he also directed in several.  He was a geek icon whose passing brings to light a terrible truth. 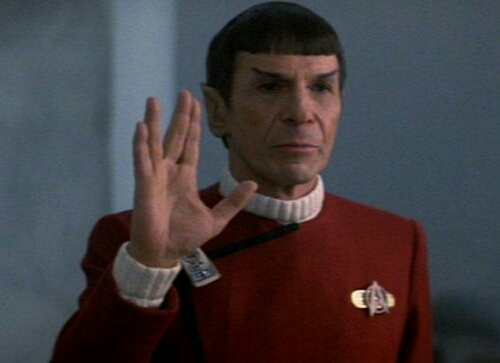 Live Long and Prosper. That was the greeting and goodbye of the Vulcan who shaped geekdom with a hand gesture.
Leonard Nimoy starred in just about all the Star Trek films, save for three. He directed and even wrote a few as well, including The Search For Spock and The Voyage Home. He also directed “Three Men and a Baby”. He was also. Transformer in the 3rd Transformers film.
It was Spock, however, that we loved him for.
His passing is a stark reminder that our icons aren’t here forever, and as geeks we will sadly see many of them leave this earth. For me, Spock helped to shape my childhood almost as much as my parents did…okay, maybe a lot less, but he was still there.
Many of us, especially those of us who grew up in the 80’s, have lived through some of the greatest times the world has ever known. We are the Star Wars and Indiana Jones generation.  We are Goonies, and we never say die.
So, today we don’t say die to Mr. Nimoy, we merely say, until we meet again.