SeaWorld Orlando ended the long running Clyde and Seamore show “Take Pirate Island” in late 2014. While the show will be missed, it’s time to take the audience back to school as Sea Lion High is now taking applications for the next semester!  SeaWorld Orlando gave passholders (and media) a quick glimpse of the new Sea Lion show. The preview only included just a few scenes of the new show, with the full show not happening until later this year. 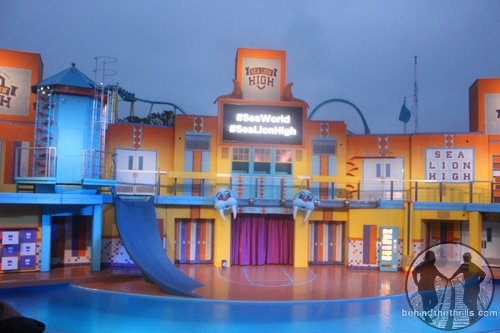 The all new show will see Clyde and Seamore trying to graduate on time, and get a scholarship, but do to a mistake, they don’t have all the classes they need to graduate. To make sure they graduate, they have to do it all in one day. Of course, it’s not going to be easy, as the school “top jock” Trip is there to…trip them up. 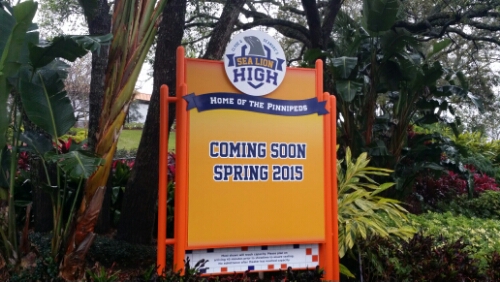 Passholders were given pom poms to celebrate the event. The preshow is filled with music, and a very light hearted atmosphere. The pre show uses music to set the mood, with renditions of popular songs from the 80’s and 90’s. 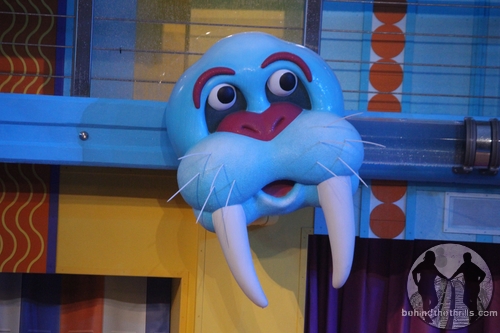 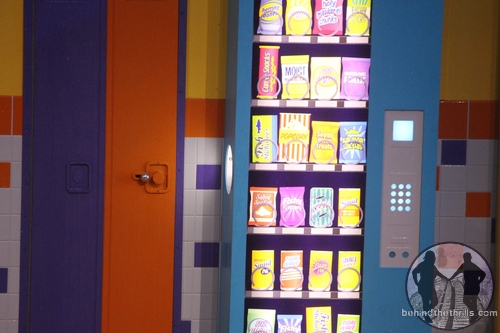 The set pops with color, and just about everything that you would expect to find in school. A gym, lockers, and even a cafeteria with questionable food make up the new setting of Sea Lion High, home of the Pinnipeds. The set itself is full of little nods to previous shows,  such as the “pinnipeds” and the “Holy Mackerel Pot Roast”.

“We really want to talk about learning, and education. We never finish learning.” said animal trainer Kelly Flaherty Clark “That’s why you find yourself in a high school. Education is fun, inspirational, and uses a little bit of our imagination. So we had to come up with a show that would fit that theme. ”
The preview was just a short look of things to come, and gave the audience a look at mostly some of the new behaviors, as well as glimpses of those behaviors in action, as they will be in the show. We’ll have to wait for the grand opening to see what hijinks Clyde and Seamore have in store, but so far the jokes and the sight gags are extremely funny, and everything you’d expect from Clyde and Seamore. The sea lions had not been in front of an audience since Pirate island closed last year. It gave the trainers time to work with the animals in an environment that is completely different than the backstage areas of the park.

Video-Get a glimpse of the all new Sea Lion High at SeaWorld Orlando!

The new show will apparently be ready in April, but from what we have seen of it, it’s going to be a huge hit with audiences. All new behaviors, sets and jokes will be a welcome change for fans who loved the old show. 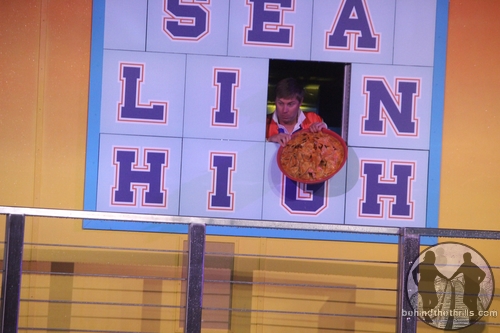 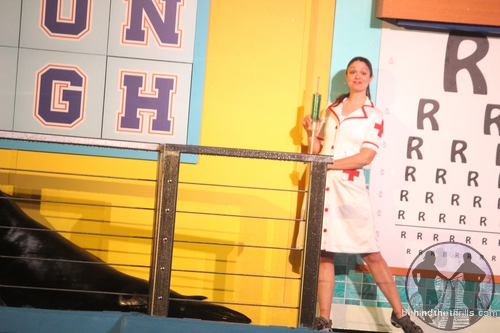 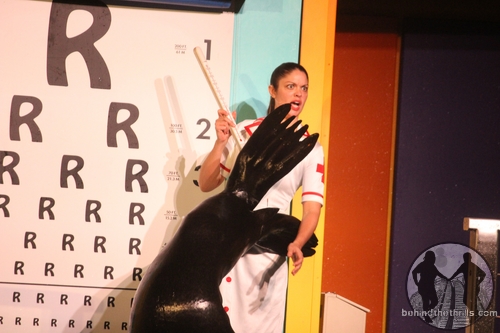 The new show is full of great new characters, and funny gags. As of right now, there’s no sign of the fan favorite mimes, but they more than make up for it with new characters like the school nurse.  Our favorite moments of the show included a visit to the school nurse, in which Seamore needs to get his temperature taken and then given a shot. The nurse plays it off completely perfectly, and the sea lion behavior is more than hilarious. We have yet to meet Trip, completely, as well as some of the other teachers, but it looks like we can expect more hilarious characters. 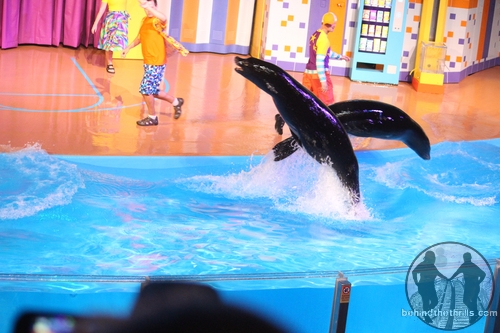 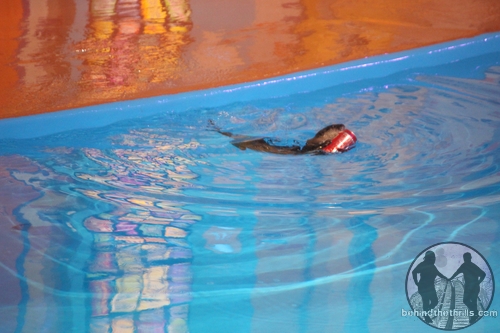 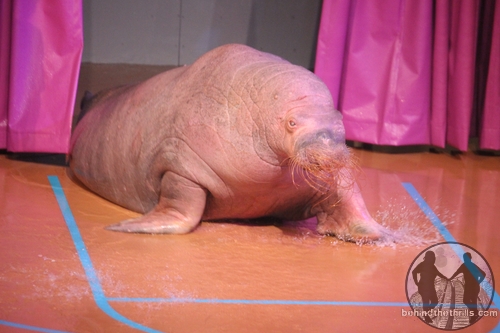 While the bit that we saw was pretty hilarious, it was really all about the animals, and their behaviors. They are really what the show is about, and during the preview they were given the time to shine. Opie Otter, who is normally relegated to hiding or stealing things, seems to have a more active role, as he recycles a can that Trip tosses carelessly into the water. Yet another great new behavior that the trainers have been working on. It also wouldn’t be a Clyde and Seamore show without a visit from a walrus. It’s always amazing to see the work that trainers do with the animals, but after a seven month hiatus, it just felt really good seeing those whiskers slide across the stage. 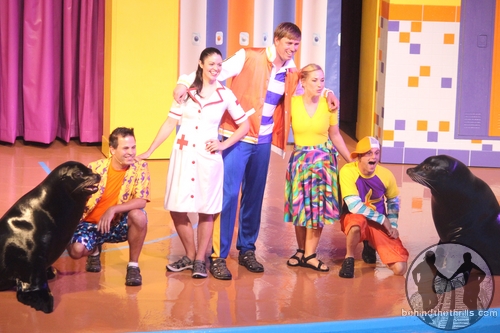 As the previous incarnations of the show have been, Sea Lion High is very heavy with the music. From the beginning, with various versions of 80’s and 90’s hits, to the finale and even the theme song. The show begins with a bright and cheerful Alma Mater type song, that pretty much sets the tone for the show.

Video-Sing along with Clyde and Seamore at Sea Lion High 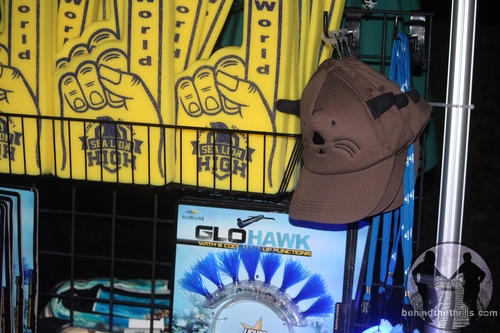 Outside the stadium, there was tons of memorabilia, including foam fingers and Opie the Otter hats. They seem to fit in at a high school football game.

Slideshow-Check out even more pictures from Sea Lion High!

We’ll have to wait to see the entire show to decide on whether or not the departure from Pirate Island was a good idea, but so far, it’s definitely a lot of fun that makes us anxious for more!