It’s the biggest news to come out of Spooky Empire.  The biggest hit of American Horror Story’s Freak Show came from the unlikely star, Jyoti Amge, who played Ma Petite. Her super cute character took the show by storm, and created a legion of fans all her own. Now word comes that she will join several other members of the Freak Show cast at Spooky Empires’ Mayhem. 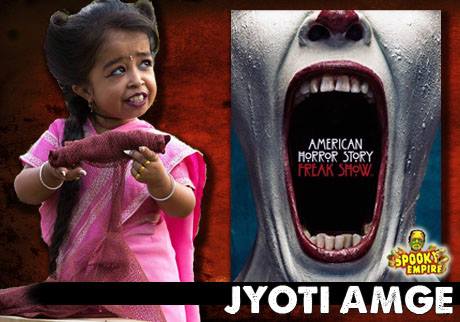 William Forsyth,  Ernie Hudson, Tom Skerrit, EG Daly  and Brad Dourif are also slated to appear at Mayhem.
This year there will also be the huge Halloween Extreme Trade Show presented by Netherworld,   and Transworld. The event kicks off May 15th-17th at the Universal Doubletree Orlando.

Stay tuned for more from Spooky Empire,  and be sure to get social with us on Facebook and follow along with us on Twitter @BehindThrills for the latest updates.

For more information about Spooky Empire,  including tickets, visit the official website by clicking here!