DIG:Escape the Room opens for a limited time at Universal Studios Florida

How do you promote a show to the masses in a way that not only makes them remember, but also challenges them the way the show will? The minds at the USA Network,  combined with the Escape the Room company of New York have answered that question with a bit of a puzzle. The two have joined forces to present the very intricate, and often complicated DIG:Escape The Room. The all new new concept is touring the country, and this week it’s stopping at Universal Orlando.

As it is a promotion for an upcoming show, it has a very limited time to be seen. And for the first time ever,they have introduced an escape the room event inside of both the Universal Studios parks. This move makes total sense at the Universal Parks, since their theme is “see the stars and ride the movies”. Although this is the small screen, you get to experience the world as if you are a character in the show, putting you right in the action. If this is successful might dictate the introduction of more cross promotions in interactive experiences. 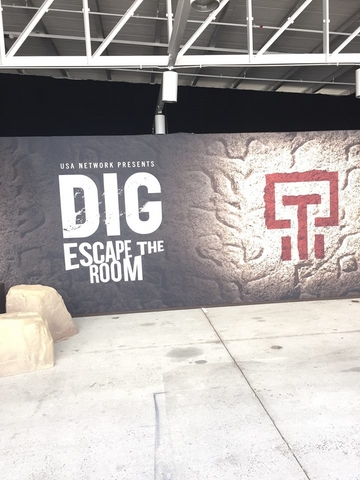 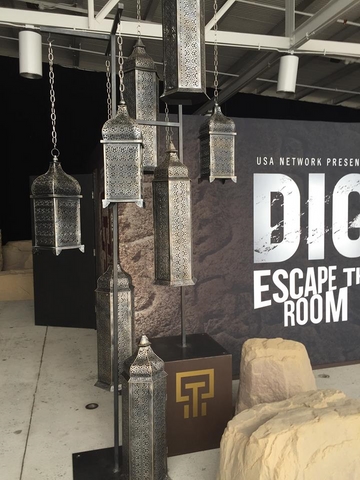 DIG at Universal Studios only allows you and your group of would be puzzle solvers 25 minutes to successfully escape the room. If you don’t get out in 25 minutes I assume you get LOCKED IN THERE FOREVER, until one of the assistants comes and lets you out. As you are in the experience, you are constantly being monitored, and if your group becomes stumped a tv mounted on the wall will prompt you to a clue that will “hopefully” lead you in the right direction. Like most Escape the Room experiences, it pays to read the clues and pay attention to what surrounds you. You can have a group of 4 to 10 but you just need to use logic and maybe a little bit of skill and you’ll make it out of there (hopefully).

Yes, we did make it out, but barely…with only 26 seconds left. The experience is a ton of fun, and we could definitely get the feeling that Universal was watching with baited breath on how it worked out. If this does work out, you might see this become a regular thing in theme parks. However, given that it only works with a small group of people, it will become a very popular commodity. This kind of experience could be used in different areas, such as maybe an upcharge experience, or even at Universal’s own Halloween Horror Nights. 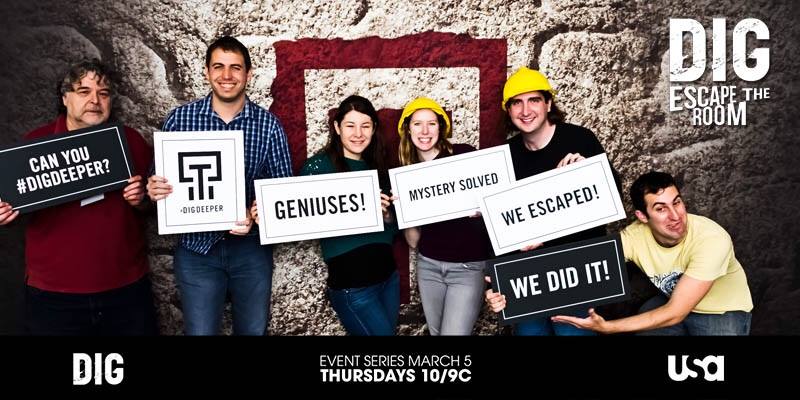 It’s truly a unique experience that takes themeing and interactivity to an all new level. It’s just one more way that we could see theme parks push the boundaries in the future.

DIG premieres this Thursday, March 5th at 10/9 Central on USA Network. The DIG Escape will be at Universal for just a few more days, until March 8th. Admission is free, but slots will fill up fast, so we recommend getting to the park early to try and get a spot.

Special thanks to YouTuber YukenDoIt for covering the event, and this report and video. Subscribe here!