It’s going to be the “coolest summer ever” at Walt Disney World, which will kick off with a huge 24 hour party at Magic Kingdom.  The real coolness will come in June,  however, when Frozen Summer Fun Live returns to Disney’s Hollywood Studios. Last year the fun was so popular that it was extended into the fall. Now it returns once again to help everyone catch that “Frozen Fever”. 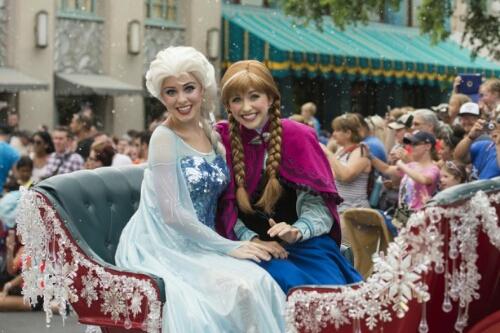 Disney’s Hollywood Studios was the home of huge crowds all summer long, thanks to Frozen. Now the party that made the summer cool is returning June 17th. The party will run until September 7th, and will include all of your favorites from last year.

Frozen Royal Welcome – Twice each day, Anna, Elsa and Kristoff take part in a festive cavalcade throughout Hollywoodland, accompanied by the Royal Arendelle Flag Corps and a flurry of skaters, skiiers and ice cutters – along with lovable snowman, Olaf. Anna leads the procession in a beautiful horse-drawn sleigh, with Elsa gliding by on a stunning, ice palace float. The entire procession pauses twice along the route in tribute to these visitors from Arendelle, as everyone in Hollywoodland is invited to join in singing “Let It Go!”

For the First Time in Forever: A “Frozen” Sing-Along Celebration – Just in time for this year’s “Frozen” Summer Fun LIVE event, this popular show moves into the beautiful Hyperion Theater (formerly Superstar Television Theater), located right in the heart of Disney’s Hollywood Studios. The Royal Historians of Arendelle host a fun and comedic retelling of the unique story of their kingdom, filled with delightful, sing-along moments from “Frozen,” plus all-new in-theater effects and special appearances by Anna, Elsa and Kristoff.

Olaf’s Summer Cool Down(New) – Several times each day, the Ambassador of Hollywoodland brings Olaf and some of his friends to the Event Stage to have a little fun with everyone “In Summer.” And as temperatures heat up, Olaf happily shares a burst from his personal snow cloud to cool things off.

“Coolest Summer Ever” Dance Party(New) – Once the sun goes down, a dance party takes over the area around the Event Stage, with DJ Chill and some of your favorite Disney characters. Using a special event hashtag, you can share song requests and photos over social media, to be featured onscreen during the party.

“Frozen” Fireworks – As the night comes to a close, Anna, Elsa, Kristoff and Olaf come together at the Event Stage for a grand finale to the day’s festivities, kicking off an awe-inspiring fireworks display set to the glorious music of “Frozen” and, of course, a flurry of snow!

There’s bound to be more announced, such as new merchandise and sweet treats. Last year the massive event had several things such as Olaf cupcakes.

Missing this year seems to be the Wandering Oaken Trading Post and ice skating.  Maybe it will be announced later.

Stay tuned for more from Disney, and be sure to get social with us on Facebook and follow us on Twitter @BehindThrills for the latest updates!

For more information about Frozen Summer Live at Disney’s Hollywood Studios, including tickets, visit the official website by clicking here!