Metal detectors go up on Rip Ride Rockit at Universal Orlando, others could follow

Can’t we ever have nice things? In what appears to a preventative measure, Universal Orlando has put up metal detectors on Hollywood Rip Ride Rockit,  a popular coaster that takes riders straight up before speeding along turns, dips and a huge loop. Twitter exploded Wednesday morning with the news as pictures of the metal detectors went up, and signs warning about loose articles and metal detectors went up on other rides. 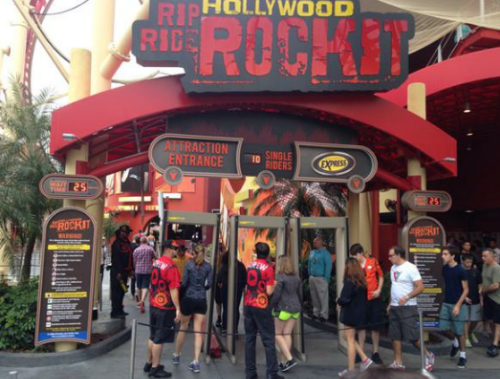 The move comes after tests were done last year on The Incredible Hulk coaster to keep guests from keeping anything in their pockets.
Signs were posted at Rockit, as well as Incredible Hulk.
Twitter user @MagicCityMayhem posted several shots of the signs, and guests passing through the detectors.

Universal Orlando has had issues with loose items on coasters before. In 2011, a man lost his eye after being struck by a flying object on the Dragon Challenge coaster. That coaster featured two coasters that entwined each other, coming within inches of hitting the other train. It was believed that someone had deliberately thrown something from a passing coaster, or even something had slipped from a pocket. Because of the incident, the park stopped the coasters from dueling.

This new issue seems to stem from the same type of problem, particularly people forgetting about smaller items in their pockets, and those items falling out onto passersby below as the train passed.
Universal offers free lockers for riders on most big coasters and rides as they wait in line, and ride. However, it appears that some either forget about the smaller items, or just refuse to use the lockers.
The metal detectors are a bit of an inconvenience, but it’s definitely better to suffer a little inconvenience than to have an injury.
While some parks, like Six Flags, use metal detectors while entering the parks themselves, this could be the first that they’ve been used on an individual ride.
What do you think? Do you feel that this is a good move?

Stay tuned for more, and be sure to get social with us on Facebook and follow along with us on Twitter @BehindThrills for the latest updates.