Selfie sticks in theme parks-Should tourists be told to stick it?

Selfie sticks, believe it or not, are incredibly useful pieces of equipment, especially when trying to get a great shot in a theme park.  Unfortunately,  they are also terribly annoying. Actually,  let’s rephrase that…The people using them are making them terribly annoying. From sticking them high above the crowd at a show and blocking your view, to walking around with them extended-documenting every second of your trip, to even taking them (and losing them) on roller coasters, selfie sticks have become one of the most annoying tourist habits. They are becoming so annoying,  and dangerous,  that some places are banning them all together.  So the question becomes, should theme parks start telling guests to “stick” the selfie sticks? 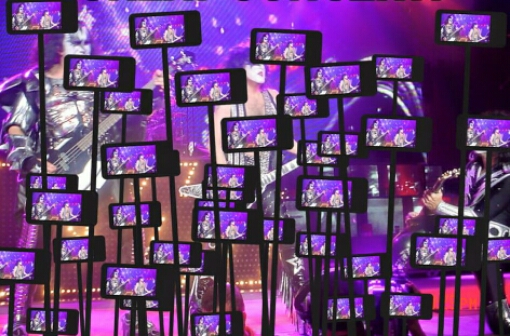 Selfie Sticks started out pretty harmless, as many things do. They make great monopods for your camera, they also are great for taking selfies, really quickly. Selfies aren’t that bad either. But leave it to people to mess up a good thing…like we always do.

Now Selfie Sticks are the scourge of not only theme parks, but also concerts, and even museums. They turn people into dummies, parading their phones (or in some cases ipads) around, completely oblivious to the world around them. They block the view of shows, leaving those in the back few rows craning for a view.

In the case of theme parks, dummies are taking them on roller coasters where (SURPRISE) they are getting ripped out of hands, and hitting other riders and those on the ground. Yes, we’re being harsh, because what could have been a great tool is now a problem…and the reason we can never have nice things.

It’s a worldwide problem as well, being banned in several major attractions all over the globe.

Now, being at a museum where priceless pieces of art, and artifacts are on display and being at a theme park are two different issues. However, the issue is still the same-safety.

People have been witness to those using selfie sticks slamming into other people while not paying attention to where they were going. Why? They’re too busy looking at their cameras to pay attention in front of them. Then there’s the ride factor. Yes, we all love great on-ride video, but for one: Most parks do not allow onride video, and two:that’s what they make Go-Pro’s with chest harnesses for. Much safer.

And, let’s not forget the annoyance factor. Traffic in a theme park is constant, there’s no need for you to hold up the entire flow, just so you can get your picture in front of a replica of a rock that was in a movie 20 years ago.

Here’s a novel idea, if you want your picture taken…ask someone to take it for you! There’s usually an employee near by, and it’s not very hard to simply say “Excuse me, would you mind taking a picture of our group real quick? Thanks!”

And that brings up another thing…an iPad is not a camera…nor should it be on a selfie stick. The same could go for a GoPro. Yes, video is great, we use it a lot…but to hold your GoPro up for a parade in the dark is not going to turn out well, for anyone.

There are no restrictions at theme parks on selfie sticks…yet. Theme parks have not banned selfie sticks, and quite frankly, it might be a bit of a nightmare (especially for Central Florida theme parks) for parks with a high international visitor rate to ban them.

Still, let’s try to be a little courteous, and realize that while the selfie stick can be used for good, it has been twisted and made evil.

What do you think? Should selfie sticks be banned at theme parks?