The Walking Dead season five finale has proven that the dead not only still have legs, but they can carry the show pretty damn far. The show broke records for a season finale, just another of the many records the show has broken. If you’re keeping score, that’s it’s own record that it broke, for the second season in a row. In fact, every single episode this season has placed in the “Top 50 telecasts in all of television in adults ages 18-49”. A pretty big feat that proves The Walking Dead isn’t going anywhere anytime soon. In fact, there is a new spin off show-Fear The Walking Dead, that will hit TV this summer. So, the real question now, will we see it again at Halloween Horror Nights? 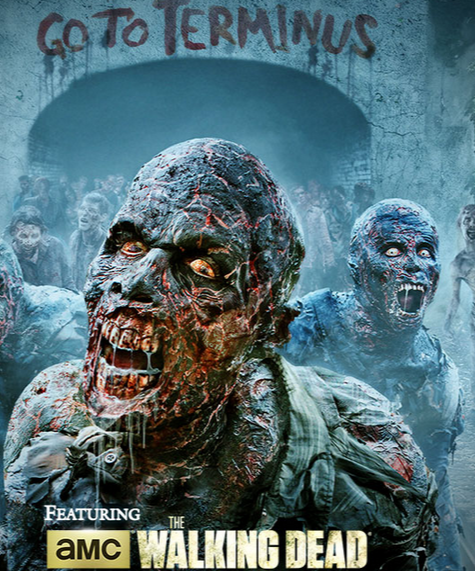 Now, before we go further, understand that there’s two types of people that attend Halloween Horror Nights. There’s the people who want to get scared around Halloween (we’ll call them the General Public, or GP) and there’s the fans. The fans have been going to HHN for a few years, and they are very passionate, opinionated (sometimes whiny) and always critical of the event. While the General Public has loved The Walking Dead at Halloween Horror Nights, the fans have not. In fact, the fans have been extremely vocal with their displeasure of the franchise’s longevity at the event. Unfortunately for the fans, they are being overthrown by the General Public who loves the Walking Dead, by a huge margin. The general public are the ones who go to the event and spend thousands of dollars on things like themed drinks, merchandise and everything Walking Dead.

So, the question becomes, will The Walking Dead return to Halloween Horror Nights again?

While zombie fatigue is definitely kicking in, The Walking Dead is too profitable of a franchise to ignore. The season finale had the highest numbers of any season finale, in the history of season finales. The season left on a cliffhanger…again…and there were some really huge visuals that would translate very well into a Halloween Horror Nights house…or scare zone…or terror tram.

If that’s not enough, then there’s the huge new companion series that will kick off this summer, and will most likely be a huge hit.

Yes, Fear the Walking Dead could very well be yet another property that AMC and Universal could mine.
So, we’d say that despite what fans say, the general public is all for The Walking Dead. Although Universal has yet to confirm it, and we’re just doing some good old fashioned guessing, there’s a good possibility that The Walking Dead will cross paths with HHN at least one more time, if it doesn’t become a staple of the event on an annual basis.

Stay tuned for more Walking Dead and HHN goodness, and be sure to get social with us on Facebook, and follow along with us on Twitter @BehindThrills for the latest updates!