Disney is gearing up for the “Coolest Summer Ever”, and of course you can’t have cool without Olaf. The snowman from Frozen will be on hand to host the biggest party of the summer, with all kinds of huge fun at Walt Disney World in Orlando. It all kicks off with a massive all night party at Disney’s Magic Kingdom on Memorial Day weekend. 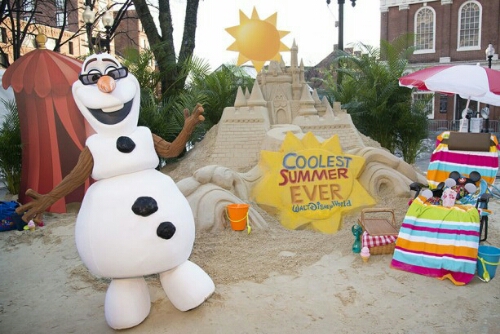 ABC’s Good Morning America made the announcement on Wednesday about Magic Kingdom,  and Walt Disney World.  Of course,  Frozen is going to be the focal point of the new “Coolest Summer Ever” campaign,  with Frozen Fever both appearing in theaters and sweeping the world. If you thought the fervor around Frozen has died down, just wait until the all new short film makes it’s debut with Cinderella Friday.

The Coolest Summer Ever kicks off on Friday May 22nd, and will run for a full 24 hours. The event goes from 6 a.m.-6 a.m. May 22-23, and will feature all the amazing Magic Kingdom rides, attractions and shows. There will also be special merchandise, treats and activities.  It’s an annual tradition that has been a huge kick off for the summer.

The fun doesn’t stop there, with tons of happenings at many of the Walt Disney World parks and resorts.

Here’s a rundown of the summer from Disney:

New Restaurants and Shopping – Throughout the summer, new waterfront dining and boutique shops flow into the Downtown Disney shopping/dining/entertainment district as its transformation into Disney Springs continues.

There will be more fun announced as the summer gets closer, and other parts make their announcements for summer plans.
Disneyland is expected to make a similar announcement later this morning.

For more information about the “Coolest Summer Ever”, including tickets, visit the official website by clicking here!