Ash vs. Evil Dead on Starz gets a teaser trailer, more cast details

All hail the king baby.  Ash from the classic Evil Dead series is back in am all mee television series exclusively on Starz! The new series will be based on the original films written and directed by Sam and Ivan Raimi, and directed by Sam Raimi. The series has gotten a teaser trailer, as well as a new poster. It’s not a lot, but after such a long time, does it need to be? 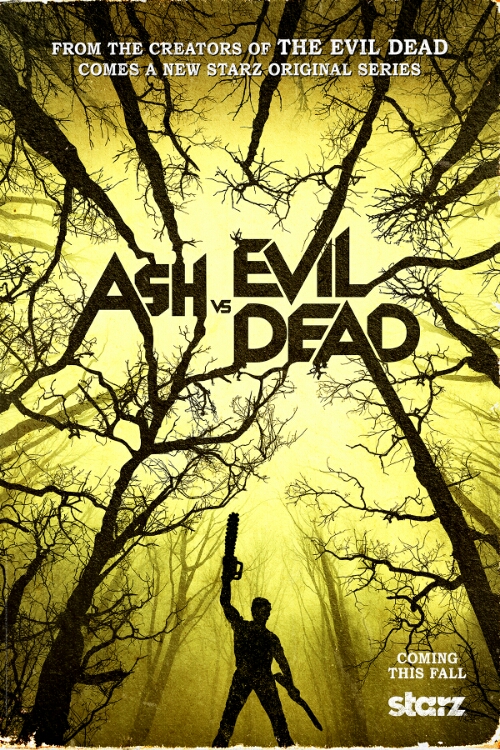 Starz will air the half hour show this fall, and it will of course feature the legendary Bruce Campbell as Ash, the one armed chainsaw handed, shotgun wielding hero who slew Deadites in the first three films.
Sam Raimi serves as director of the first episode of the new show, and wrote the show with brother Ivan. The Raimi brothers and Campbell will produce.

The fun part is the huge cast, which we know a bit about, as well as the plot of the show. It appears that Ash will be pretty much dodging responsibilities, and kicking Deadite ass.
Here’s the cast, and a little bit about the show:

Campbell will be reprising his role as Ash, the stock boy, aging lothario and chainsaw-handed monster hunter who has spent the last 30 years avoiding responsibility, maturity and the terrors of the Evil Dead.  When a Deadite plague threatens to destroy all of mankind, Ash is finally forced to face his demons –personal and literal.  Destiny, it turns out, has no plans to release the unlikely hero from its “Evil” grip.

The cast is led by Bruce Campbell (Evil Dead, “Burn Notice”) in the role of Ash Williams, Lucy Lawless (“Salem,” “Spartacus”) as Ruby a mysterious figure who believes Ash is the cause of the Evil outbreaks, Jill Marie Jones (“Sleepy Hollow”) as Amanda Fisher, a disgraced Michigan State Trooper set to find our anti-hero Ash and prove his responsibility in the grisly murder of her partner, Ray Santiago (“Touch,” Meet the Fockers) as Pablo Simon Bolivar, an idealistic immigrant who becomes Ash’s loyal sidekick and Dana DeLorenzo (A Very Harold & Kumar 3D Christmas) as Kelly Maxwell, a moody wild child trying to outrun her past.

The series has also released a teaser trailer, which honestly is simple, but fun.

Okay, we are beyond excited now!
There’s no exact release date for the series, but we can only imagine they’ll end up making a huge announcement at San Diego Comic Con in July.

The real question, will we see it at Universal for Halloween Horror Nights? Most likely not, but you never know. Most likely not this year, but if the series is huge, you can bet in next year.

Stay tuned for more Evil Dead goodness, and be sure to get social with us on Facebook and follow along with us on Twitter @BehindThrills for the latest updates!