We can’t say we’re surprised,  but Disney is mining it’s animated film catalog for more live action conversions. We’ve already had Maleficent, Cinderella, and will soon get Beauty and the Beast, as well as Dumbo. Now comes the chubby little cubby all stuffed with fluffy. Winnie the Pooh will be the next in line to get the live action treatment. 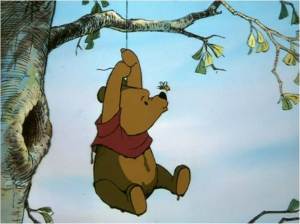 No major details have been released,  but we imagine it will be a mix of live action and animation,  much like last year’s Paddington.
Pooh has a huge history at Disney, being the first animated short film that was released in theaters in 1966. The film is being headed up by Alex Ross Perry. The 30-year-old indie filmmaker garnered rave reviews at  Sundance last year with audience favorite, Listen Up Philip.

There’s no release date as of yet, but The Jungle Book will hit theaters next April, with Beauty and the Beast in 2017.

TAGDisney Winnie the Pooh
Previous PostMake a Play Date at the San Diego Zoo During Play Days 2015 Next PostAsh vs. Evil Dead on Starz gets a teaser trailer, more cast details