#NothingFaster coming to SeaWorld Orlando in 2016

SeaWorld Orlando has made an announcement to ticket sales partners that an all new coaster is coming to the park in 2016. No huge details have been revealed,  but we do have some rumors. There will be a full reveal in late May, but what exactly could we be looking at? 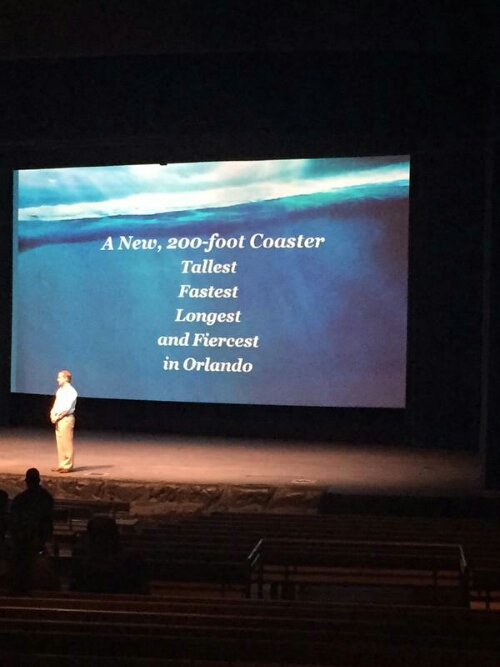 During a partner meeting for the park, execs announced that a new coaster would be hitting the park in 2016. We’ve heard rumblings of this for some time, but it’s the first time actual details have been released.

The new coaster will be the tallest coaster in Florida at over 200 feet tall. It will also break speeds of 70 mph. It will also be over 4,429 feet long, making it the tallest, fastest and longest coaster in Florida.  The tallest and fastest currently belongs to Sheikra at Busch Gardens Tampa, with the longest belonging to Cheetah Hunt also at Busch Gardens Tampa.

So, what will it be themed to, and where will it go? Seeing that the park is putting the emphasis on speed, we can only assume that the park will theme the coaser after the world’s fastest fish. The Black Marlin reaches speeds of 80 mph…but a Marlin lacks the fear that something like a shark will have. It’s likely the new coaster will integrate sharks somehow. The coaster could take a SeaWorld San Antonio favorite,  The Great White. Seeing that the Great White is one of the most fierce predators in the ocean, and the new coaster at SeaWorld will be one of the fiercest coasters in Florida, it kind of makes sense. As for location, a few months back crews were spotted doing surveys around the Nautilus theater.

It’s likely that area will be the location for the new coaster, as that end of the park is probably about the least populated with attractions.
Update

SeaWorld Orlando has revealed a statement that has something in it.

Something is stirring beneath the surface at SeaWorld Orlando, preparing to rise from the ocean depths and soar to thrilling new heights. Get ready for the frenzy of SeaWorld’s new 200-foot-tall coaster. In 2016, this thriller will take its place atop the food chain as Orlando’s tallest, fastest and longest coaster.

Depths of the ocean, top of the food chain, soar to new heights. Let’s break this down. Sharks are top of the food chain…besides Killer Whales. The Mako shark is the fastest in the ocean, and jump out of the water. Great White sharks also launch, and soar after prey. Could we be getting a launched wing rider? It’s possible, but a launched coaster being a coaster over 200 feet? Maybe not.

According to Florida Trip Guides, who was at the event the park said it would be a B&M coaster. Makes sense since the park already has two B&M coasters. That hasn’t been officially confirmed, but if it was announced at the presentation this morning, it’s more than likely happening. However, that could be inaccurate, and it could very well be a different company altogether. The chain has a history of working with Mack coasters, including Journey to Atlantis, and the San Diego version of Manta. We’ll have to wait and see.
All will be revealed later in May, so stay tuned for more!

For more information about sea world, including tickets, visit the official website by clicking here!