When you have adorable minions at your beck and call, wouldn’t you stop and say hello? Academy Award nominated actor, 40 year old virgin, and the greatest Dundler Mifflin manager that ever walked the earth, Steve Carell had some fun with his ‘despicable’ friends outside the Despicable Me Minion Mayhem attraction during his visit to Universal Orlando Resort earlier this week. 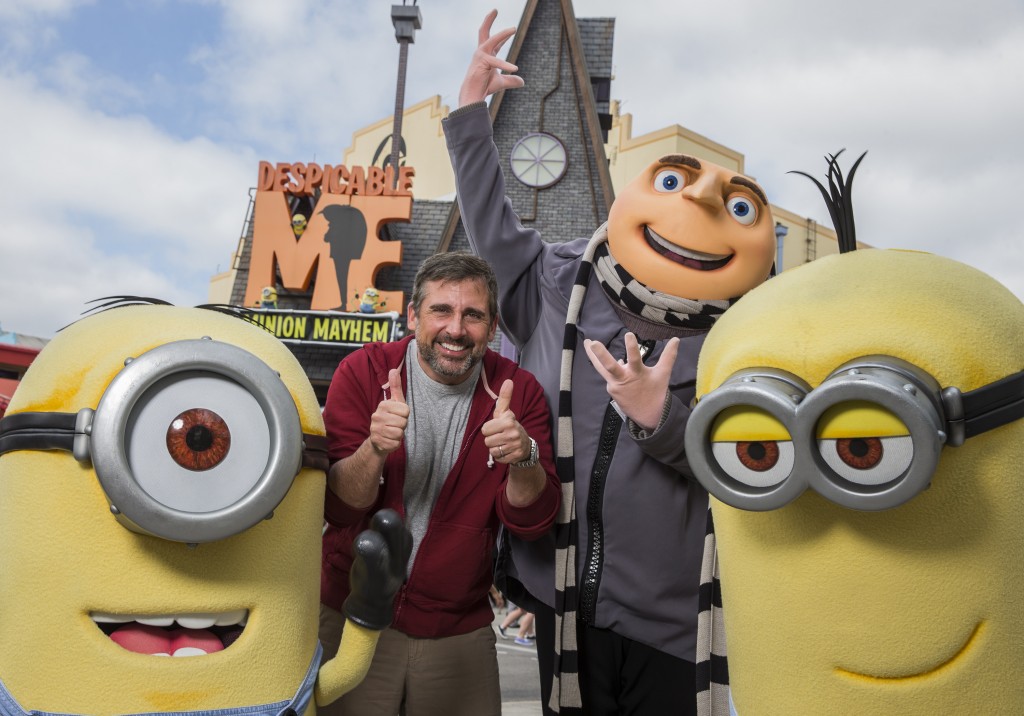 Based on the blockbuster animated film, where Carrell plays the villain Gru, Despicable Me- Despicable Me Minion Mayhem combines an all-new story line, incredible new animation and the latest 3-D technology to create a sweet, yet wildly hysterical theme park experience for the entire family. The attraction opened in 2012 at Universal Orlando along with the Minions addition to the daily Superstar Parade. The attraction is an amazing hit with families, and Minion lovers alike.

This summer the fun will continue as The Minions take over the big screen in an all new movie hitting theaters this July. The film will tell how the Minions have been behind every single major villain in history. With something that big happening, you can bet that there will be tons of Minion fun at Universal Orlando.

In fact, families wanting to take the fun out of the theme parks can book a Minion themed room at Universal Orlando’s onsite hotel, Portofino Bay Hotel.

Video-Sleep like a Minion in the themed Minion Suites!

Minions hits theaters July 10th!
Stay tuned for more Minion Mayhem, and be sure to get social with us on Facebook, and follow along with us on Twitter and Instagram @BehindThrills for the latest updates!

For more information about Minions at Universal Orlando, including tickets, visit the official website by clicking here!

TAGDespicable Me Minion Mayhem Minions: The Movie Steve Carrell Universal Orlando Universal Studios Florida
Previous PostCinema and Celebrities to be in attendance at the Florida Film Festival Next PostBusch Gardens Invites Guests to Get "Wild" With Animal Expert Jack Hanna