The Legoland Florida Hotel is just steps away from Legoland Florida itself. While the two are definitely separate entities, they work together to bring families closer together, and give kids of all ages a way to explore and expand their imagination. The new hotel offers a little something for everyone, including parents, but it’s the kids that the hotel aims directly at, and it’s with the kids that it delivers. We were able to not only stay at the Legoland Hotel, but also explore, and look at it through the eyes of one of the people that it’s meant to impress the most. 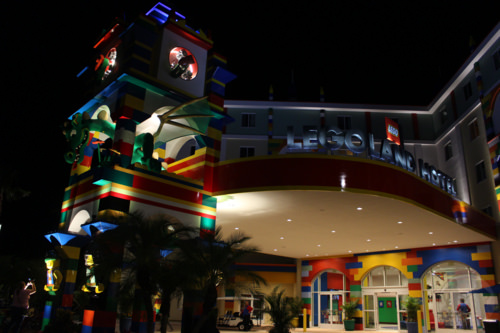 The hotel is whimsical, and full of wonder from the very first time you look at the entrance. It’s guarded by knights, pirates, adventurers and even a dragon. Once you walk into the lobby, you are fully immersed into a world where Lego reigns supreme. It’s also a world where imagination is encouraged. There’s a shelf where hotel guests can display their creations, and even a pit as soon as you walk into the front door, right across from the check in desk, where everyone is encouraged to play, build and create. 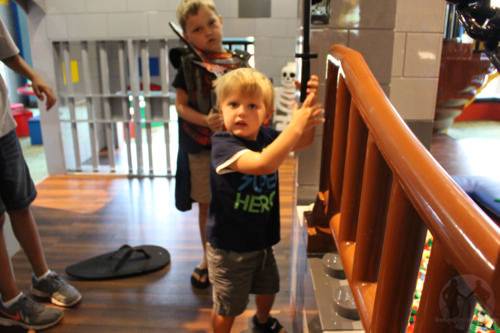 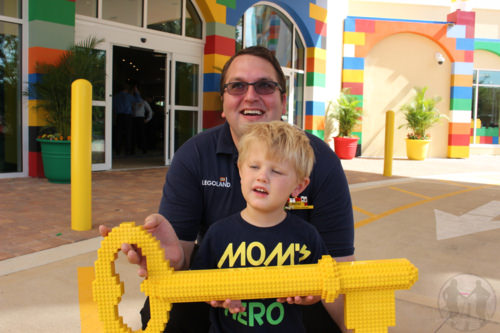 We can sit here all day and talk about how wonderful a place it is from a critic perspective, but we wanted to get a truly honest perspective. We were fortunate enough to bring along our two year old nephew, Bee. Bee is a typical boy, in the respect that he loves to run, jump, play and fight. He’s been through seemingly everything in the past two years, from Yo Gabba Gabba, to Mickey Mouse, Elmo and even Thomas the Train. Now, he’s set on dinosaurs, pirates and knights…you know, the perfect time to visit a place where those characters reign supreme.

The hotel not only includes a huge area for playing with Lego bricks, but also a huge play area, with a massive castle, pirate ship and of course tons of Lego bricks everywhere. There is a huge ogre, as well as skeleton, and of course the pirate ship has a mermaid on the mast-all made of Lego. It’s the perfect place to let imagination run wild, and it absolutely did. Directly off to the left of the check in counter, there’s a gift shop filled with Legoland memorabilia, including everything that a kid would need to play. It’s a really great move from the management, but a bit of torture for the parents. Of course the first thing that Bee saw was a cool sword and shield set. So naturally mom broke down (was there even a fight?) and bought it for him. It was money well spent as we spent the next hour watching Bee having fights with all the “bad guys” that were around the play area. Hiya hiya hiya was the mantra of the morning, and we even were able to watch our little hero rescue the princess…a few times. 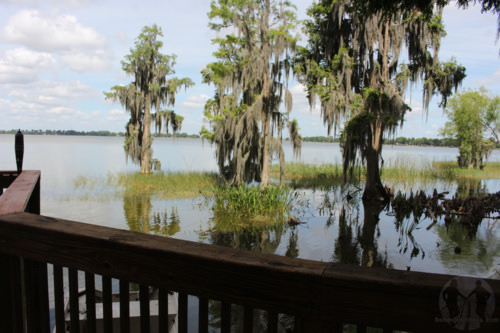 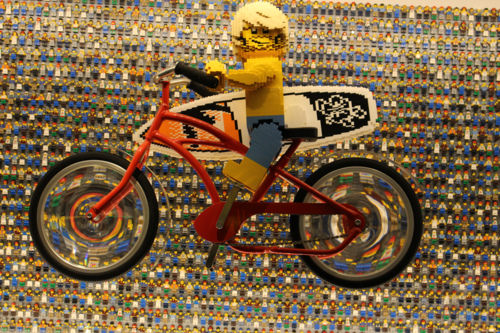 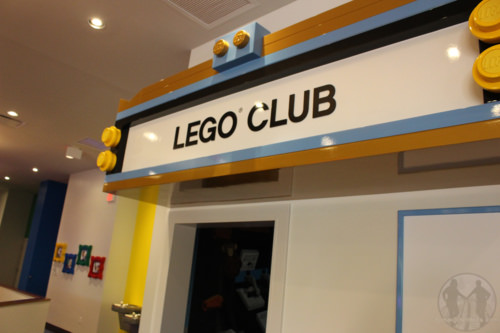 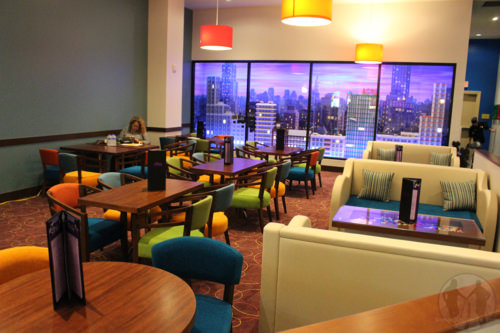 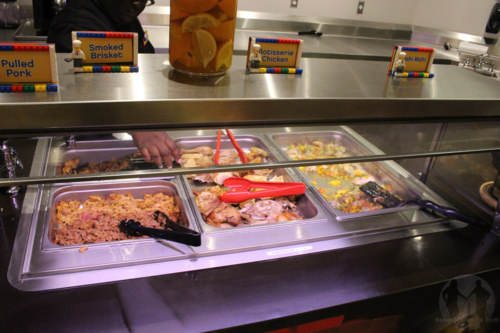 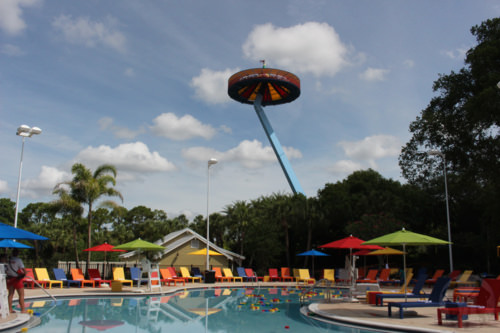 So, what about from a vacation standpoint? Does the hotel deliver? In a big big way. While the rooms are a little on the pricey side (starting at $219 a night) they are definitely aimed at the families, and take them into consideration. Each stay comes with free breakfast at Bricks Family Restaurant, which is a full buffet style restaurant. There is a zero entry pool, filled with Lego bricks, and even a place for mom and dad to take a romantic stroll alongside the lake.

Brick’s Family Restaurant also serves a buffet style dinner, and kids can even color on the table cloths. It’s a pretty cool feature that we found ourselves doing a lot. If you don’t want to do buffet, Skyline Lounge offers more “gourmet” offerings in a bit more of a formal setting. Of course, they are a lounge so mom and dad can get a few cocktails if they like as well.

The one problem that many might have is that Legoland Florida isn’t open 365 days a year…yet. It’s something that will come eventually, and the Legoland Hotel is definitely one more step in that direction. If you find yourself staying on one of those days, where the theme park isn’t open, it’s actually not that bad. There are several places for the kids to play, and even the Lego Club. The Club will give kids the chance to sign up for the Lego Magazine (for free) and gives them a place for activities. Every evening there is a building competition, as well as characters that roam the lobby. They play with the kids, and perform shows, involving the entire family.

How hard is it to take part in the class?
Video-Build a space shuttle in the Lego Master Builder class at Legoland Hotel

We’ve talked a lot about the hotel itself, but what about the rooms? Do they actually deliver? There is something for everyone, and the rooms can definitely accommodate a family of five. 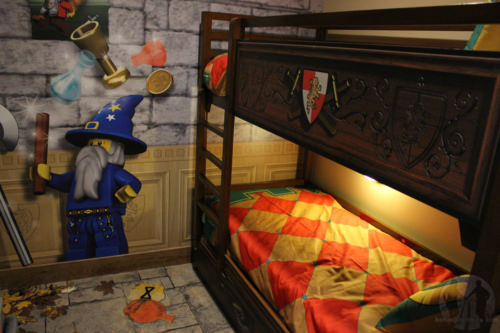 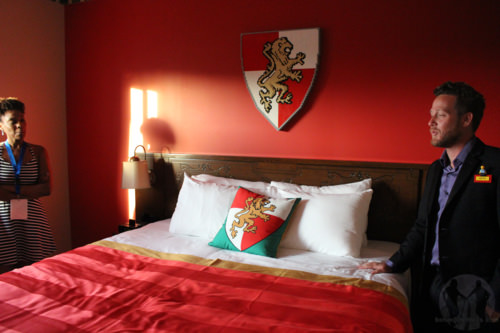 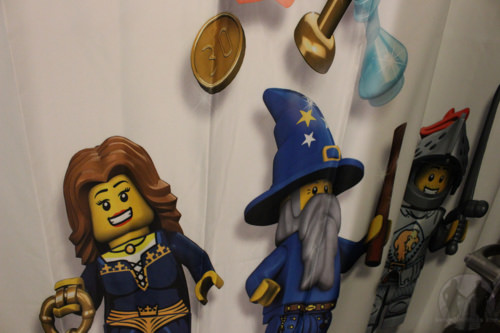 There is a separate place for mom and dad, and even a place for the kids both to watch television when they aren’t out of the room. The rooms are also highly themed, in one of four different motifs. Parents can either get pirates, kingdom, adventure or Lego Friends.

Lego Friends takes on a decidedly more girlish tone, and is colored in hues of pink and light purple. While it is neutral enough to satisfy everyone, it does lean more towards the pre-teen girls.

The rooms all come with complimentary juice and water, as well as a scavenger hunt for the kids, in which they can solve riddles and open up the chest that is in each room. Each chest is full of goodies for kids, including an activity book and some Lego models to build and take home. Each room contains at least six different Lego Models that decorate the room, and the bathroom is even themed. If you want to get a little extra space, there is even a huge VIP suite that sleeps up to 8 people and is more of an experience, rather than just a room.

We were put in the Pirate themed room for the night. So what did our Bee think of it? Check out his review below!
Video-A 2 Year Old Reviews the Legoland Florida Hotel Pirate Room!

Overall, the hotel makes for a great addition to a family vacation, and is a great way to let the imaginations of the kids, and parents alike, run wild.
Slideshow-Check out over 500 pictures from Legoland Florida in our gallery below!

We will have a better look at the rooms, and explore each theme more in depth, so be sure to check back for more from Legoland Florida. Click here for all of our Grand Opening Coverage so far!

For more information, including reservations, visit the official website by clicking here!