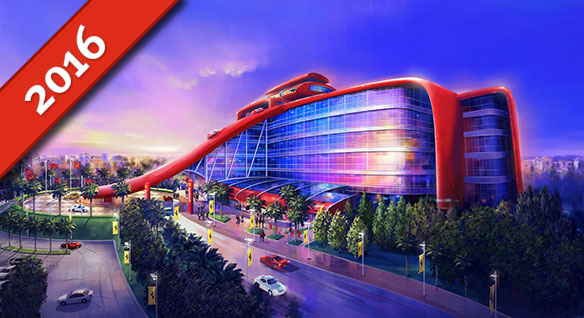 Ferrari Land at Spain’s PortAventura marks a $100 million Euro investment in the 20 year old theme park. The new addition will be a separate ticket, and will expand the theme park another 75,000 meters (or about another 18 acres). The biggest rumor of the park was the roller coaster, seen in much of the concept art. It was rumored to be the world’s tallest coaster, topping Kingda Ka by 3 feet, but according to the official site, the new coaster will be 367 feet tall, and blast riders off at 111 mph (118 kph) which will make it the tallest and fastest coaster in Europe.

The original plans for the park included a huge Ferarri themed hotel, but those plans were put on hold until after the park opens.

The entrance to Ferrari Land will be at the entrance to PortAventura, and will include a gate into that park as well. The new park will also serve as an all new world in PortAventura, themed to Italy. The architecture, restaurants and shops will reflect the new theme as well.

Stay tuned for more from PortAventura, and be sure to get social with us on Facebook, and follow along with us on Twitter @BehindThrills for the latest updates!

For more information about PortAventura, including tickets, visit the official website by clicking here!