The Orlando Eye stands tall above the Orlando skyline, as an all new landmark that beckons riders from all over the world. The huge 400 foot tall observation wheel is the centerpiece of the all new I-Drive 360. The all new area has been slowly building up to the May 4th opening, with new restaurants and clubs going in place. Now, the main attraction is open, and it’s literally the biggest thing Orlando has seen…so far. 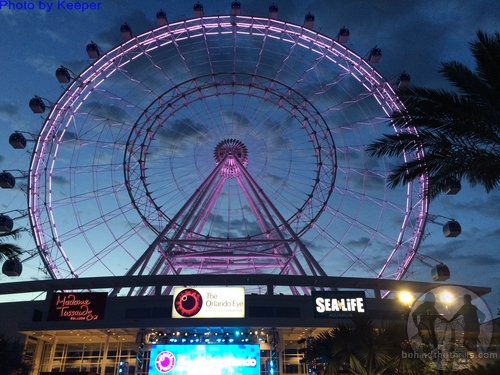 The Orlando Eye takes riders in one of several huge gondolas, high above the Orlando landscape. Riders can see everything in all directions for miles, which includes Walt Disney World, Universal Studios Florida, SeaWorld and all of the lakes that surround the area. The Eye makes for an amazing ride, both day and night and is a great way to fill up your Orlando vacation. 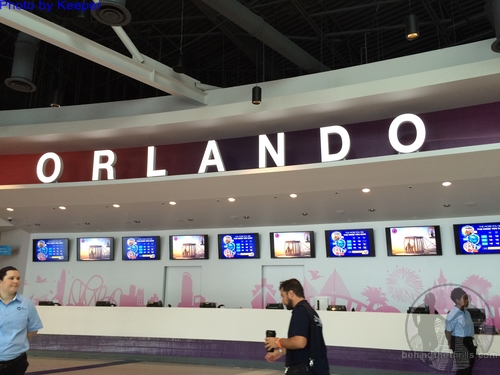 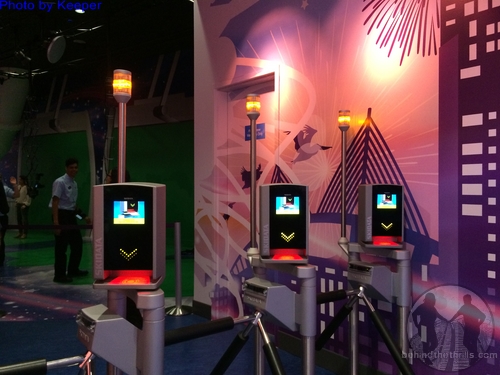 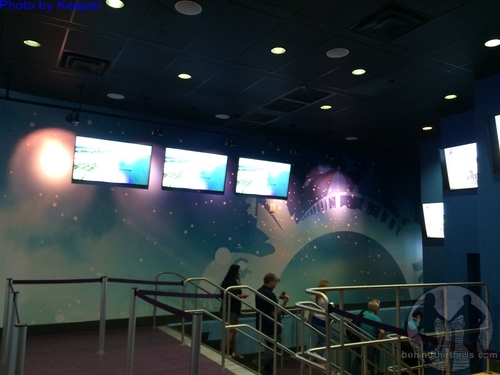 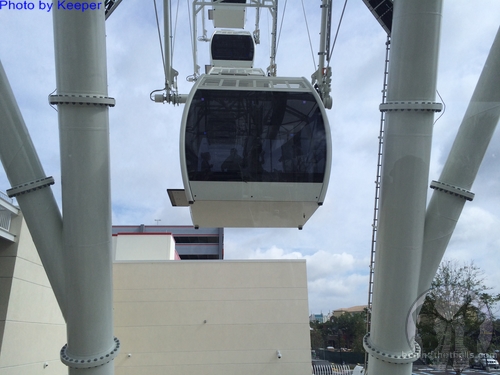 Before stepping on to the Eye, guests step up to the airport terminal like counter to order a ticket. Then you are whisked away into a photo studio to get your picture taken. The interesting thing about the construction of the Eye is seen here, as it is literally built into the building. Pieces of the Eye’s supports can be seen poking through the building.

Once guests get their photo taken, to be seen after the ride, they are ushered into a 4D theater experience. The experience is similar to Soarin Over California at Epcot, as it takes guests all over Orlando and Florida, with hints of smells and water effects. The story of the Eye is a little hokey, but it gets the point across, and builds up the excitement for the adventure ahead. It includes footage of the beaches, orange groves, swamps, and even some of Orlando’s theme parks. Universal, SeaWorld and Legoland are all included in the film, but Disney (possibly the biggest attraction in Orlando) is not present.

Once guests exit the theater, they are shown to the loading platform, and ushered on to the Eye row by row. The Eye is constantly moving, at a brisk 1 1/2 miles per hour, but it is slow enough to get on and take your time doing so.

Video-Take a flight on the Orlando Eye

The ride itself is a slow one, and is good for all ages, heights and weights. The cabin is large enough to hold about 16 guests comfortably, but the less crowded the cabin is, naturally, the better. The wheel moves slow enough to not give any anxiety for those afraid of heights, and fast enough to not be boring. 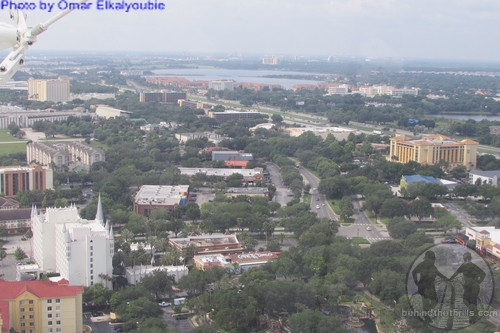 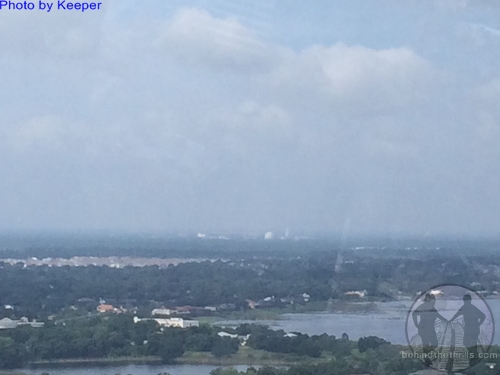 Admittedly, going up, the views are a little less than exciting. Parking lots and hotel roofs are really all that surrounds the Orlando Eye area, but once guests get above the skyline, the views of landmarks like Disney, Universal and SeaWorld are really spectacular. The entire experience is narrated, and you get an idea of what you are looking at as you rise above the world. The one thing that many don’t realize, myself included, is just how much water is surrounding the area. There are a lot of lakes in Central Florida, and you can see how the landscape weaves in and out of the lakes. 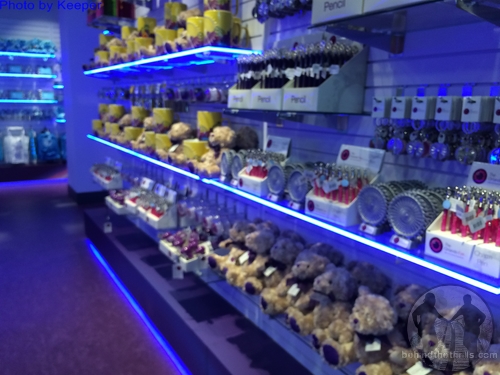 Once the ride is over, guests are ushered into a gift shop where all manner of Eye merchandise can be purchased. Remember those pictures you took before getting on the Eye? Those are available to view, and purchase right away. The photos come in a keepsake book that tells about the Orlando Eye and the area around it. 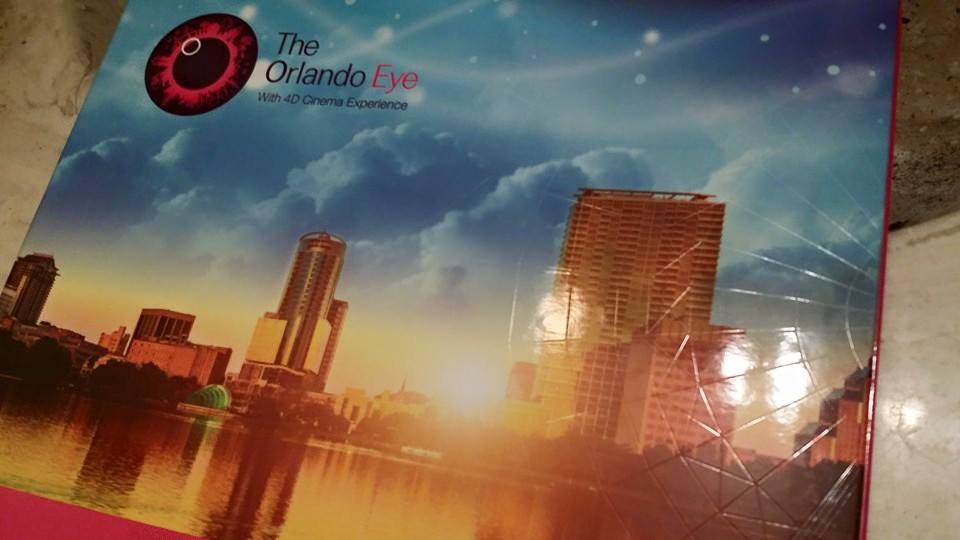 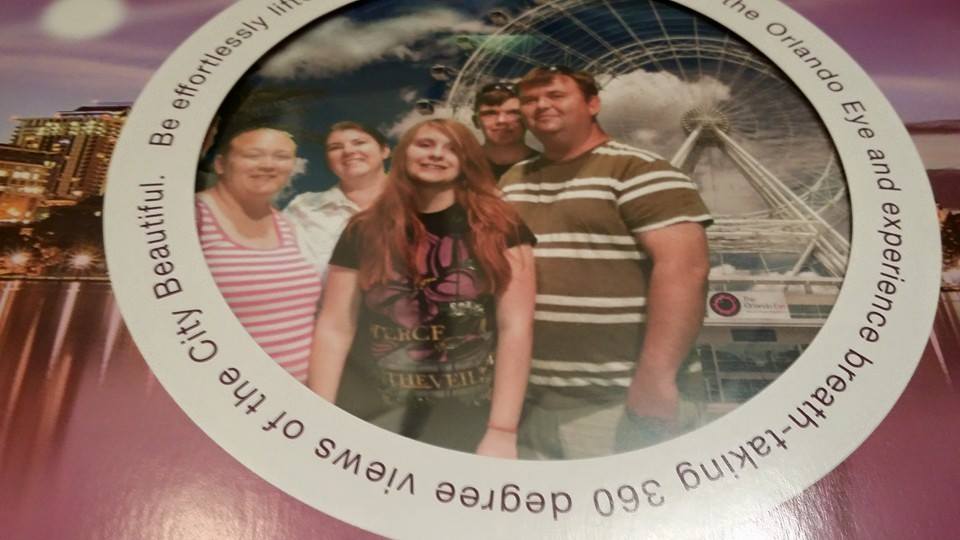 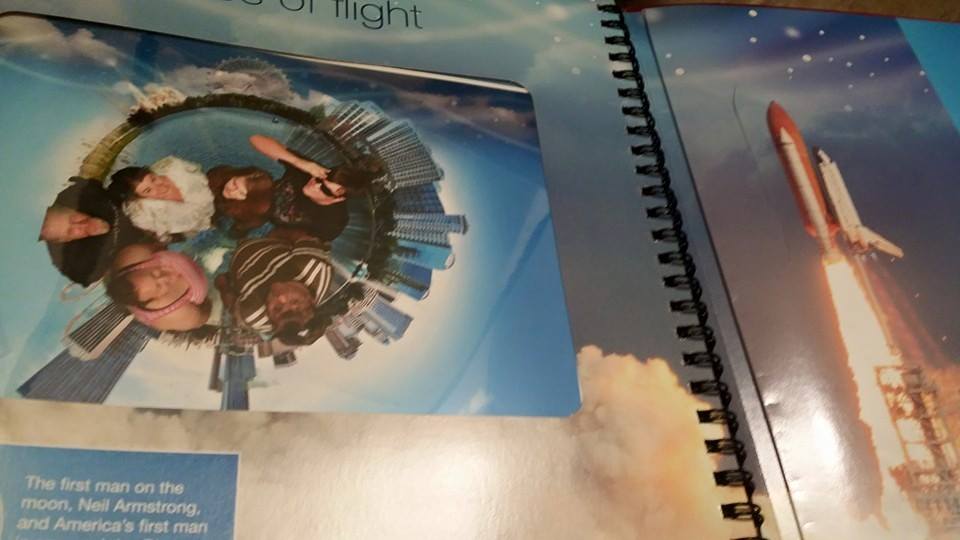 The photo books include two pictures of your group, both with you super imposed into the Eye, or various scenes around The Eye. It’s a bit better than your standard theme park souvenir photo, although if you frame these things, it’s kind of tough as it takes away from the book.

Slideshow-Check out even more pictures of The Orlando Eye

Things to know before you fly: