Universal Orlando has been on an amazing roll, in 2014 the resort opened Diagon Alley, an amazing sequel to The Wizarding World of Harry Potter at Universal Studios Florida.  They also opened eight all new venues in their CityWalk complex, which is the first step in a never ending revamp. They also opened the huge, super cool Cabana Bay Beach Resort. If that wasn’t enough,  the resort then announced yet another hotel, Sapphire Falls opening in 2016. To top it all off, they also announced Skull Island: Reign of Kong.  Now the resort is getting all wet as the park unveils one of the most massive and unique  projects to date. Are you ready to venture into Volcano Bay? 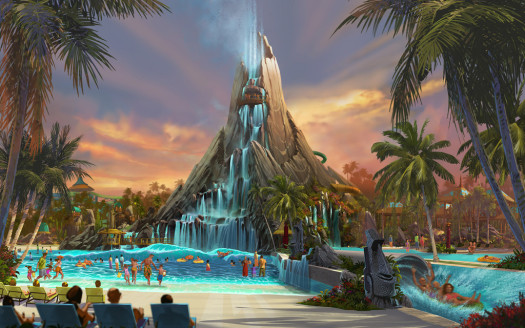 The all new waterpark will open in 2017, right next door to Universal’s Cabana Bay Beach Resort, and will feature a huge 200 foot tall volcano. By the looks of the concept art, the waterpark will feature a huge wave pool, and possibly a massive slide inside the volcano itself. If you look, you can see a slide coming from the base, as well as what looks like people standing on top of the volcano. There also appears to be a massive wave pool at the base, as well as other attractions centered around the volcano. If rumors are correct, the main ride will be a massive water coaster, much like Crush n Gusher at Disney’s Typhoon Lagoon.

Like all Universal projects, this new waterpark will have a massive theme that will tell a story. This one is about a forgotten island paradise, formed by a volcano that is still active. It’s sure to make for some huge eruptions and awesome experiences.

Not many details were released, but it will “redefine the waterpark experience”. Construction is already well underway, and it’s just the beginning! More details will be released as the park gets closer to opening.

For more information about Universal Orlando,  including tickets, visit the official website by clicking here!