Universal ups the ante with Nintendo theme park attractions-When will Disney match it?

Universal is on a roll with some major theme park attractions. The theme park chain has shown, with the opening of Islands of Adventure, that they are serious about bringing immersive theme park attractions to life in ways that no one has seen before. The world took notice in 2010, when Universal opened the Wizarding World of Harry Potter at Islands of Adventure, and even Disney started getting nervous, putting the breaks on it’s then in development “New Fantasyland” and completely retooling the plans. Disney has since made some major investments, bought some huge IP’s, but have taken their sweet time getting any major attractions open. Avatarland was first announced years ago, but it’s finally getting a little momentum, and looking at a late 2017/early 2018 opening. That’s over five years from when it was announced. Universal, in the meantime, has announced and open a new major attraction every year, as well as a huge hotel. Disney continues to wait, and open high end, high cost options while Universal churns out new options on a yearly basis. The question is, when will Disney roll out the big guns, and will it be to late by then? 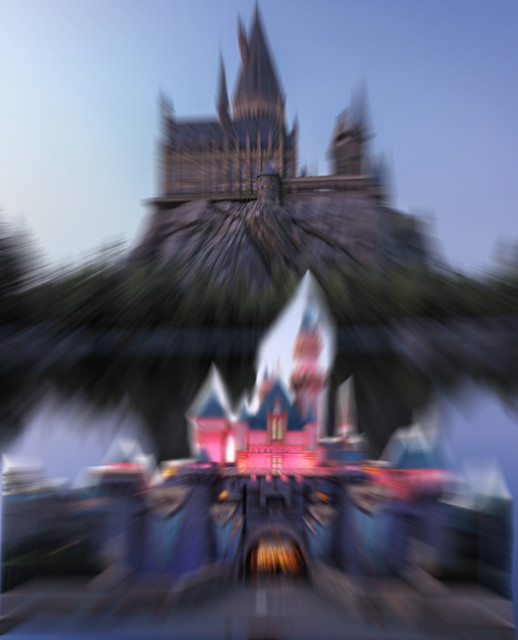 For years, Disney has been the king of theme parks. They still are, with annual attendance reaching around 20 million guests at JUST MAGIC KINGDOM in Orlando. Universal has struggled to get where they are, but they are making huge strides with immersive experiences like Harry Potter, The Simpsons, and soon, King Kong. The parks have scaled back their “in your face” approach and have gone a middle of the ground route with things like Despicable Me, and Transformers. Now the company has announced the partnership with one of the most influential, and recognizable, video game companies in the world. In a deal announced Thursday, Universal and Nintendo will be bringing theme park attractions and characters to life in the theme parks.

Disney has two major weapons under their belt, but have yet to unholster either one in a way that makes a difference. With Marvel, the company is limited to just overseas, and West Coast parks, due to an existing deal with…you guessed it, Universal. While that’s great for the other parks, the real money has proven to be in Orlando at Walt Disney World.

Meanwhile, the company is sitting on any plans to expand their Star Wars Land, which would completely and utterly dominate theme park planning for years.
With all this fire power, Disney is still being cautious about any plans, simply because Universal is doing things that Disney thought was impossible.

Changing the Game
Universal’s forray into Harry Potter was a game changing experience for the theme park industry. When it soft opened, execs from Disney took a quiet trip to Universal to look at the competition. According to sources at Disney, what they saw scared them.
Universal had not built an attraction, but an entire world. Everything was themed, from the attractions, to the food and even the bathrooms. It was a world in and of itself. The way themed attractions were before Potter, the attraction was the main attraction, and everything was built around it, but once you left the gift shop, it ended. Sure, Disney would have areas themed to a fantasy world, but when you left the Haunted Mansion, that was it. Potter shifted that thinking completely. Instead of ending at a gift shop, the entire world existed outside of the ride…and it all built the ride up even more.
Disney had put the breaks on their projects, and because of it, you have things like Carsland, and even a more immersive New Fantasyland. There’s even rumors that James Cameron reportedly hated some of the concepts for Avatarland, because they weren’t as immersive as Harry Potter at Universal.

Out with the old

Another major thing that Universal has done is to completely reshape the face of their parks. Ten years ago, Islands of Adventure and Universal Studios Florida looked completely different. Ten years ago, Magic Kingdom looked relatively the same way that it did 20 years before that.
Universal isn’t afraid to change the face of what they do. 25 years is a long time, but in comparison to the 40 and 60 years of Disney, it’s just not as established. You don’t have the traditions that have been passed down over generations at Universal that you do at Disney. While that might sound like a bad thing, it actually gives Universal the freedom to completely start over if they need to.
Universal has a very limited amount of space, so to build new attractions, they have to get creative with the placement. When you’re talking about a huge area like the Nintendo area will most likely be, you have to do something more than just be creative.
Universal is constantly looking at areas and rides that aren’t being utilized to their fullest. That’s why when Nintendo breaks ground, it will most likely be in the area that is now occupied by Toon Lagoon. Yes, we’ve heard the Marvel rumors, and it really doesn’t make sense, if you think about it.
Marvel makes money. The rides are popular. Sure, there’s that Disney problem, but Universal is actually in a real good place. Toon Lagoon, however…When is the last time you saw Dudley Do Right on a T-shirt, or saw a Popeye movie?
By keeping Marvel, and getting another hugely popular franchise, while getting rid of one that not a lot of people have heard of, Universal stands to make more money and bring in more guests.

Disney owns Star Wars. Disney owns Marvel. When will they do anything with them? Hong Kong is getting an Iron Man ride, but what about a full fledged area? Marvel is super hot right now, and while Marvel has been around a very long time, they have never been as popular as they are right now. Anything with name Marvel on it is a license to print money…but there’s that contract with Universal.
As we said before, yes…we know the rumors about a buyout from Disney. But, from a business standpoint, it makes zero sense. Universal pays a percentage to Disney, which is probably small in comparison to the money they make from it. Disneyland, Hong Kong and all the other parks are not competition for Universal. Yes, Disney is huge, but the most popular destinations are in Orlando, not California, Hong Kong or Paris.
Universal would have to not only lose the money from having the characters in park, but the second that contract is up, Disney is going to run and make another park. They’re going to load it with Marvel and will market the living hell out of it. Then, it becomes competition.

The only possible way Universal releases the contract is if there is a huge wad of cash, AND a time frame that Disney has to wait before they build a new park or attractions with Marvel characters. The idea there is that while Universal tears Marvel out, they also build something else in its place…but not only that. Every popular trend fades. Marvel movies will not be popular forever, and with a glut of films coming out in the next five years, it’s likely that in 3 years Marvel popularity will have reached it’s peak, and will decline. Plus, DC Comic movies are starting heavy next year…that’s a lot of superheroes all at once. Maybe, Universal will simply wait out the popularity of Superheroes before releasing the contract.

Then you have Star Wars. I wouldn’t be surprised if Disney moves up timetables on Star Wars projects to beat Universal and Nintendo to the punch.

What exactly will happen isn’t certain, and everything here is nothing but analysis, speculation and guessing. We’ll have to see what happens, but regardless of what happens, Disney is no longer treating Universal like the annoying little kid down the street. They ignored him, only he didn’t go away…He’s growing uo, and soon he might be bigger than you in the neighborhood.

Stay tuned for more from Universal and Disney, and be sure to get social with us on Facebook and follow along with us on Twitter @BehindThrills for the latest updates!