Happy Birthday JAWS! Celebrating 40 years of the original terror from the deep

When you think of huge sharks, or even going to the beach, there’s a good chance you think of JAWS. The blockbuster film, directed by Steven Spielberg turns 40 years old today. It was a time before blockbusters, and huge summer movies…it was a time before that, but JAWS changed it, opening to huge crowds and setting a precedent for summer movies. The film set records, and inspired several sequels (none being as good as the first) and made Steven Spielberg a household name. Today we say Happy Birthday to that mean ole shark, and take a look at how he the shark influenced the world. 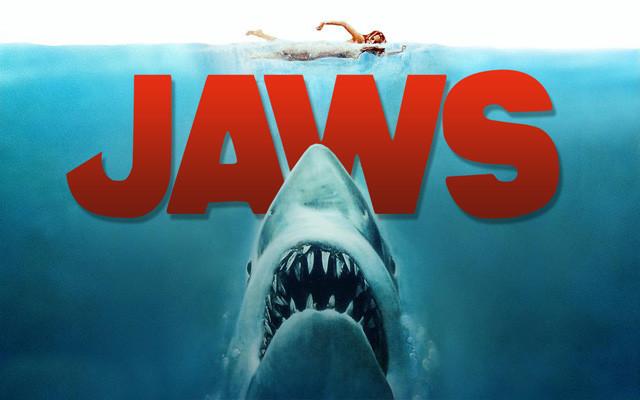 JAWS is a pivotal piece in cinematic history, however, it almost didn’t happen. The film was based off of the Peter Benchley book by the same name. Spielberg wasn’t the original choice for a director, the original director couldn’t tell the difference between a whale and a shark, so they gave the film to Spielberg. The film suffered all kinds of setbacks, most famous of which being the mechanical shark not working properly, and in fact sinking to the bottom of the ocean. While the film is considered the launching point of Spielbergs’ career, he has called it the most difficult film making experiences he had ever had.

The documentary “The Shark Is Still Working” showcases all of the stories behind the making of JAWS and gives a great look at the film, from the eyes of the fans.

While the response to the film was huge, it wasn’t all positive. JAWS is usually cited by people as being the reason that people are afraid of sharks, and going into the ocean. JAWS also caused a catastrophic surge in the killing of sharks, something that author Peter Benchley has since worked on helping to reverse through conservation efforts.

Still, the impact of the film was felt not only in theaters, and on television screens, but also in theme parks.

JAWS has been a staple of the Universal Studios Backlot Tour since the 80’s, with the shark popping out of the water as guests go by on trams. The set has become such a large part of the tour that it has been used in several films and TV shows.

The JAWS portion of the ride has even received an upgrade as part of the all new Nighttime Studio Tour at Universal Studios Hollywood.

In 1990, Universal Studios Florida opened, and with it came a new version of JAWS. The ride featured the shark chomping down on the boats, and dragging it around the lagoon before getting blown up by the skipper on the boat…just like in the film. However, constant problems forced the ride to be completely rebuilt, and reopened in 1993 with a version that featured the shark biting a cable, just like the ending of JAWS 2.

The ride was closed in 2012 to make room for the all new Wizarding World of Harry Potter: Diagon Alley. While JAWS was still fairly popular, it was a very expensive ride to maintain, due to the large amounts of fire effects, and mechanical parts that were submerged underwater.
Slideshow-Check out a tour of the Amity Area at Universal Studios Florida

The new area does have several hidden tributes to JAWS, including shrunken heads singing “Show me the way to go home” from the film. The ride is missed, but the impact is still felt all over the park, and is still celebrated in the park.

Universal Studios Japan still has a version of the attraction operating, and it is one of their most popular attractions. JAWS still lives on in Japan.

JAWS is one of those films that sticks with you, and becomes a part of you, if you let it. The film has followed many throughout their lives, including myself and my children, and has brought many people together in their sheer terror of that big ole shark that devours helpless people.

JAWS is a film that, hopefully, will never get remade and will stand on it’s own as one of the most popular films of all time.
Stay tuned for more fun, and be sure to get social with us on Facebook, and follow along with us on Twitter @BehindThrills for the latest updates!