A concert at Formosa Fun Coast waterpark in the Taiwan city of Taipei, turned into a nightmare as an explosion rocked through a crowd Saturday.  The explosion injured over 200 people, with about 100 seriously injured. The incident occurred during an event sponsored by a different company. 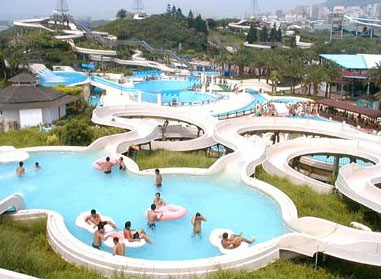 The explosion is thought to be caused by a colored powder that was sprayed into the crowd. Video shows a powder spreading through the crowd, followed by flames. According to officials, it’s believed that the powder may have been ignited by the heat of the lights on stage.
Many of the seriously injured were immediately transported to local hospitals, while mini medical stations were set up on the premises to help treat many of the injured on site.

“We are very regretful for this accident that caused injuries to many victims,” Formosa Fun Coast said in a statement. “The most urgent matter currently for us is to handle and assist with victims on the scene and work comprehensively with the New Taipei Fire Department.”

The event was called the “Asia Color Play Party” and was presented by a separate marketing firm, not associated with the waterpark. Many of the attendees were in bathing suits, resulting in many suffering burns over 40% of their bodies.
Thoughts and prayers go out to everyone involved.
Update
Video of the explosion is now on YouTube. It’s pretty graphic, watch at your own risk.
Video-Explosion at Waterpark:Warning, very disturbing

We’ve also been able to speak with some pyrotechnics experts here stateside, and according to them the cause of the explosion looks to be colored cornstarch. This is the same stuff used in the various “color run” 5k events. It’s safe and nontoxic, as long as it’s not in vaporized form. The video clearly shows whatever powder they were shooting at the crowd in a vapor form. There’s a good chance the powder was cornstarch in a pressurized tank to spread it over the audience. Also, it looks as if a flame went off.

Update
The final count of the injured from.the explosion Saturday at Formosa Fun Coast waterpark is 497. Of those injured, 180 are in critical condition, and one has died, with more possible.
The event organizer was allegedly warned that the powder was flammable, and that it could ignite under the heat from the lights on stage. The organizer of the event, and an engineer have been arrested, and released on bail.
It’s a very terrible tragedy, but it really had nothing to with the waterpark, as they were only the venue in which the event was held.

Stay tuned for more on this story as it develops, and be sure to get social with us on Facebook and follow along with us on Twitter @BehindThrills for the latest updates.