SeaWorld Orlando to host most patriotic weekend ever with huge concerts, fireworks and SHAMU!

Light up the Fourth of July with SeaWorld Orlando, as they host what could quite possibly be the most patriotic event ever! The park will continue both their Summer Nights celebration, as well as their huge new “Celebrate America” Concert Series. If that wasn’t enough, they will light up the night with a massive fireworks display, and the Navy Band Southeast of Jacksonville, Fla. It’s all part of SeaWorld’s big celebration of America, and it’s all included with theme park admission! 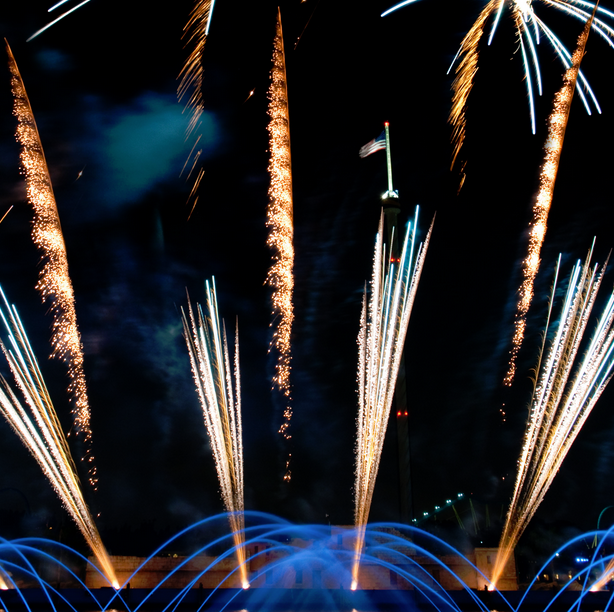 The fun kicks off Saturday, July 4th with SeaWorld Orlando’s Celebrate America Concert Series. This week is very patriotic with the American Military Spouses Choir. The choir will perform in the Nautilus theater at 5p.m. and 7:30. All members are married to active United States Soldiers, Sailors, Airmen, Marines and Guardians. They inspire audiences with rousing renditions of inspirational songs and original music, and songs that show support to their fellow military family and service members.

Then the party really begins at 10p.m. with a huge fireworks display at Bayside Stadium. The fireworks will include a spectacular, patriotic-inspired show featuring the Navy Band Southeast of Jacksonville, Fla. This patriotic ensemble of musical professionals is one of 11 official U.S. Navy Bands in the country.

Of course there’s also all the fun of the shows, with Sea Lion High and Shamu’s Light Up the Night!

Then, on Sunday, the fun continues with another concert, Lee Greenwood. His song “God Bless The USA” is a patriotic staple.

Stay tuned for more from SeaWorld Orlando, and be sure to get social with us on Facebook and follow along with us on Twitter @BehindThrills for the latest updates!
For more information about SeaWorld Orlando, including tickets, visit the official website by clicking here!