Thrill seekers may have to wait a little longer to take climb aboard the world’s tallest coaster, but it is definitely happening. In fact, the Skyscraper Skyplex recently cleared a major hurdle needed to get the ball rolling. The ambitious project is still waiting for the final clearance to get construction started, but the project is indeed happening, according to the owner of the property. How much longer will we have to wait? That really depends on how ambitious construction gets. 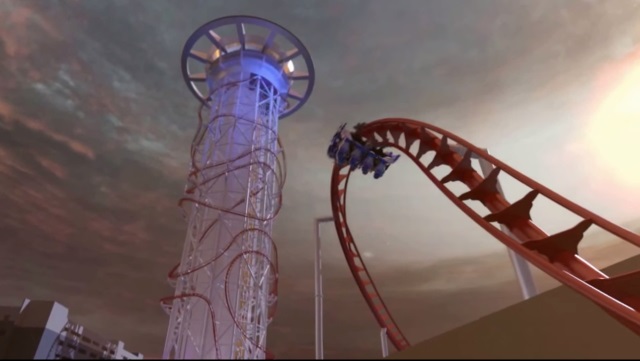 Every time Wallack Holdings LLC talks about the Skyscraper Skyplex in Orlando, the plans just get bigger and bigger. The site is already going to be the home of the world’s tallest coaster, but it’s also going to boast the world’s tallest drop tower, a 600 foot long zip line attraction, and a new surf park. That’s just for starters.

It’s also going to be home to the world’s biggest Perkins, which is an odd choice, but there’s a reason for that as well.

The entire project needed the approval of the Federal Aviation Administration to even consider getting close to reaching that 570 foot tall mark needed for the world’s tallest coaster. According to “Letters of Determination” filed with the FAA, the Skyscraper Skyplex will pose no threat to air traffic in Orlando.

So what does that mean? That means that the FAA is okay with the Skyscraper. In fact, the permit is filled with tons of information. The entire structure of Skyscraper is going to be about 700 feet tall, with 570 feet of that being coaster, and the remainder being an observation deck and restaurant. The construction time is also listed to be from April of 2015 to October of 2017.

That brings us to the next news about Skyscraper. In an interview with WESH in Orlando, Josh Wallack is quoted as saying:

“I think 2017 is a little aggressive,” he said. “I’d like to say we’d be substantially complete with the Polercoaster tower and many of the buildings on the site by 2017 and then we’d be onto the interiors. By spring of 2018, it’ll be rock ‘n’ rolling.”

The original plans for the coaster were to open in 2016. Those were pushed back to 2017, and now…with construction looming, it looks like Spring of 2018 will be the magic number. So why the delay? It was all in buying the land. Wallack Holdings had to not only buy the property that was for sale, but also property that wasn’t for sale, including the Perkins. In fact, the only way to get Perkins owners, General Electric (say what?) to sell that property was to buy seven more Perkins franchises…which they did, at a price tag of $29 million. That’s the reason the new Skyplex will have the world’s biggest Perkins.

They then also had to come up with a plan to keep traffic from being a pain, and keep pedestrians safe for crossing the busy Sand Lake/I-Drive intersection. That plan came with buying an old Walgreens, and converting it into a parking garage. The parking garage will then be linked to the other attractions by a huge walkway OVER Sandlake and I-Drive. It’s an ambitious plan, but now that all the ducks are in a row, it sounds like construction will finally begin by the end of this year.

You can read more about the plans and the hurdles by checking out the WESH story here.

There are tons of other plans, such as a hotel, retail space and of course the huge Mango’s Tropical Grill, which itself will be a major attraction.

Josh Wallack reached out to us and said that the biggest reason for delays now is that there are six parcels of land, which are now in the process of being rezoned into one giant site. That has to happen before building permits can even be pulled. It’s a lengthy process, but with an investment of around $50 million dollars already, he assures us and others watching the project that Skyplex is happening.