Well that was certainly fast. On Wednesday Disney announced that it would be opening an NBA Experience,  and Restaurant at Disney Springs. Thursday,  Universal Orlando  announced that the contract with The NBA was not renewed, and that they will be closing their CityWalk restaurant,  NBA City. 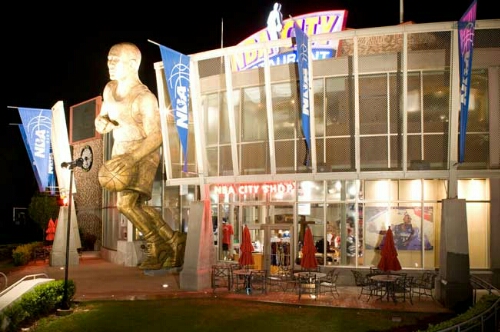 We asked the question whether or not both NBA restaurants would remain open and today, via the Universal Facebook page, we got our answer.

Several months ago, we decided not to renew the lease for NBA City so we could create an exciting, new concept for that…

NBA City at Universal Orlando CityWalk will be closing in August to make room for an all new concept. What is the new concept? Rumors have been all over the place, from a new specially designed Cheesecake Factory restaurant, to a WWE Hall of Fame restaurant, to even a Universal movie set themed restaurant. Nothing has been officially announced, and it may not be any of these, but something else that has not been rumored yet.
It’s a little early to tell, but we expect that an announcement will come very quickly, after the closing of NBA City.

For some reason, the restaurant never seemed to take off, though countless people loved to get their pictures taken in front big the giant basketball player statue.

Disney announced that their new NBA Experience will include interactive elements, as well as a store and restaurant. No word on how similar b
the new concept will be to Universal’s NBA City.