Universal Studios Florida celebrated 25 years of theme park fun, adventure and riding the movies in Central Florida. The anniversary sees Central Florida the focus of a massive theme park war, where Universal is challenging the empire that is Walt Disney World. Today we see Central Florida as pretty much, the theme park capital of the world. The area between Orlando and Tampa has more than 16 major theme parks and waterparks, all within an hours drive of each other. There are also a flurry of smaller attractions, parks and rides in between that area. For the longest time it was an area dominated by Disney, but in the past 25 years it’s gradually become a huge destination away from the Mouse. So, what was the turning point? Yes, it was the onslaught of more competition, specifically, Universal Studios Florida. 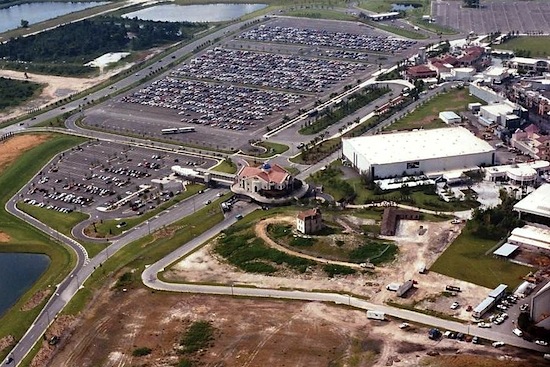 Disney vs. Universal. It’s a debate that theme park fans have on a constant basis, and lately it’s a question that has more people speaking passionately about Universal Orlando. In 25 years, Universal has gone from being known as a movie park with a tram, to a worldwide leader in theme park experiences. It includes five different parks, in four different locations all over the world, with more coming. Many other parks in the world look to Universal, as well as Disney for inspiration. 25 years ago, there were really only two types of theme parks. Coaster parks, and Disney.

So how did Universal change it? To answer that question, we need to go back to 1986 and a guy named Michael Eisner.

I know what you’re thinking, Eisner was a powerhouse at Disney. According to Jim Hill Media, the project started off as an almost exact replica of Universal Studios Hollywood. There would be a tram, with several of the same old attractions mixed in. The cost began to balloon, so Universal looked to the outside for help, mainly Paramount. Executives were pitched a plan about a new theme park, that would mirror what there was already in California. Among those execs were Chief Operating Officer, Michael Eisner.

Eisner was very into the idea, and very interested in how the industry worked. However, he would later become the CEO of a little company called Walt Disney, and in 1985 announce the opening of a third Walt Disney World Park in Florida that would take guests behind the scenes and show them the inner workings of a movie park, complete with a tram tour, where key attractions would come to life. Where have we heard that before?

After some debate about scrapping the plan and suing the ever loving hell out of Disney, Universal partnered with Cineplex Odeon Corp and decided to go ahead with the plans of opening a new movie based studio tour park. The only problem is that now, the park had to be completely different than originally planned. Instead of taking guests into scenes of their favorite movies via tram tour, the new tour would be a walking tour of a studio backlot. What’s more, the tour would feature huge versions of the little scenes that Universal Studios Hollywood already had. New lands were created to not only work as theme park backdrops, but also as shootable sets. And thus, the immersive world of Universal Orlando began.

Instead of simply representing what movies were about, Universal had a plan to put people into the movies. Who better to put people into the movies than the people who actually created the movies? Universal brought in Steven Spielberg to help create JAWS, and ET as well as become a consulting partner on the rest of the park. He’s still a consulting partner, and helped to create the look and feel of many of the resorts signature experiences, including Portofino Bay Hotel.

So, how does this make Universal responsible for changing theme parks in Central Florida, let alone, the world?

Up until that point, no one in Central Florida had attempted to do what Disney had done. They had not attempted to create a huge theme park destination where guests would be immersed into their world. Universal took it a step further, and created several worlds that would completely immerse guests. In the beginning stages of the resort, Universal offered an “edgier” alternative to the pixie dust and magic of Disney, but still kept it family friendly.

The two parks have always been in competition for vacation dollars, but it wasn’t until Universal Studios Florida added Islands of Adventure, three on-site hotels, and an entertainment complex that Disney really started to pay attention. It was because of all these plans, that Disney went on a massive creative spree, making new hotels, opening up Animal Kingdom, two waterparks and expanding their Downtown Disney district.

Because of the constant expansion of Disney, Universal kept looking at more aggressive plans to try to take away from some of those family vacations that Disney would have, and try to break them out of the locked in plans for at least a day or two. When Universal and Disney started matching each other with unique attractions, parks like SeaWorld (who had been doing their own thing with animals since the 70’s) started to notice, and began adding massive coasters, huge dark rides, and more entertainment options. Busch Gardens, too, got in on the fun. People might have been coming for Disney, but they were now adding more days to their plans, and venturing offsite to Universal, and SeaWorld and Busch Gardens.

Worldwide, other parks started to notice as well, and instead of just the record breaking coasters that appealed to thrill seekers, now you had more immersive entertainment that spanned all ages and guest types. Parks like Dollywood found a niche all their own, after creating more unique attractions that mixed exciting thrills with family fun. Even parks like Six Flags and the Cedar Fair chain started scaling back on their massive coasters in favor for more family friendly attractions.

You can argue that this would have been the way of things, eventually, but with major destinations, both pulling in millions of visitors fighting for market share, it seems to have happened sooner rather than later. Universal is seeking out new properties to base theme park attractions on, and is doing quite well with properties like Harry Potter, Transformers, and Despicable Me. Disney has a very rich property base to mine from, which has grown exponentially with the addition of Marvel, Pixar, and Lucasfilm.

The bottom line, Universal moving to Orlando was a good thing, not just for the tourism industry in Central Florida, but for the amusement and entertainment industries as a whole. Without the rivalry (albeit friendly) of Disney vs. Universal driving each company to excel, the guest experiences in and around Orlando wouldn’t be as rich as it is.

Check out the other parts in our “Universal 25th Anniversary” series, in which we talk about the past, present and future of the resort!