The Wizarding World of Harry Potter at Universal Orlando celebrated five years of magical existence in June, with it’s fifth birthday happening on June 18th! The first Wizarding World at Islands of Adventure set the standard for theme parks around the world, including the eventual expansion, Diagon Alley. In addition, Diagon Alley is celebrating one year since the massive expansion opened at Universal Studios Florida, giving guests a chance to see dragons, and take a ride on the Hogwarts Express by way of Kings Cross Station. To celebrate the anniversaries of the Wizarding World, we are going to take a look at one of the real life locations that inspired the theme park world, namely, Kings Cross Station. How does it look in real life, and how does it differ from the theme park version? You’ll be surprised by the insane details that Universal’s Creative team put into the look of the area. 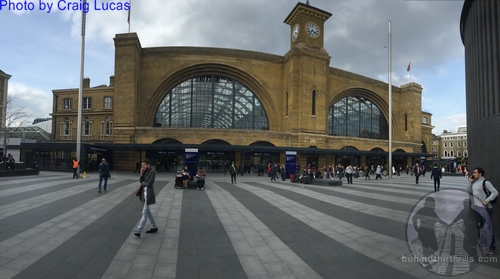 Kings Cross Station in London, is a world famous railway station. Trains go in and out of the train station, which serves as a central hub. It’s also one of the most famous locations in the Harry Potter series. Here, Harry Potter gets aboard the magical train, The Hogwarts Express. The station is used by “Muggles” (non magic folk for the uninitiated) for daily travel on a series of platforms, and is used by Witches and Wizards to get to Hogwarts School of Witchcraft and Wizardry by means of Platform 9 3/4.

While the place is real, does it really have a Platform 9 3/4? Can we really get to Hogwarts from there? Our friends Craig Lucas and the Unofficial Universal Orlando Podcast went to help us find out!

Video-Take a walk through Universal Studios Florida and the streets of London as we compare Kings Cross Station!

Universal Orlando spent many months researching Kings Cross Station, and brought together a very realistic version of the landmark that is seen in the Harry Potter films. The outside of the main building, especially, is a near replica of the original version. However, unlike the original version, Universal has brought more London landmarks to share the area with. So how do the two actually compare? 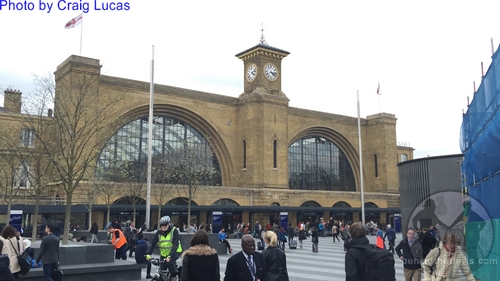 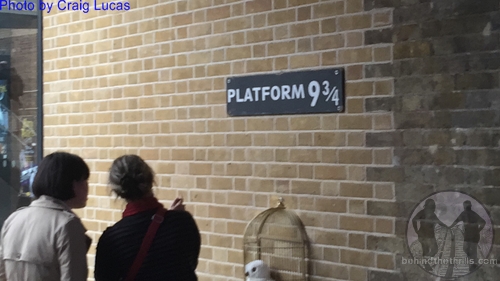 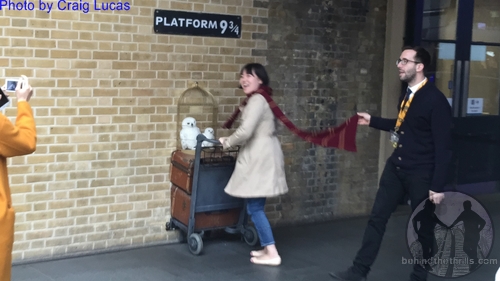 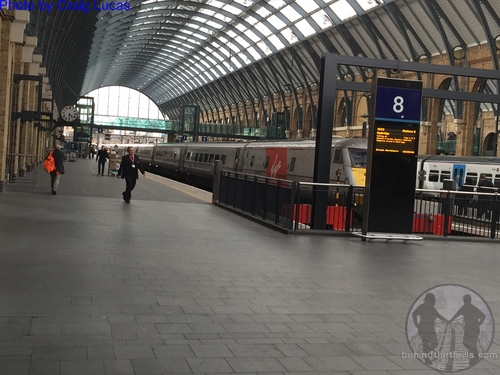 In London, Kings Cross sits pretty much alone in a square, with no other buildings adjoining it. While there are buildings near, they aren’t as close as they are in Orlando. Platform 9 /34 is very much present in the real life world of London, but it’s a photo opportunity, created after the popularity of the series grew so much, that it became a necessity. The actual train platform is a bustling port of transportation, with trains going in and out all hours of the day, and people streaming all over the place, on all sides. It also has a very modern look, despite the building being constructed in the 1800’s. 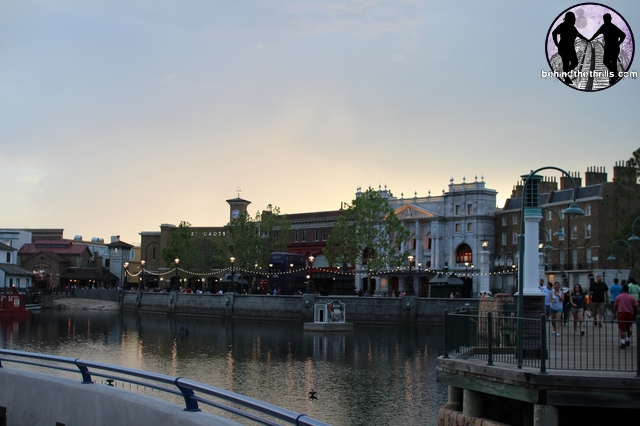 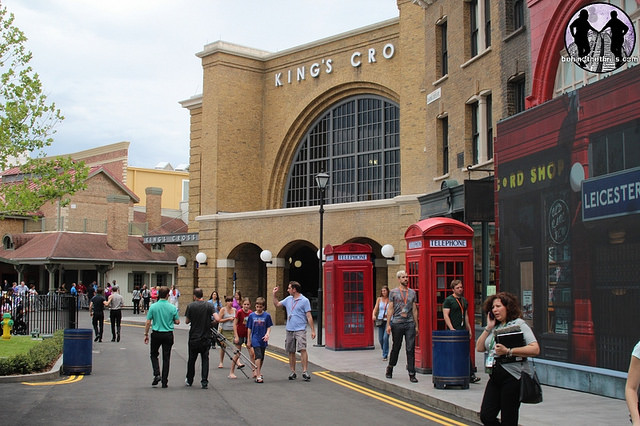 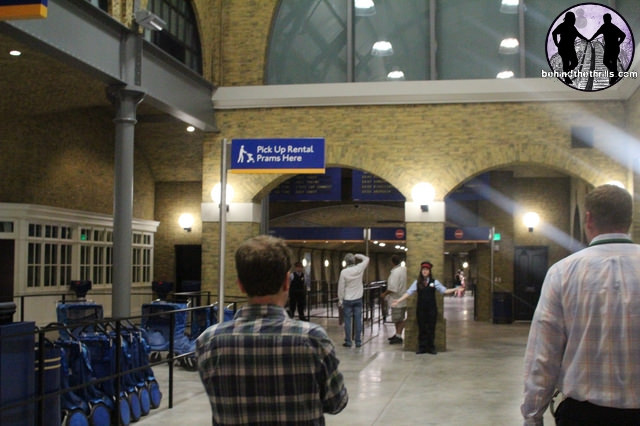 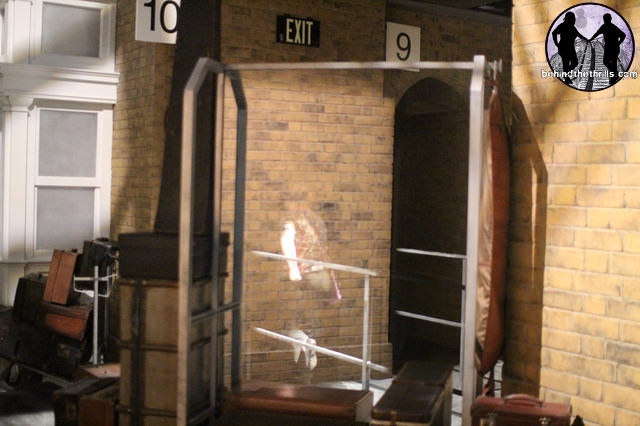 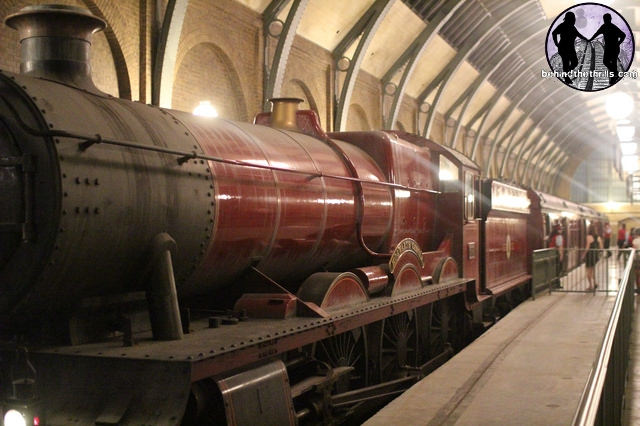 The Orlando version shares the skyline with other London Landmarks, such as Piccadilly Circus. This was done to create the feel of London, and give guests an overall introduction to the architecture of the city, before they step behind the bricks and venture into the world of Diagon Alley. The facades also serve as a very much needed cover for the hidden Wizarding World. Diagon Alley works as an experience because, like in the books and films, it’s hidden from Muggle eyes. Once you’re behind the walls you are completely shut off from the rest of the theme park, not able to see any of the other rides and attractions.

The station itself is a recreation in spirit. It’s much smaller (naturally) and reflects more of a bright and cheerful theme park setting than every day life, like the real station represents. After all, you are going to Hogwarts! It does feel like you could go to any other destination in the world, but we all know that Hogwarts is where we really want to be. Where the original reflects a more modern time (after all…it is the real world) Orlando’s version reflects a bygone era, and uses things like analog schedule boards, and other fun throwbacks that you may not see in the real version. Platform 9 3/4 is present, but it’s real! Guests actually disappear through the wall, done with some Muggle magic, as onlookers take pictures.

The Platform itself is almost a direct recreation…of course, much smaller than the real thing. Instead of the hustle and bustle of many trains, it uses only one, and it’s the only one that really matters! The Hogwarts Express takes up the entire platform as conductors scurry about getting Muggles, witches and wizards to their destination.

Overall Universal Orlando does an amazing job recreating the general look and feel of Kings Cross Station. It’s nowhere near as big, simply because it doesn’t have to be, and it’s a theme park. It does an amazing job transporting guests into the feel of the film and book series. On the other hand, visiting the real Kings Cross Station does something that the theme park destination can’t. It takes you to the real places that inspired the books and where the films were made. You can’t get that experience and feeling anywhere else, though Universal does get you VERY close. Both locations are worth a trip for any Harry Potter fan, and both locations capture the magic and spirit of the film.

Special thanks once again to Craig Lucas and the Unofficial Universal Orlando Podcast for helping us to take this tour!