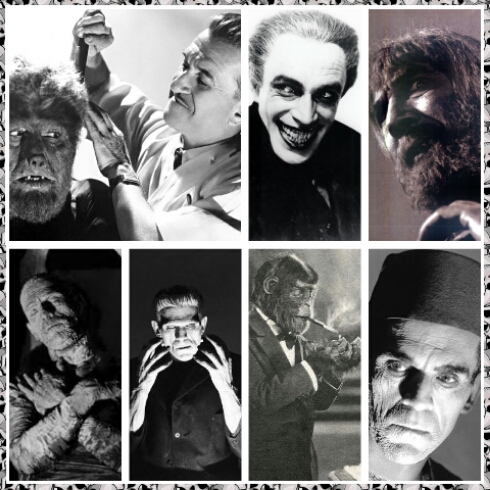 It can be argued that the entire line up of Universal’s Horror Monsters and Universal Pictures dominance over the horror genre that resides even today can be traced to one man- Jack Pierce.

Born in Greece, Jack Pierce immigrated to the United States and became a cameraman at Universal Studios. He would help to create props for films as well as help create makeups. Pierce’s first makeup for a feature film was the Monkey Talks. Pierce was assigned to create a realistic ape piece to be worn by the lead actor including a muzzle, ears, and various face pieces to help make the “chimpanzee man hybrid”. With this makeup, Pierce established himself as an artistic force to be reckoned with in Hollywood. He also worked with actor Conrad Veidt on makeup for the film ” The Man Who Laughed”. Veidt’s makeup would become the base for one of the most iconic pop culture villains of all time- The Joker.

Soon after, Pierce was hired to design the make up for the film Frankenstein. Author Mary Shelley’s work gave little description of the monster and this description bears little resemblance to the now classic green tinted, bolt necked, recognizable Frankenstein monster that Jack Pierce designed. Jack Pierce was quoted as saying:

“I did not depend on imagination. In 1931, before I did a bit of designing, I spent three months of research in anatomy, surgery, medicine, criminal history, criminology, ancient and modern burial customs, and electrodynamics. My anatomical studies taught me that there are six ways a surgeon can cut the skull in order to take out or put in a brain. I figured that Frankenstein, who was a scientist but no practising surgeon, would take the simplest surgical way. He would cut the top of the skull off straight across like a pot lid, hinge it, pop the brain in, and then clamp it on tight. That is the reason I decided to make the Monster’s head square and flat like a shoe box and dig that big scar across his forehead with the metal clamps holding it together.”

After studying and sketching for months, Pierce had to sculpt, mold and design a makeup to fit the actor Boris Karloff. Jack Pierce’s artistic process is very detailed. He would build the makeup each day from scratch, and every day the Frankenstein makeup was a brand new creation. To create the vision, Pierce covered Boris Karloff’s head with a bald cap and then spent about six hours constructing a forehead layer by layer with collodion soaked cotton. Pierce attached metal clips to Karloff’s ears (scarring the actor in the process) and sculpted wax eyelids to make his eyes appear to look sunken.After studying decomposing bodies during his process of design, Pierce added a macabre touch by blackening the tips of Karloff’s fingers.

Jack Pierce, much like the character of Dr. Frankenstein, would become a creator of artworks that would be so forever ingrained into the minds of film goers. “It’s amazing how iconic those makeups are….Jack Pierce creating the makeup on Karloff for Frankenstein. It’s as iconic as the Empire State Building- it’s a beautiful art deco work of perfection”
Pierce also worked on the 1932 film The Mummy. The story was about an entombed mummy brought back to life so the creature needed to appear to have been buried for thousands of years. Pierce acquired pictures of the recently discovered mummified remains of Prince Seti of Egypt and based his artwork on those remains. Jack Pierce (again using Boris Karloff as his medium) sculpted a near perfect recreation of the famous Egyptian mummy. Each wrinkle on the face of the creature required that the actor stretch out his skin, while the artist would lay a piece of cotton on the face of the actor. When the skin was relaxed the material would wrinkle. Paint was added for color and to show the effect of dryness. In total it was an eight hour process to sculpt this moving piece of art, with an additional hour and half to remove it. By using an object (cotton) not commonly used in art, Jack Pierce had created an assemblage sculpture that looked incredibly lifelike.

Like most artists, Pierce had his quirks and his methods which were not always appreciated by actors or the film studios that employed him. These legendary artworks would take hours and require much patience from the actors. Most painters and sculptors do not have to work on a canvas with a personality and who doesn’t want to stay still. It was rumored while working on makeup for the Wolfman, the actor ; Lon Chaney Jr., became angry at Pierce and his assistant because the headpiece and makeups were uncomfortable and time consuming to apply. Chaney had a hatred towards Jack and it was rumored that Pierce retaliated by being none too gentle with the makeup applications. Chaney was quoted as saying “ What gets me is that after work, when I’m hot tired and itchy..I’ve got to sit in that chair for 45 minutes while Jack just about kills me, ripping of the stuff he put on me in the morning” Legend has it, when Pierce asked Chaney to sign a photo, Chaney inscribed it “To Jack Pierce- the biggest goddamn sadist in the world”.
By the end of the 1940s monster films had gone out of fashion and the alien invader film became en vogue. These films were made inexpensively in part due to innovations in the makeup department. Many of the creatures in these films were made of rubber and latex suits. Rumor has it, Pierce, the godfather of makeup was fired since he took too long to create the makeups. He died in the 1970s, in near poverty, his last work being on the Mr. Ed Show.

While Pierce has no Oscar or star on the Hollywood Walk of Fame, his legacy lives on. His work inspired countless artists and directors to create countless pieces of cinema for the next generation. Pierce, like so many other great monster makers, is immortalized at Universal Studios Florida in the Horror Make Up Show, where his make up case is on display. In fact, the legacy of Pierce can be felt everywhere at Universal, from the classic monsters in Monsters Cafe, even to the terror that springs to life every September at Halloween Horror Nights.

Tune in every Monday for more Monster Maker mayhem, where we will explore different people from the haunt industry, and the monsters the create.

If you know of someone you’d like to see featured, or if you make monsters yourself, email us at Staff@behindthethrills.com.
Stay tuned for more Monster Mayhem, and be sure to get social with us on Facebook and follow along with us on Twitter @BehindThrills for the latest updates!
For more information about monsters of Universal Orlando, including tickets, visit the official website by clicking here!