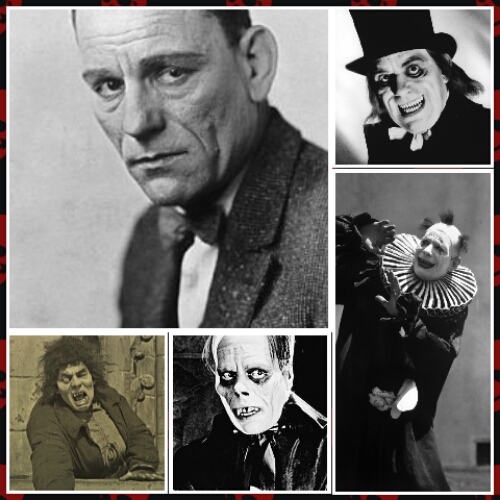 Horror and haunts would not be the same if Lon Chaney had never been born. accredited to Lon Chaney. Born in 1883, Leonidas F. Chaney was born to deaf and mute parents. It was because of this, he was adept at communication without words, using movement, which lead to an acting career. Chaney realized that by changing his appearance with makeup, it vastly improved his chances of landing a variety of acting roles. He carried a makeup case with him to auditions and on location during filming.

The case held makeup, grease pencils, wax, powders and nitrocellulose. Nitrocellulose is a substance made from cotton powder, alcohol and ether. When nitrocellulose is applied to the skin it forms a bandage like material which Chaney used to make wrinkles, scars, and burn marks.
While the art world was a flutter of Brancusi’s Bird in Space sculpture in 1923, the movie going public would be in awe of Lon Chaney’s makeup for Quasimodo in The Hunchback of Notre Dame. This makeup for the 1923 role was of Chaney’s own design. He transformed himself into Victor Hugo’s hideous disfigured human, terrifying audiences. The three hour process to prepare this artwork included the application of glaring eyes, a mouthful of broken teeth, and forty pound rubber hump.
Chaney’s iconic creation however, was the creature from Phantom of the Opera. His character’s sunken eyes, turned up nose and elongated forehead frightened audiences.
“He created the Phantom’s skull-like visage by using cotton and collodion for his exaggerated cheekbones. By attaching a strip of fish skin to his nose, he achieved the up-tilted effect on his nose. He used black paint to accentuate the nostrils and wore a serrated set of false teeth.”
It is believed by historians that in order to create this ghastly appearance he would place “…pieces of wire to make the eyes lower into an almost sunken state”. His face and body was a medium for art, quite similar to a performance artist. It would be his special makeup artistry throughout his film career that would grant him the moniker “The Man of a Thousand Faces”.

By many accounts, Lon Chaney did not reveal his artistic method to anyone. His son, actor Lon Chaney Jr. claimed, “father would keep his makeup dressing room closed off to everybody and when he needed to make changes filming was stopped, he went alone to his room and would only emerge when he was satisfied with his work.” He did not share his techniques and it’s believed that many of his artistic methods died with him when he passed in 1930.
Though his make up secrets might have died with him, his legacy lives on. Many have studied his films, and have recreated the looks and feel of Chaney’s creations. He helped to usher in Universal Studios own Golden Age of Horror, with his character transformations.
Fans can still see examples of his work in places like Universal Studios Florida, where his work and methods are featured prominently at Universal’s Horror Make Up show.

Tune in every Monday for more Monster Maker mayhem, where we will explore different people from the haunt industry, and the monsters the create.

If you know of someone you’d like to see featured, or if you make monsters yourself, email us at Staff@behindthethrills.com.
Stay tuned for more Monster Mayhem, and be sure to get social with us on Facebook and follow along with us on Twitter @BehindThrills for the latest updates!
For more information about monsters of Universal Orlando, including tickets, visit the official website by clicking here!