Riders get stuck on The Orlando Eye, firefighters rush to the scene

The Orlando Eye is having some major growing pains, as the 400 foot tall observation just can’t seem to catch a break. The observation wheel was down for over 30 hours just after its’ grand opening in May.  The Eye has had a few stops and starts, but Frida was a doozy. Several riders were stuck on the Orlando Eye for a few hours. Firefighters were even brought in, with climbers ready to rescue, but thankfully guests were removed from the Eye safely. 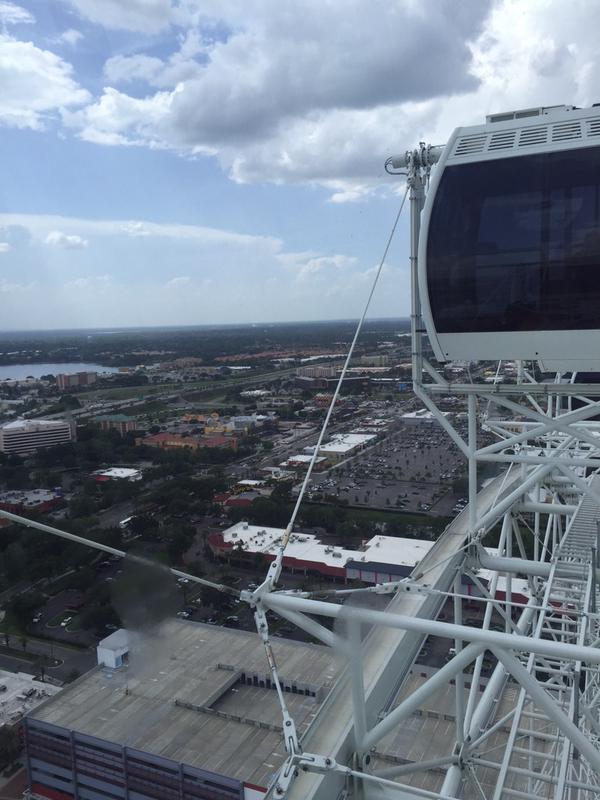 While it’s common for attractions to have problems the first year they are open, The Orlando Eye just seems to be getting a ton of attention.  Firefighters were called on the scene, and rescue climbers were ready to go, however,  it wasn’t necessary.
Riders, some of which were stuck for about three hours, we’re taken off one by one, as a power issue caused the Orlando Eye to stop functioning.

A statement was issued by The Orlando Eye team:

At approximately, 3:45 p.m. the operating systems for the Orlando Eye indicated a technical default with the system that…

Firefighters were brought in, with a specially trained group to bring guests down, if needed. Fortunately they weren’t needed. Instead The Orlando Eye was able to get a backup system online, and bring guests down, one car at a time.

The Eye had to be lowered one car at a time, and the cars had to be opened by hand. Staff had to get on ladders, and manually open the doors. Overall the entire ordeal was about three hours.

While the ordeal was definitely a stressful one, guests weren’t in any danger of falling, being hurt or injured at all. They were simply stuck. Granted, the air conditioner was out, and the Florida sun can be a little brutal, especially when surrounded in glass, but overall the experience wasn’t anything extremely dangerous. The Orlando Eye has worked with local authorities to train a group of specialists for this very occasion. If backup power on The Eye had gone down, and guests were unable to make it off the observation wheel, then the team would have been able to get guests off, albeit at a much slower pace.

While the idea of being stuck 400 feet in the air may be distressing to some, it’s not a common occurrence. The London Eye has not had any major issues in it’s history, and uses the same type of system.

Stay tuned for more from The Orlando Eye, and be sure to get social with us on Facebook, and follow along with us on Twitter @BehindThrills for the latest updates!

TAGAccidents I-Drive 360 The Orlando Eye
Previous Post40 years after JAWS- Save the shark that terrorized millions Next PostRoads? Back to the Future turns 30, blazes a path for movie and theme park standards