Located in a small basement just walking distance from the epicenter of Comic-Con featured one of the most interesting panels of SDCC this year. Taking place at Zachary Levi’s Nerd HQ, the BattleBots panel featured an exciting live demonstration as well as a look at what goes into creating the deadly machines featured on ABC’s newest summer series BattleBots. It also reminded us why shows like BattleBots are so important this day in age attempting to inspiring a new generation of engineers, mechanics, and special effects artists. 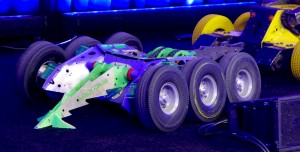 For those who are new fans of BattleBots, the idea of fighting machine/robot tournaments has been around for over 20 years – being featured on various PayPerView events, a beloved 5-Season television show on Comedy Central, underground events and now currently in the national spotlight on ABC. 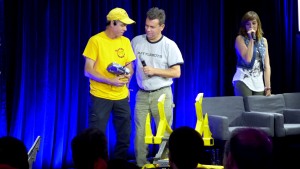 The panel begun with the introduction of the bot builders as well as went into their backstories a bit and went in almost immediately into discussion regarding a few moments in the show that might have appeared staged (one team putting a net in a box as an entanglement device creating a bit of controversial drama in the show).

Most importantly it reminded us why shows like BattleBots are so important for the next generation of engineer, mechanics, and that you don’t need huge sponsors or MIT Robotics degrees to participate. BattleBots is a sport that anyone can participate in regardless of age, athletic ability, financial status. It’s a glorious fight to the death with awesome robot destruction and to be honest, who wouldn’t love that? To see more from the panel, IGN was able to post the entire panel on their YT channel.

BattleBots is currently airing on ABC every Sunday at 9pm. It was stressed that as long fans keep watching, season 2 is only a matter of “when” and not “if” being the highest rated show in it’s current time slot. If you havn’t seen it yet – you should. It’s one of the most fun shows currently on TV.

That does it for our coverage from the BattleBots panel! There’s so much more coming from SDCC this year so stay tuned and be sure to get social with us on Facebook, and follow along with us on Instagram and Twitter @BehindThrills for the latest updates!